Lt. Fly vs the Spiders from Above 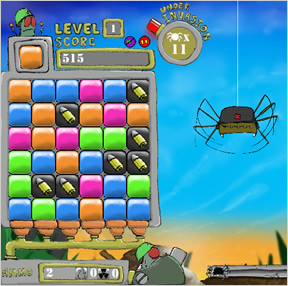 Fall in, troops! It seems we've got ourselves another attack on our hands. Menacing spiders are descending from the skies, and it's up to our platoon of cannons to stop them! We've got to divide our forces to gather bullets on one side, and shoot down the spiders on the other side, so you'll need to divide your attention to win the battle!

Lt. Fly vs the Spiders from Above is a combination puzzle/shooter game that will leave your head buzzing. On the left side of the screen (company, left face!) is a block puzzle with a light twist. At the top left of the board is a fly holding a block of one color. Clicking anywhere within the grid will replace that block with the color designated. If you create a cluster of four or more similarly-colored blocks, they will disappear, leaving the rest of the blocks to topple down into place, and possibly cause some delightful combo action. Also in the grid are special blocks with bullets, flamethrowers, and bombs. If you work these blocks to the bottom of the screen, they get added to your arsenal of ammunition.

That ammunition gets used on the other side of the screen (company, right face!). Using the fly-operated cannon at the bottom-center of the screen, simply aim and fire at the spiders descending from the sky! You'll have to be careful, since your cursor will disappear once you cross into the right side of the screen. Keep an eye on the angle of the cannon's elevation (or just get used to blindly mousing around), or else you'll waste precious bullets. If you defeat enough spiders, you'll move on to the next invasion, where more of the creepy-crawlies await!

Analysis: I'm a fan of multi-tasking games, and this one successfully blends together two contrasting genres: the strategic puzzle and the fast-paced shooter. My one complaint about the game is the fact that the randomness of blocks on the left-hand side doesn't seem to be very consistent (sorry, did I just mention "consistent randomness"?). What I mean is, in playing this game, I've often found myself with a whole stash of bullets one moment, then none the next, without a single bullet on the board to attempt to claim. But then again, this could be an intentional feature of the game. After all, how fun would it be if all you had to do was stock up on bullets in one level, and coast throughout the rest of the game?

So if you're ready for your first mission in insect warfare, then forward march!

Play Lt. Fly vs the Spiders from Above

This is a fun game, but the music was just terrible and repetitive. Turn that sound off ASAP, soldier.

Phew! 48165 was my final score - no one else has posted so not sure where that ranks. Only know I'm pretty tense now! I agree that the wait for the blocks to match up could be a problem at times, but I think it's intentional - part of game play strategy seems to be balancing attacks on spiders with snatching up med kits and using up bombs. Surprising amount of strategy involved. Really enjoyed this. : )

Final score of 293.730 over here after completing the game...actually, I was quite (positive) that it's no game without goal that keeps on going forever.
It could need a highscore, but well, not too important.

I like the strategy and the idea overall - thinking while shooting evil spiders (from above) at the same time is quite challenging :)

I disagree with fuzzboxer. I quite liked the music... there is a fine line between catchy and infuriating but I thought this game trod that line quite well.

Nice to see a puzzle game that ends, too. Even though puzzle games don't usually hold my attention for more than a few minutes, I kind of stuck ths one out because of the sense of a storyline (and i use that word loosely, but to feel like clicking on coloured blocks was making my fly army conquer spiders through the cutscenes was great.

I like the idea but it gets boring pretty soon.

Biolarzen, after a while, it gets to the point of being a lot harder, so the pace keeps it exciting.

Great game, quite difficult as you get farther.
I achieved a final score of 118,805 points, with frantic clicking and going back and forth.

It's a ncie idea, well produced and finished.

ne can keep clicking on a block until it turns the colour he wants, except that a block will nto change to the colour it already is, os that is the exception to the rule, but it's still that way..

This game made me totally nuts, but in a good way. Do I wait for the blocks? Or demolish spiders? It's tough as there are more and more spiders coming in, especially as they get harder to kill. Great game!

I like the way you put it, KL: should I be matching blocks or killing spiders? Well, if you don't have any ammo, the choice is obvious. But at other times you have to divide your time well.

I didn't like how the flamethrower couldn't reach the upper-right region.

that was quite fun. i like the nuke and the flamethrower. although i used them more as novelties early on, by the end i was relying on them for when i ran out of ammo, which i did often. sometimes i would be holding a steady 3 spare shots, sometimes 20. thank goodness it ended though, i was out of nukes and flamethrowers and was running out of bullets with none on screen XD

I had this weird bug where the blocks would appear to be one color, but weren't actually that color (a red block would appear orange, for example). This means I'd have four of one color in a row, but it wouldn't disappear. The bug made this game almost unplayable, especially when you need to know where to place a block in order to get the bullets within seconds.

My score after completing the game was 368685. I had to deal with the same bug Andrew dealt with, which was a little annoying. While that didn't take much away from the game from me, though, the overall gameplay did.

The issue I take up with the game is the ease with which you can complete it. If you focus your shots purely on the little first-aid packages and just keep playing the puzzle, you can easily stockpile your shots and special items for later in the game. At the end of the game, I think I had 5 flamethrowers and 9 nukes.

It took me 3 tries to figure out this winning strategy. Getting more points is just a matter of dragging the game on, which I think you could probably do by making the first few levels last for a VERY long time.

I think if the packages were dropped based on maybe a percentage of spiders killed vs. spiders released or something to that effect, the game wouldn't be nearly as easy.

Quite fun, for a while. I scored less than a lot of the people above (185450), but was already getting bored near the end.

I'm searching for a save option or a level code so I can replay another day without sitting through the early levels again. Ah well.

I finished off with 311535 points and found the game, as crawford did, to be remarkably simple. I was actually messaging somebody in another window as I played this game and finished off with full health. Very good game, would be great to see it go longer. The only problem I had was the inability to place blocks quicker when combos were stacking up. A minor annoyance if anything else.

Anyone else have a bug where the cursor disappears from the left side of the game as well? It happened around level 16, then I lost :(

I've also had the right side freeze entirely while the left side allowed you to continue racking up the points. It's a good concept, but the bugs pretty much ruined it for me. (Pun intended.)

Cute idea, but SO buggy. It wouldn't let me trace squares sometimes, and some "colors of four" ...weren't. In my tutorial alone, three blues and one green was a set. What the heck?

I beat the game with 267,770 points. On level 13 I started taking heavy damage, but I think that was because I found it too easy before that and only had to start multi-tasking on level 13. I managed to do this and finished the game.

I agree with whoever it was above that said the music needed to go. It was driving me crazy.

Thanks for all your comments guys!

We have a sequel which has been released in Shockwave.com, check it out at http://www.shockwave.com/gamelanding/ltflyrescue.jsp

We look forward to your honest comments and ratings!

If you're going to link to this game from today's Mobile Monday, you should know that this link is dead.

It was a cause of great sorrow.

[Fixed. Thanks for the note! -Jay]