Though currently only in Alpha demo stage, Lune, a unique adventure puzzle game by the appropriately named Team Lune, is still worth a gander. Using just [WASD] or the [arrow] keys, you control the moon itself, from its size to its ascent in the sky, and thus affect the world around you with light and the tide. Of course, you are not the moon. (Which is a good thing, because if I personally were to be the moon, it'd be a lot less serene ambient puzzle solving and a lot more DAWN OF FINAL DAY.) You're a young girl who seems to have the mysterious power to shape the moon to her will, and you can click anywhere on the ground to make her move there. As you explore, you'll come across certain objects you can interact with as marked by a dialogue box that appears overhead when you draw near, allowing you to click to select a choice to enact. Figuring out how to proceed also means figuring out how to use the moon's power to your advantage, such as manipulating light and shadow, or bringing the tide in to flood an area with water. Which just goes to show you how unrealistic this is because everyone knows they would only use the moon for supreme acts of laziness or indulgence, like moving it out of the window so you could sleep without its light in your eyes, or making an endless stream of artsy Facebook selfies. 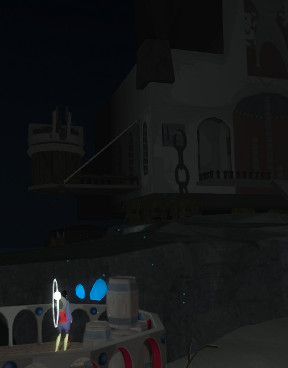 Right now the biggest obstacles to enjoyment can come down to a lackadaisical camera that's more interested in slow, sweeping, theatrical shots than actually helping you as the player, and some slightly awkward movement. Lune has such a great concept and the sort of enviably immersive atmosphere you wish more games had that it's a shame that it doesn't showcase a bigger variety of its potential gameplay in this demo early on. You'd be forgiven for thinking our heroine is wasting her power by early on using it only for a few obstinate block-pushing puzzles, and the game's stubborn lack of directions means some players may find themselves floundering around and frustrated before the game really shows off its chops. Beautiful? Sure. The sound and striking use of light and shadow combine to create a game that at once feels both ominous and peaceful in an otherworldly sort of way, and one you want to learn more about. If lovely, clever puzzle-solving to let yourself sink slowly into is what you seek, then give this demo a try. We can't wait to see the final product.

Man, I am so stuck! First, I just didn't know what else to do. Second, I literally got my character stuck!

In the room with the robots, I filled each basin with the purple fluid and pushed each onto a blue circle on the floor. Either that or getting the moonlight to hit all four in that position got the robots to sit down. I don't know. After that though, I didn't know what to do. I finally ended up pushing each basin against a robot (moving several robots into a wall. gliiiitch!!). When I had two basins against each other and tried to get in between them to see if I could do it, my character got stuck and I had to quit.

Not too bad of a game. It's really slow moving and I'm not too fond of the mechanics. The game doesn't always distinguish between moving a character and trying to select an option for interacting with an object. It would be nice to know what exactly I'm trying to accomplish as I play, especially with the "puzzle" I got stuck at. I really like the atmosphere, though; and the concept is unique enough to keep my interest. I just hope the bugs are fixed and someone leaks how to solve that puzzle!

not a fan of games that demand fullscreen without giving you an option...

I couldn't agree more with the review. But this is what alpha versions are for, right? they'll probably sort these things out :)

Wow, really very promising. It has the beautiful aesthetic of Kentuck Route Zero and similar feel to the navigation dynamic but, yes, extremely hard to use with my very slow computer.

However, as Diego says above, this is exactly what Alphas are for and if this gets quicker & a tiny bit slicker I for one am incredibly excited.

it is too slow. And I dont like the full screen stuff myself as I have other things going on at the same time I am playing a game.

I wish there was a way to control the camera angle (like a panning function) for times when I just want to enjoy the scenery or look around to see which direction I should head before having to walk 'slowly' over to it. The speed of the game makes me dread going a second round just to see the end.

My browser froze with a "Fatal error in gc: GetThreadContext failed" when I entered the final cut scene. [Opera 12.15, Windows 7]

The camera angle also got stuck when entering the penultimate room. I had to exit fullscreen mode and return to get it to move again.

Otherwise, the game is really beautiful and shows a lot of promise.