Fear is the mind killer. Fear is the little death that brings total obliteration. I will face my fear... Phew, am I glad my mother was a Bene Gesserit witch, otherwise the new Luxor would have driven me over the edge a long time ago (that is a Dune reference, for those at a loss). And in good-old balls-on-the-roll fashion, Luxor: 5th Passage soon enough puts you in positions where staying cool, calm and collected spells the difference between victory and disaster. That and a few lucky power-ups... 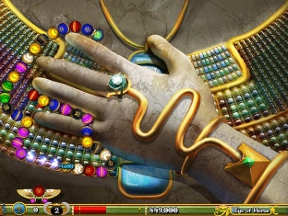 Are there still those uninitiated to the style of match-3 game found in Luxor and Zuma? Even during this review, someone looked over my shoulder and posited why I don't just copy-and-paste an older Luxor review. It is, after all, the same game: a string of coloured balls are pushed along a track towards a hole at the end — the player fires a ball into the arrangement, causing sets of three or more to disintegrate; the aim of the game is to destroy all the balls before they reach the hole (and the sooner, the better, as another string will roll onto the track soon).

As the name suggests, this is the fifth outing of Mumbo Jumbo's popular series, but in terms of changes it seems to sidle sideways, not forward. This isn't a bad thing. It would be with a different genre, but as I alluded to earlier, this is not a game that changes much at all — and it shouldn't. Like any good puzzle mechanism, be it Tetris or Solitaire, there are only a finite amount of tweaks you can make before you risk changing the formula so substantially that it won't register with fans (the proverbial "if it ain't broke..."). To Mumbo Jumbo's credit, each release of Luxor did reshuffle where it can. In 5th Passage the game modes have been stripped down to a more spartan selection, story mode has vanished and the power-ups have been tweaked to give a more constructive set you can work with.

Most of the regular power-ups are here: the ball-munching scorpion, the always-welcome colour bomb and genre staples like the ball-evaporating lighting strike and slow-down/reversal effects. There are a total of fourteen powerups, but unlike the previous Luxor they are much less convoluted and do exactly what they say on the label — technicalities such as impact radius have been left to the game (or your imagination). The game-modifying artifacts are also nowhere to be seen, nor is there an upgrades shop and as mentioned there is no 'adventure' — or story — mode. 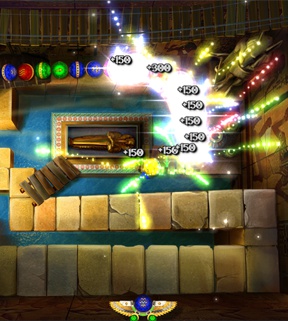 But that probably makes this the best Luxor to get your hands on. Sure, all that extra stuff that featured so prominently in the fourth game, Quest For The Afterlife, made things interesting, but 5th Passage takes the series back to its roots and then establishes it with a very balanced selection of power-ups, as well as some truly challenging levels.

Well, 'levels' is a tad liberal. Luxor seems to recycle its settings often and you will encounter the same screens several times during the 100-level Adventure mode (despite the name, there is no story), though they still represent a lot of variety amongst them. For a different challenge, Blast Mode pushes you to get the highest score possible in two minutes, and People's Choice is a collection of the best levels from the series. The difficulty comes in how the balls are arranged, how fast they are moving and those truly harrowing levels with two lines coming at you (as well as four difficulty settings with appeal for newcomers through to salted Luxor-veterans).

To be fair, the previous Luxor game is probably a better bet for new players, because it adds a lot of window dressing that attracts people seeking something beyond the match-3 challenge. Yet 5th Passage represents the best unification of Luxor's core, sticking to a series of great powerups and smart levels. If you preferred the earlier Luxor games, 5th Passage is right up your alley, because it combines the best ideas from the first three games. With a big emphasis on how well you score, not to mention the introduction of achievement trophies, the new Luxor is geared towards series purists. In fact, if they just called it Luxor: Hardcore Fan Edition, it would explain exactly what you get. So start practising that mantra:

I must not fear spheres.
Fearing spheres is the mind-killer.
Spheres are the little-death that brings total obliteration.
I will face my fear of spheres (preferably with a color bomb).
I will not permit spheres to pass me.
Because when the spheres have gone past I will turn the inner eye to see their path.
Where the spheres has gone there will be nothing.
Only I will remain... until the next row arrives.

(with apologies to Frank Herbert)

Ehi, the puzzle mode was very interesting, for me the better version was the 3rd.