Certain things are only funny when they happen to someone else, like taking a big gulp of spoiled milk, or faceplanting immediately after yelling "Hey, watch this!" or getting trapped within a plague ridden town that's slowly sapping the life out of its inhabitants. Maestro: Music of Death is a new horror hidden-object adventure from ERS Game Studio where you are once again called in as a "paranormal expert" (are you sure they have a right person?) to solve a strange mystery near Paris. You know, the sort of mystery that tends to wind up with you a dried and dessicated corpse in a ghost town somewhere? Those are my favourites. 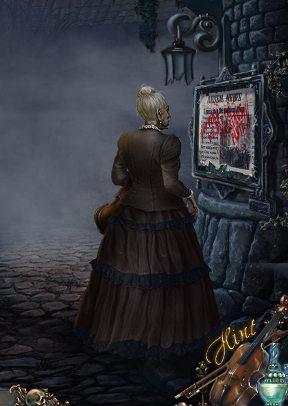 Your investigation appears to be off to a rocky start when the guards at the city limits refuse to let you pass. Some sort of plague, they say, and they're not willing to let anyone pass; not you, and certainly not the distraught woman who begs you to find her daughter who got left behind with her governess. Of course, they're soon not in any position to stop you, and as you begin to search the city you get a sneaking suspicion that this "plague" may not be natural. (Gee, what tipped you off? The crying clouds of damned phantoms? You're so smart.) Gameplay is your typical point-and-click affair, although players who don't enjoy hidden-object hunting that much may be put off by just how many of them there are. Find clues, solve puzzles, and eliminate the source of the plague before you become just another dead beat. HA! Dead beat! Geddit?... well, uh, 'cause the game is "Music of Death", and... beat, like a note, and... um... oh, forget it.

Analysis: While it's nice to play a feel-good, family-friendly hidden-object game once in a while, usually all I really need to feel good about my casual game purchases is a theater full of emaciated corpses. That's not so hard to provide, right? (Then why won't any developers return my messages?!) Scary sells, and nobody seems to know this better than ERS Game Studios, whose last batch of games have been a string of creepy-cool titles. Maestro: Music of Death is another solid addition to their roster. It boasts a weird, over-the-top story that's rich with unusual environments, all rendered with fantastic artwork and attention to visual detail that makes them look and feel much more in-depth and animated. 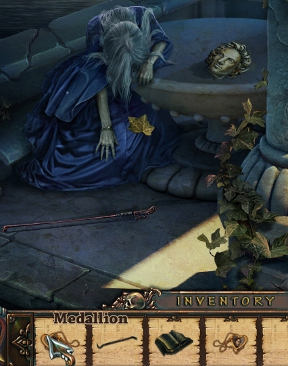 As much as there is to like about Maestro, however, there are minor annoyances. You'll have to backtrack and repeat hidden-object scenes more than usual, and some of the items you need to track down are, frankly, more than a little superfluous; I really need to get a specific item to get rid of a small pile of leaves? Really? I can't just, like... brush them away with my hands? Certain sound effects are repeated over and over again ad nauseum, and chances are even if you found the wispy ghosts and annoying, gasping sigh they give scary the first time, you won't the next seventy-five times it happens, over and over each time you enter particular areas.

Of course, none of these are game breaking issues; they're just mostly minor complaints, and shouldn't prevent you from checking out what really is a genuinely top-notch game. It's a unique mystery set in a location that's a lot of fun to explore. ERS Game Studio have really outdone themselves in crafting a series of environments that have an otherworldly feel, and while the story isn't quite as front and center as some of their other recent releases, it still makes for a very engrossing experience. While most of you probably won't find the difficulty level to be very challenging, admittedly not expects or even wants their games to be hard, and if what you do want is a beautifully made game with an intriguing plot and a room full of corpses, Maestro: Music of Death is definitely for you, and I heartily recommend you check out the demo.

3. Behind Town Gates - left side

4. Behind Town Gates - right side

6. Clean the way to the Theater

14. Turn off the water in the fountain

15. Using the Telescope/ unchaining the Boat

16. The Catacomb (through the vault)

17. Turning off the steam in the Catacombs

18. Way through the catacombs/Music tubes

22. House of the Smith Family

3. Behind Town Gates - left side

4. Behind Town Gates - right side

6. Clean the way to the Theater

14. Turn off the water in the fountain

15. Using the Telescope/ unchaining the Boat

16. The Catacomb (through the vault)

17. Turning off the steam in the Catacombs

18. Way through the catacombs/Music tubes

22. House of the Smith Family

any walkthrough for the continuation ?