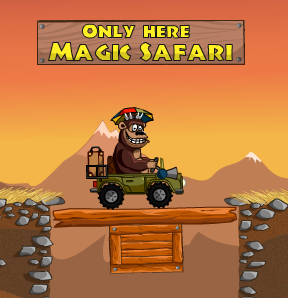 Magic Safari, a physics puzzler by Conmer Game Studios, stars an ape in an umbrella hat that drives a tiny car. Really, that mere fact is probably enough to convince most of the internet to check it out. But those less enraptured with simian propelled automobiles should also give it a try.

It's based around driving through levels that you can affect with four commands: [1] Destroy (which causes a cool explosion) [2] Gravity (which causes non-car things to get all floaty) [3] Shape Change (which transforms square objects into circular ones) and [4] Magic (which will reverse the gravity of the car). Considering that there have been games based around each of those commands individually, putting them all together makes for some interesting puzzles. Just execute all commands to clear a path for the vehicle, and then click on the car to drive on through to the next level. Pressing the number keys on your keyboard acts as a shortcut to changing commands, and note that you cannot cast commands while the car is in motion.

At only twenty five levels, Magic Safari goes by pretty quickly, and, by the end, you'll be wishing the ape would step on the the friggin' gas a bit when you know you've solved a level. On the other hand... ape in a tiny car. Lest we forget.

Cannot get beyond level 14 � have tried a dozen times. Can get beyond the spikes, but the Jeep never has the power to continue past the angle of the log.

Think about making the car ride on a car!

You need to change the shape of the boxes under the log, then destroy the box the jeep is sitting on, it will then be sitting on your log/wheels construction then when you have gravitated the bomb to beside the car it will roll over (I know I know, I think I just made a verb out of gravity!)

(POP) Thanks yaddab, but actually it's much simpler than that - I just needed to step on the gas...

I've found the 3-star times to be too tight. Kind of frustrating to come up less than ten ticks short over and over.