Nobody's a stranger to mahjong solitaire, the Chinese game of tile matching. According to legend, Confucius developed mahjong in 500 BC, naming it after the sparrow for the delicate symphony created by the individual tiles coming together to form a whole. Whether or not that's true, mahjong tends to be a quiet, contemplative sort of game, a mood elegantly set by the beautiful music and visual presentation of Mahjongg Dimensions Deluxe. 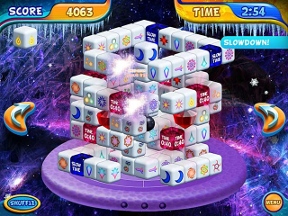 In this type of mahjong, you're presented with a pile of tiles decorated with dozens upon dozens of unique images. The goal is to remove tiles a pair at a time, selecting only pieces with open edges (sides that do not border other pieces). Which tiles you remove becomes important when your mahjong stack grows intricate, creating a subtle strategy that's important to the puzzle experience.

In Mahjongg Dimensions Deluxe, 3D tiles are used instead of the usual "flat" tiles deployed in most casual games. The cubes are stacked and removed just like in any mahjong game, only now you must rotate your point of view in order to see tiles facing away from the screen. Click the arrows on the left and right sides of the screen to move the stack. You can also use the [left] and [right] arrow keys or the [a] and [d] keys on your keyboard.

Mahjongg Dimensions Deluxe is played against the clock (though an untimed mode is available), and you score points based on how quickly you complete each set of four puzzles. Matching tiles quickly nets you a bonus multiplier. Special tiles appear after a few levels, such as time tiles, slowdown tiles, and gems that turn the entire pile into same-colored gems when matched. During this brief time, you can match any open gem with any other open gem, allowing you to make a serious dent in the puzzle! 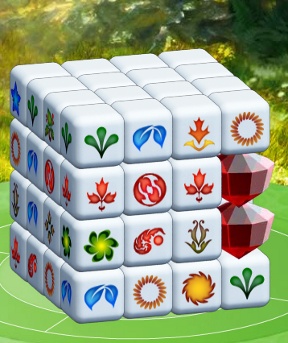 Analysis: Mahjongg Dimensions Deluxe stands out of the crowd for one huge reason: its presentation. The game begins with a bit of backstory outlining the Confucius legend along with a few other pieces of flavor text. Then you're treated to a peaceful meadow scene with trees and grass and cute fuzzy animals moving around. Later, new dimensions (scenes) open up, and each is almost as captivating as the last. The music was composed by actual musicians on actual instruments, and you'll feel like you're sitting in the audience of a small symphony.

Apart from it's deliciously calm presentation, one question about Mahjongg Dimensions Deluxe springs to mind: why 3D? Doesn't that add a pointless aspect of perspective hiding to an already challenging game? No, not really, at least, not after you settle down with the game. For the first few levels you'll wonder why you have to rotate the view just to see the other tiles. This rotation adds a subtle quality of realism to the game. It gives the playing field depth, drawing you in to the soothing backgrounds and filling your ears with the orchestral music more so than your standard mahjong layout. After a few minutes of play, board rotation becomes second nature, and the game takes on a wonderful zen-like quality of peace.

Mahjongg Dimensions Deluxe stumbles a bit near the beginning of the game with a too-verbose tutorial that practically tells you what the mouse cursor is and how you can move it. A few hyper-clicks later you'll be free of most of the help text, but it persists a few stages into the game, which is mildly annoying. Also, don't look for anything more than a game of 3D mahjong here. Mahjongg Dimensions Deluxe does what's on the cover and doesn't stray from that in the name of wacky mini-games.

A beautiful visual and aural setting, Mahjongg Dimensions Deluxe literally adds a new perspective to the mahjong genre and does a quietly pleasing job at it!

The Mahjong they say Confucious invented is a frenetic multiplayer game. This game is a variant of Mahjong Solitaire, that has absolutely nothing in common except re-using the tiles. Just wanted to clear that up.

Yep, that's right. I remember Mahjong from when I was just a child. My mother was part of a group who would get together and play a game similar to Gin Rummy with Mahjong tiles made of ivory.

We even reviewed an online version of Japanese Mahjong game back in 2008:
https://jayisgames.com/archives/2008/09/japanese_mahjong.php

For information about the solitaire version, for which Brodie Lockard originally developed the first computer version of the game, look here:
http://en.wikipedia.org/wiki/Mahjong_solitaire

I bought the game in 1986 (for Macintosh) when it was released by Activision under the name, Shanghai, and have been a fan of this form ever since.

Wasn't there a less refined version of this game on a link dump a few months back? Mahjongg Dark Dimensions. I got pretty addicted to that one. A zen-like quality of peace? Try keyboard punching and yelling. I love it.

This game is great! Any ideas on how to get past the 3rd level in the first dimension of the HARD LEVELS? I consider myself fast, but there is NO WAY!!

I've tried and tried, but I cannot get the third level in the first dimension of the HARD levels, either. There MUST be a way...

Sorry to hear no one has posted the secret to getting past the third level in the first dimension of the hard levels. Me either! It's a bummer to not be able to continue on.

I'm stuck on the last level in the fourth dimension of the hard set. It's so frustrating!!

The only tip I can offer on the third level of the first dimension is to rotate the puzzle once finding matches slows even a little.

I've been playing Mahjongg Dimensions for well over a year and had my learning curve. I beat all levels for the first time on Nov. 7, 2010. I couldn't believe it. But the learning curve had settled in and I've now won 25 times to date. Just under two months to go from one win to 25 wins. This game is great fun. I think it improves your eye sight too!