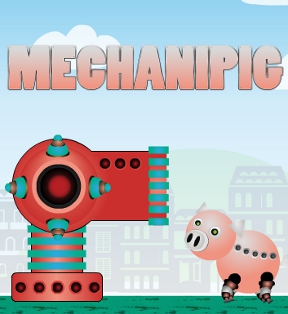 Mechanipig, star of IrregularGames' new launch game, hates the city life, and longs for a "Pig Paradise" said to exist just past the city skyline. Naturally, the best solution for this is not public transportation or a jaunty stroll, but to cram himself into a cannon and try to blast himself to porker heaven, causing massive property damage and an untold number of civilian casualties along the way. Who says games don't teach you responsibility? Just click to set the cannon's angle, and click again to fire when the power meter is where you want it. Flying particularly far and causing destruction earns you cash which you can then spend on upgrades to help your progress. That sound you just heard? Somewhere Tommy Vercetti and Nico Bellic are groaning with jealousy. Double-standards for pigs and gangsters are so unfair!

While Mechanipig is an adorable and appealingly silly concept, when compared to other games in the launch style it does feel like it needs an infusion of variety to ease the sting of repetition. If the backgrounds and environments in general had been more interesting to look at (and bash through) it really would have helped Mechanipig stand out from the pack a bit more. As it is, it's still a cute game, as well as a sobering reminder of what can happen if you leave your random cartoon cannons within easy reach of your dejected mechanical barnyard behemoths. So, you know. Stop doing that.

Cute little game. A bit simplistic. Wish it were longer.

How to wear a hat? I've gotten nearly every other achievement but that one.

Thanks for the help. Now if only I could just get the 0 distance flown achievement I'd have them all.

Cannon straight up, rotate pig to face left, booster to land before cannon (doesn't have to be exactly zero)

@Steve, yeah, I tried all that. I've also tried firing the cannon when the meter is at zero, no joy. I've landed in the negative numbers, still no joy. Sigh.