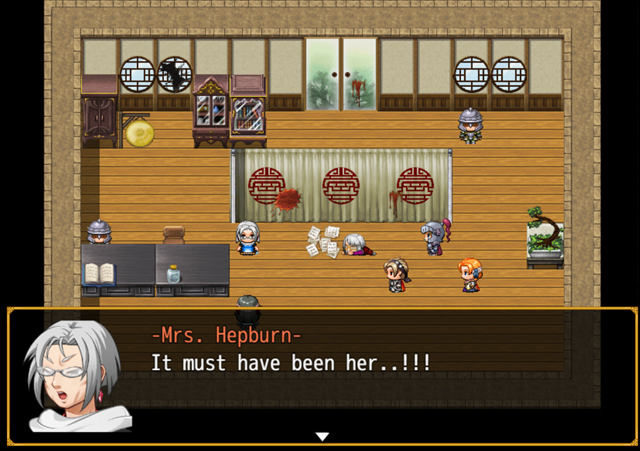 Sadly, you opened your eyes today and once again, you are still alive, but barely. At least, that is how sadistically minded, eternal pessimist detective Dregg Morriss might put it. For once, he only wanted to have a decent birthday. The game opens with a flash-forward of him and the Crown Prince of Scion, one of the kingdoms in the game, laying on the floor soaked in blood and left to die.

But hang on, we are getting ahead of ourselves. Around eight hours ahead, to be exact. In this seventh installment (that's right, seventh!) of Medieval Cop, after helping a friend with an "investigation" of who stole some cookies, duty soon calls you to a matter of far greater urgency: a sequence of murders happening every hour. To avoid causing mass panic amongst the ranks, the knowledge is kept strictly to a small group, and not even let out to all the soldiers. The detectives divide and conquer, visiting murder scenes to examine evidence for clues. Much like VasantJ's previous games, Adam and Eva is rife with plot twists and dark humor.

A signature mechanic to this game series is the Dimensional Debate (or in this game, a quick debate). When it's time for a bombshell allegation that makes everyone in the room (rightfully) question Dregg's sanity, Medieval Cop steps in and elevates psychological warfare to whole new level. You'll have to draw connections between specific pieces of evidence and reasoning to wear down your opponent physically and mentally, closing every loophole until they are forced to confess. Mistakes are permitted, but make too many and Dregg will tire out, making you restart the game from the last time you saved.

If you thought solving a murder mystery would round out our protagonist's birthday, well, you clearly don't know Dregg! After a suspicious letter instructing him to come alone to a warehouse by the docks, he is once again off on a mission. But it isn't all fun and games, and instead is where the real murkiness begins...

One thing to make note of before playing is that this game features several quick response events, where you must answer a question before time runs out, or it will be counted wrong regardless. It was new to this game and personally not my favorite, but still it made an excellent Point and Click, fairly lighthearted game overall. While this chapter fares well in regard to being self-contained, its half-dozen predecessors will give you plenty more laughs and surprises whether you are looking for more or just want to enjoy every dreg of the story.

Enjoy your adventure and be careful - for the citizens of Rightia, it is very much a matter of life and death!

I learned a lesson about not judging a book by its cover (or not judging a game by its name) with this series. When the first Medieval Cop came out, I assumed from the 'cop' that it was a shooter and passes. But I took a second look and now its one of my favorite game series ever. Dregg is my spirit animal.

Since I had never heard of the Medieval Cop games series, I googled it and started with the first game in the series, called "Death of a Lawyer." I figured it would be a quickie solve-the-escape type game that I didn't have to pay attention to while playing.

Turns out it's a true detective game, and you have to actually use the clues you discover and the evidence you find, to truly solve the murder mystery! Unlike those other detective type games, the trick is not in finding the clues, but that you yourself have to put them together and solve them like a real detective, with logic and detail!

I'm gonna try playing them all, and will comment again if some new insight comes up.

Here is a list of all the Medieval Cop series games for those who want to do them in order:

"Medieval Shorts" is a spin off of Medieval Cop with a new heroine, Amber Heart, "the newest Officer in Rightia Kingdom. Will she be able to keep up her positive attitude or will she be dragged down to hell like the rest of them"?

I'm also going to recommend playing the whole series in order, since Medieval Cop is a very plot-heavy series. This actually includes the Medieval Shorts series since the two are intertwined, but finding the correct order to play them in is a bit difficult:

From what I've heard, MS2 is between MC3 and MC4, and MS3 and MC7 "run together": they were released together and reference events from each other.

In fact, one of the quick-response sections in this game references the earlier games in the series, so you'd be quite lost if you were starting here.

(One warning for those going back to play the earlier games: the game mechanics in the earliest installments were more merciless, and so the advice to "save often" is no joke.)

I agree with kktkkr, playing the series from the start really makes everything make a little more sense. Plus, they are all good games, so why wouldnt you? :)