Before we begin the review proper, a quick word of warning: This game may induce the urge to grow an afro or purchase bell-bottomed pants. You have been warned.

Mevo and the Grooveriders is a funky music game that'll get your fingers a-snappin' and your toes a-tappin' (and your lips a-chappin' and your GPS a-mappin'?). You play as Mevo, a red alien that needs to reunite his band to save the universe from perpetual silence. (And the cats a-nappin'? Sorry, I'm done with that now.) 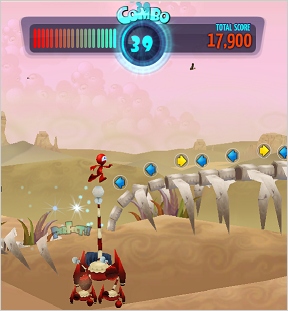 To get started, grab your mouse or your keyboard, although you're only going to need two buttons to play. As Mevo jogs along the course trying to find his band mates, create music by tapping the left and right buttons when you come upon the corresponding notes. (The keyboard default is the left and right [shift] keys, while the mouse uses the... well, left and right mouse button.) Blue left-pointing arrows mean you hit your chosen "left" button, and yellow right-pointing arrows mean you hit your chosen "right". It's as simple as that, just like a two-button version of Dance Dance Revolution.

As the music plays you create your groove by popping the note bubbles as you run down a long path. The feeling of jumping from platform to platform feels like you're racing Mario to the end of a level, except you can't hit the brakes and go back for those missed notes. In fact, missed notes chip away at your life, and some notes can cost you five units of life— a pretty steep penalty, considering you only have twenty to begin with. Eventually you have the ability to choose your own path, with the upper path often being much more difficult than the lower, but taking the upper path and mastering the groove laid down up there can net you higher combos, more points, and even some unlockable items.

Each of the fifteen levels gets a bit trickier, throwing in some new twists like double arrows (hit both keys) and combo chains that unlock bonus paths and bonus Funk (for shopping, more on that later). Completing levels with certain requirements also gets you Gruvs, which unlock future levels. As you trek through the jungle, sail through the ocean, and fly through outer space, you'll reunite your band and bring funky music back to the universe. And look oh so fine while doing it.

Analysis: If you haven't gotten down in a long time, Mevo's an excellent game to help you build your groove back up. Unfortunately, it's unlikely you'll hear any of the songs from Mevo and the Groovebenders during the Super 70's Hour on the radio station, since they all seem to have been made for this game. It's a shame though, they could have had some fun with Mevo running around to the tune of The Spinners' "The Rubberband Man" or Earth, Wind & Fire's "September". But that'd cost a whole bunch more for royalties and extra 'fro picks and such. 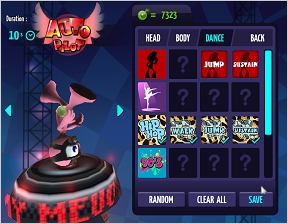 One thing that separates this game from most music-tapping games like DDR or Guitar Hero is that Mevo doesn't have any system to indicate meter within the flying notes. In other words, you don't see any lines that show you whether what you're playing is on the beat or some odd syncopation. If you can get the hang of the funky rhythms early, you'll be golden, otherwise you'll have some troubles as early as the first tutorial level.

If you can cope with syncopation, the songs and challenges are at a reasonable level, offering an attainable goal without being overly simplistic. If some of the combo or points challenges are giving you some trouble, you can use your collected Funk to buy outfits and dances for Mevo. Depending on what outfit you're wearing when you enter a level, you can get power-ups that can help you crack some of the tougher challenges. This addition of the shopping feature adds some replayability to the game, as some outfits can only be unlocked by finding them directly in the levels themselves.

Unfortunately, one of the stumbling blocks of this game is the play area itself. You're controlling a man that runs along a path and jumps from platform to platform while gathering notes, but when you make extra-high jumps, you often can't see what notes you have to press when you land until it's too late. Also, the environment you're traversing "reacts" to how you move through it (for example, some pillars crumble right before you get to them, and platforms might raise or lower as you move over them), but these sudden changes in the world might reveal notes that you didn't see before, and likely missed because they showed up too late. These reflex-testing notes keep you on your feet, but more in a frustrating way, especially when trying to rack up a large combo.

A few minor issues aside, it's all gooooooood. It's hard not to feel the funky love grooving your way through the levels and making the music that saves the world. If you're ready for a good jam session, give Mevo and his crew a call.

One huge issue I had is that apparently you have to play a level three times to get the diamond gruv. If you've earned it from the first playthrough, they should let you have it instead of forcing you to run through it another two times.

The world he runs through is interesting I suppose, but it is a rhythm game, and not including a better way of keeping track of the beats (at least maybe a little bar at the bottom or top of the screen?) makes it less of one.
I mean, it's possible (and very likely) for me to get mostly perfect notes on my first playthrough but have them all pressed slightly off-beat because I am playing by sight and not by ear, and that's not very pleasing to hear, you know?

I agree very much so with Reibear.
Also, I had gotten a power up of some sort of limited time automatic hits (from an outfit), yet nowhere did I see any way to activate it. The control set up sure didn't say how, at least.

And the music, at least in a couple of the early levels, sounds like I'm listening to those whale song CDs they have out there, and it's hard to get much of a rhythm on that. Once the groove starts going into the level it gets better, but it's still odd.

symar: You get taught about powerups later, but you can also run into your first "powerup activator" in a level that is underwater. It's not something you can manually turn on.

I love love love this game. Have completed all of the levels, and all of the badges except the first 3 badges? No idea how to get them...

The later levels are a lot more fun, and you have to choose which outfit is best for the task at hand. I think it's good that there are 3 challenges for each level because there are several different 'paths' you can take, depending if you get the bonuses and choose expert or not, and there are often outfits and dances placed along these more difficult paths.

I LOVE this game the end

I loved this game, but it became very infuriating at the last two stages... getting 400 combos even with power-up isn't my idea of fun, the same applies to getting 400 perfect notes, etc. And all of this while you're forced to act 'by reflexes' when scenery blocks your view of notes... You gotta be kidding. After (n+m)th run it makes you go insane.

I am going nuts with this game and I love it. This game sends you crazy but you enjoy it. I love the music, I give it a 10 out 10

This is one of the best games I've played in years! I LOVE the odd beats - everything fits within the music, but whether you're playing melody or harmony changes - because it keeps the game interesting. Always playing one or the other, like guitar hero, makes it too predictable. Similarly, I love having to replay levels again and again, as I learn to perfect the beats they are looking for... the good music, funny dances, and customization of the character make the replayability VERY high. I did find the second to last world/universe a little too hard, and the final world/universe way too easy, but the challenge did keep me on my toes. Would be nice to have a listing of all the badges so one could aim for them specifically.

Dazzled by nowadays video card killing games, I found mevo really funky and fanscinating. This is definitely a wakeup call for me that the point to make a successful game is to make it sychronized or blended into its player, which require inovative works and also really cool designs.
This fresh, relaxed and also exciting feeling is what I have long been trying to find in most of the other games. Wish for a continue version.

well... i can actually agree with all of you !! good bad ... infuriating.. it has great music and simple but really cute characters! his dance moves are on hit! any way ... just throwing my 2 cents in ... my carpel tunnel is killing me! lol! enjoy ya'll!!