Mission US: A Cheyenne Odyssey

Mission US: A Cheyenne Odyssey (Note: Site registration is required to play.) is the third in the series of educational point-and-click adventure titles focusing on American History created by Electric Funstuff under the auspices of New York PBS Station Channel 13. The year is 1866. You are Little Fox, a twelve-year old member of the Northern Cheyenne tribe. While still considered a youth by your family, with responsibilities to match, you will soon become a man, and a man must choose his destiny. The encroachment of United States military expeditions and the ever expanding network of railroads bringing more white "settlers" by the month means that dramatic changes are on the horizon, with battles that must be fought. But as the world changes, so does the Cheyenne. And so must you.

Controlled with the mouse, the emphasis of A Cheyenne Odyssey is less puzzle-solving than exploration, discovery, and conversation. The game's five chapters span from Little Fox's youth in 1866 (emphasizing the daily life of the Cheyenne), through major historical changes and events, leading up to Little Fox's participation in the Battle of the Greasy Grass in 1876. The game is fairly linear in the events that occur, as befitting its historical focus, but the choices you make will affect your values and skill statistics, opening up new options depending on what you choose to develop. 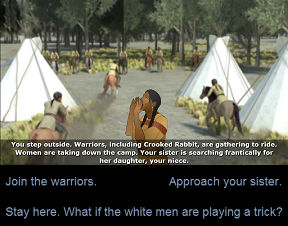 Like most minority groups, Native American are generally under-served by their depictions in video games. However, Mission US: A Cheyenne Odyssey tackles an important period of history head-on, well-aware of its difficulty, and it's success in its depiction is to be lauded. The history presented in A Cheyenne Odyssey is neither white-washed nor simplified. It is one thing to agree in the abstract that the Cheyenne were justified in retaliating against acts of violence against their people. It is quite another thing to choose whether that means shooting the conductor of a train you just sabotaged while he is trying to flee. While naturally the struggles of the Cheyenne are the perspective through which the game is played, much more so than any US soldier or settler, the actions presented are authentic to history and the most important moral choices are left to the player: when to adapt, and when to fight. That said, these considerations go hand in hand with the day-to-day life of food, family, and tradition, and the exploration and develop of Little Fox as a person living in interesting times is the highlight of the game.

Where A Cheyenne Odyssey stumbles is in aesthetics. The background art and occasional bits of animation end up being quite evocative, even stunning at times, but it must be admitted that there are a whole lot of bland, unblinking talking heads having conversations in this game, and the voice-acting does not always match the quality of the writing. However, all in all, A Cheyenne Odyssey keeps up the high stands of education and fun that the previous chapters of the Mission US series promised, and while targeted towards a young audience, history buffs of all ages will find it a must-play.

Play Mission US: A Cheyenne Odyssey(browser)

I'm loving this! Tho I keep restarting to get stats I wanted.. xD