Mission US: Flight to Freedom

Mission US: Flight to Freedom is the second in the series of educational point-and-click adventure titles focusing on American History (the first being Mission US: For Crown or Colony), created by Electric Funstuff under the auspices of New York PBS Station Channel 13. The year is 1848. The tenuous balance that had been struck concerning the issue of slavery wavers in the face of a nation expanding by conquest and treaty. Many in the south claim the "peculiar institution" is a matter of states' rights. However, the political rumblings concerning a newly proposed Fugitive Slave Act suggest that slaveholders would be happy to use the will of the federal government to force northern free states into compliance. Living in these tumultuous times is Lucy, a 14 year old slave of Kentucky's King Plantation. She gets up before the sun rises, and works until long past dark. Her father has been sold to another master, and, considering the poor harvest, there's rumors that her mother and brother will soon be as well. Lucy must balance her wishes for freedom with the risk of recapture, but an incident on the farm will force the issue sooner than she'd ever thought. What can a slave do? What should a slave do? What should Lucy do? 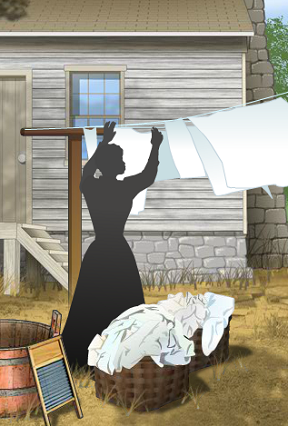 Controlled with the mouse, the emphasis of Flight to Freedom is less puzzle-solving than exploration, discovery, and conversation. Most of the five chapters start with Lucy receiving a task to complete, then moving from location to location choosing how to accomplish it. Though the game is fairly linear in its progression, your different decisions will earn you badges which will be used to open up different options as the game goes on. For instance, spending time talking to local abolitionists will give you information that could be useful in helping others escape slavery. In particular, clicking various yellow-underlined words and choosing educational actions will, (in addition to building your SAT vocabulary), will add to a literacy score, granting your character greater comprehension of written documents. Sections of the game also include strategic traveling sections, and gathering evidence and witnesses when someone you know is accused of a crime. The epilogue branches in a number of ways, depending on what badges you've earned, and not all the endings are happy ones. Note: Site registration is required to play.

Analysis: Educational computer games tend to avoid slavery as a topic. Not counting that hoax of a trailer that made the rounds of the internet in 2011, all that comes to mind is MECC's 1993 Apple ][ game, Freedom! (an Oregon Trail variant pulled from the market due to the stereotypical depiction of the language used by black characters) and the occasional theft of Harriet Tubman's walking stick by Ms. Sandiego. It's not hard to see why: it is not a topic that anyone wishes to see trivialized or depicted inaccurately or prejudicially. No wonder it's the subject of so much historical revision and re-revision. Happily, though, Flight to Freedom succeeds where others have failed, delivering an engaging and well-crafted peak into American history. 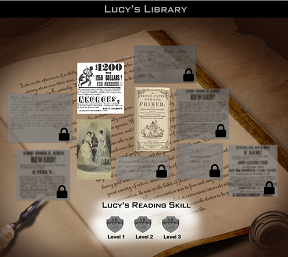 Wisely, Flight to Freedom focuses much of its attention on the philosophical struggles Lucy faces as a slave. As presented in the prologue, the main theme of the game is "What can a slave do?" This is no flippant question. In this game, your actions have consequences and there are few easy answers to the dilemmas you'll face. The questions range from the broadly moral (Is it worth the personal risk of disobedience and sabotage against an unjust system, when it might very well be your innocent loved ones who face the consequences?), to quandaries specific of the time period (Is it right to pay for an enslaved person's freedom, thus supporting a slaveowner?), to the coldly pragmatic (Will continuing your escape with an injured comrade too dangerously impeded your progress?). Of course, not every decision will have drastic effects: this is PBS, not Mass Effect. Still, it has a feeling of openness reminiscent of the Choice Of series. Perhaps not enough time is given over to the violence and prejudice of the period, but Flight to Freedom recognizes that the harshness of involuntary servitude and the paranoia of being a fugitive are strong enough lessons to deliver by themselves.

Stylistically, Flight to Freedom shows off its production values. The voice-acting and writing are top-notch, as is much of the setting art. Static character art is also well-done, even if the animation is a little wonky. Aesthetically, the game is at its best when it combines a silhouetted character with a lush background, making for a iconic, even evocative effect. Clearly Electric Funstuff spent its time improving what needed to be improved in the previous installment, and the result is a game that is as entertaining as it is informative. Here's hoping that Mission 3, set to be released in 2013 and rumored to cover the Great Sioux War, will maintain the series' standard of quality.

Overall, Flight to Freedom is an intelligent, thought-provoking work that should prove a treat to both its student audience, and anyone with a passing interest in history. Highly recommended!

There's a really good text adventure (not explicitly educational) that is about slavery, called LASH by Paul O'Brian. In case anyone's interested to see how other people have handled it.