Cute games seem to be the "in" thing to do for iOS releases. Why feature an ugly cockroach as a main character when you can sketch out an adorable dolphin with rainbow eyes instead? Most of our games this week are frosted in that sugary cuteness, so you might want abstain from riding on your unicorn for a few hours, just so you don't overdose on adorableness! 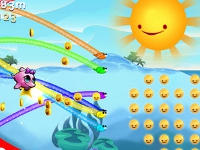 Sea Stars (universal) - Sharing features with games like Whale Trail and Tiny Wings is awesome enough, but build a game like that in the style of Jetpack Joyride, and you've got something seriously addictive on your hands. Tap the screen to descend, release to jump. Collect stars, avoid jellyfish, pick up power-ups... you get the drill. Only now, just about everything you do counts towards achievements, and with each run you do through the ocean, you gain coins and levels, allowing you to purchase upgrades from the store. In addition to all of that, each round you're given missions to complete, meaning you pretty much never run out of things to do! All of this and it was designed by Hothead Games, too, the creators of Kickin' Momma. A fantastic diversion with plenty of adorable/habit-forming gameplay elements to make you want to keep playing forever!

Horror Vacui 2 (universal) - Created by Shaun Inman, author of one of our most beloved retro-styled iOS games, The Last Rocket, Horror Vacui 2 is a one-trick strategy game where you and a friend (or the computer AI) take turns placing cards on a 5x5 grid. One player has water cards, while the other has earth cards, each of which may be hot, cold, or normal. Pieces transfer their temperature to neighboring tiles, so cold eliminates cold, normalizes hot, and cools normal, and the same goes for hot cards affecting neighboring tiles. The goal is to have the most normal pieces when the grid is filled up. It sounds obtuse in writing, but the game is surprisingly simple in practice, and a great diversion for you and a friend to enjoy! 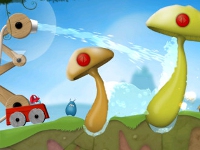 Sprinkle Junior (universal) - Remember Sprinkle from not too long ago? Well, the studio behind that water-blasting fire-fighting physics game decided to simplify things a bit, creating a streamlined version perfect for the little tykes. You're still putting out fires and still have a water cannon to use, but now you simply adjust the hose's height while dealing with a few simple environmental obstacles. Easy, big buttons on the interface, and levels that require little puzzling to complete. It's designed for kids, but everyone will have quite a bit of fun with it! 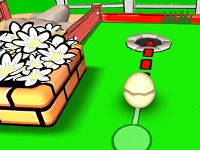 Egg Punch (universal) - How about some 3D mini-golf? With a bird in an egg instead of a ball? Sounds great! The rabbits have run off with your feathers, so you clothe your little bird self in a nearby eggshell. This makes you remarkably rollable, allowing you collect feathers and knock yourself into the rabbit's lairs across dozens of stages. This brightly-colored, cartoonish game features loads of unlockables that can alter the gameplay or just make your egg look a lot cooler. It's a great excuse to play mini-golf on your iOS device, and since it's filled with lovely 3D artwork, you get a nice visual treat to boot!

JohnB,
I recall that you used to specify whether there was a demo or "lite" version available for the mobile game being reviewed. Are you not doing this anymore, or does it just happen that lite versions have not been available for those games which you have been reviewing recently? Thanks.

I still do that! Not all games have lite versions, of course, and some of them are free, in which case I just link to the game at the beginning. But yes, if there are paid and free versions, I'll point out the free just like before.