Here's a trend we wouldn't mind seeing proliferate: games releasing alongside reference guides. Sure, you see the word "reference" and automatically think "boring" and sure, it's not a good idea for every game to do this, but in the case of Year Walk, a game based on Swedish folklore, a companion release that features more detailed mythological information is an amazing idea. Now we're almost more exciting about the companion than the game itself!

Forever Lost is Found - Found again, we should say! The massively good point-and-click puzzle game from Glitch Games has finally made its way from iOS-exclusive land to Android devices. Unfortunately only the standard definition version is out at the moment, but the team hopes to bring HD and Amazon AppStore releases to the world before long. Check out the review for more information as well as a full Forever Lost walkthrough. The game also took second place in our Best of 2012 voting in the Mobile Adventure category, so you know it's gotta be good! 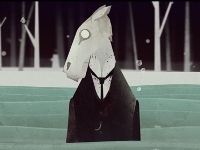 Year Walk coming soon, with companion! - Simogo is back with some more news concerning its upcoming (and extremely awesome) game. Year Walk, a 2D first person adventure game set in the cold woods of 19th century Sweden, will hit February 21, which is, like, so soon. Alongside that release will be the Year Walk Companion, a guide containing artwork and reference materials pertaining to the folklore in the game. In other words, instabuy on both counts!

Sword and Poker returns, again - It's one of our dear favorite mobile games of all time, but both Sword and Poker and its sequel have had a rough relationship with the iTunes App Store since their release several years ago. The titles have vanished several times without warning, only to return weeks or months later just as stealthily. Really, though, we don't care, as the series takes RPG gameplay to a new level with poker-inspired card battles that are filled with delicious strategy, tons of new and creative equipment, and card-based spells. It's an absolute must-try if the description sounded even slightly interesting, and besides, you never know when they'll disappear again!