While I'm a big fan of retro games, developers have yet to convince me that a touch screen is an adequate replacement for a physical controller. With a touch screen you get no tactile feedback, and I feel that ruins many iPhone games. This week we have several titles whose controls are better without d-pads and buttons. And believe me, that's a tough fact for me to admit! 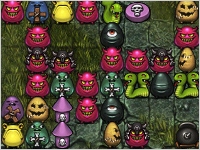 Diabolika - From Derek Yu (yeah, the Aquaria and TIGSource guy) comes an iPhone remake of one of his early games of the same name. Diabolika is a puzzle game that's all about chain reactions. Your goal is to destroy the demons that appear on the grid by setting monsters in key locations so their explosion ignites other monsters. Each piece has an area of affect, shown when you touch the icon, but the explosions only begin when you tap a placed monster. Arrange monsters so you take out the most demons with the fewest explosions and you're good to go. Fun fact: The original Diabolika and its sequel are two of my secret favorite puzzle games. SSHHH! 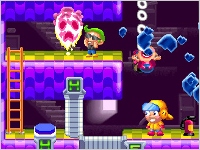 Go Go Rescue Squad - It's cute firemen saving helpless people from even cuter fires! AWWW! This side-scrolling puzzle game lets you control several rescue squad members who can climb ladders, leap chasms, and carry/throw a number of objects, all in the name of helping panicky family members to the exit. The touch screen controls fit this game well, making it one of the few sidescrollers that haven't made me cry and want my d-pad back.

Stackus - Physics-based stacking games are multiplying on the iTunes App Store, but Stackus is one of my favorites, if for nothing more than its presentation. Not only do you have to stack shapes on a platform, but you also have to disassemble shapes without knocking anything down. All of this takes place while a character mocking you in the background, which is... well, it's neat. Neat to be mocked! The pieces have way too much friction than they should have, and sometimes I felt the affect weight has on the structure isn't quite accurate, but that aside, it's an extraordinarily fun physics game, right up there with Topple. 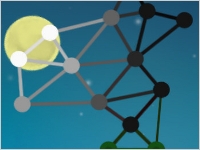 Moonlights - Build a remarkably World of Goo-like structure that reaches the night sky! Simply tap a space near two nodes to add a new node. Gravity is controlled by tilting your iPhone, and the standard "pinch" zoom controls are also available. Try to build a (relatively) stable structure that touches the moonlight for at least five seconds. Harder than you might think!

It has a lot of potential, but its difficulty curve is ridiculously steep. There were a lot of puzzles I couldn't even begin to solve, including the last "standard" puzzle in the second district. Aiming takes so long that it's practically impossible to earn anything better than a Bronze in any of the Panic Rooms, and in puzzles where you have to act quickly things can get especially tough.

It would be perfect if (A) the overall difficulty was a bit easier (a hint system perhaps?), and (B) the controls were improved a bit to make accurate throwing less frustrating.

Prices for the games: