True to its mobile gaming promises, this week's Mobile Monday is filled with pick up and play, put down and go away titles ideally suited for gaming on the go. The only exception is Catan, a game you honestly won't be able to put down and walk away from for a while. 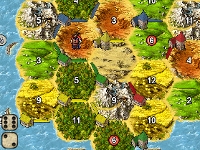 Catan - The First Island - If you haven't heard the name "Settlers of Catan", you probably just crawled out of your goo-filled storage tank connected to the power plant on the outskirts of the machine city. The award-winning strategy board game pits you against other players (or computer AI) as you fight for land and resources, but really, it's far more intricate than that. An excellent translation of the board game onto iPhone, and a great introduction to the legendary game for any newbies out there. 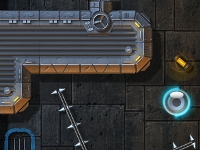 Dark Nebula - Episode One - Tilt control taken to the extreme, Dark Nebula is an extremely well-made space-themed arcade game of avoidance similar to the classic Labyrinth maze game. Move the shiny little disc by tilting your iPhone, working your way across twisted landscapes trying to collect capsules and avoid numerous obstacles. The controls are spot-on excellent (though I wish the game had a calibration feature... we're not always sitting straight up when playing iPhone games) and the game has the wonderful ability to pull you in. 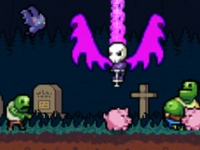 Skullpogo - Have pogo stick and skull face, will get game. Originally a free downloadable game, Skullpogo makes its way to the iTunes App Store with facelifts and improvements all over the place. Build combos by jumping on pigs, zombies, bats and other critters with your pogo stick. Power-ups appear from time to time to spice things up, and if you jump off the top of the screen, you get a nice mega-stomp-type move. Three different control schemes let you choose the method most comfortable to you. Definitely one of those "can't put it down until I do just one more round" games! 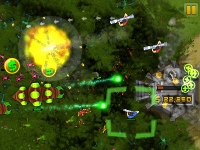 Boombrigade - If tower defense games gave you more control over combat, they would be like Boombrigade. Spawn, upgrade and tweak various units on the field, each of which has one job: destroy the invading creeps. Tap and drag to set walking paths for your soldiers, making sure they loop back to keep your fort nice and cozy. Surprisingly challenging, if a little awkward to learn to play at first.

Just an FYI - the devs of Catan are promising expansions in the future, whether through a free update or paid expansion (which Im guessing is more likely), it does extend the life of an already quite replayable game!

I've been playing the iPhone Catan game for the past few days and it's really well done. I always win, though, so I guess the AI could stand to be better.

But when you don't have a group of people at the ready to play, this one really satisfies.

Hopefully they will add an online multiplayer mode.

Dark Nebula is a really fun game. Nice graphics and a REALLY good tiltcontrol. I read the other day that an update is on the way that will allow you to calibrate the controls. And some sort of leaderboard function as well.

I just bought Dark Nebula - IT ROCKS!! I haven't played any game with tilt controls this tight. I wish it had calibration though, but I guess the update will fix that.

Lost my iTouch but I can't wait to try Catan, I've loved it and all the board games relating to it.

I had never heard of Settlers of Catan. Incidentally, goo is very hard to get off.

Skullpogo is tons of fun though.