One secret fact about iPhone games is that they can make you do weird things. Tilting the device to steer a car, for example, seems innocent enough, but when you're operating a flying taxi cab or flinging enemies up into the virtual sky, it's easy to get carried away. But you know what? Who cares if you look like a weirdo. You're having fun, and that guy making fun of you is not. 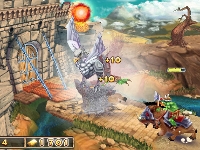 Castle Frenzy - An arcade defense game along the lines of Defend Your Castle. Wave after wave of goblins, trolls, warlocks, boars and other baddies come streaming in from the right. Using your finger, flick them into the air or smash them against the ground to send each foe packing. Upgrades include a pet hydra that eats enemies, a griffin statue that can squash entire groups of baddies, and several spells that use the touch interface quite well. A simple but extraordinarily well-made defense game you'll have a hard time putting down. 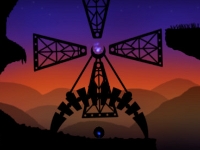 Trundle - A platform puzzle game that bears a striking resemblance to an upcoming project by Nifflas. Move through each screen by tilting the iPhone to roll the little character back and forth. Move objects by bumping into them, and arrange things by building speed and crashing into them to get them in the right place. Some of the puzzles are trickier than they should be and require more luck than skill, but on the whole, the game is a superb blend of platforming and puzzle genres. 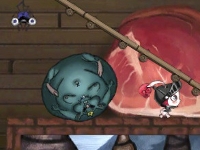 Plushed - A moderately open-ended platform game that's both charming and gorgeous. You play a rabbit wandering through a fairy tale land collecting golden ladybugs and shaking slices of pizza out of trees. What? I said it was a fairy tale land... To help the various creatures of the game, you'll have to use items and food to coax other creatures (both big and small) into doing your bidding. Most of your time is spent exploring, as there are only a few dangerous obstacles in this world. But boss battles are something to behold, as they require actual thought and skill instead of luck or blind reflexes. Don't let the first few levels of this game fool you, it's a brilliant iPhone platformer! 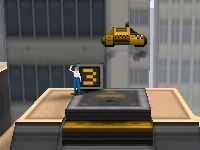 Cabby - Gamers raised on the classics such as Space Taxi will immediately recognize the setup in this game. Cabby puts you in control of a flying taxi cab with the task of picking up passengers and dropping them off at various numbered destinations. It's surprisingly easy to crash your car, as one nudge too many and the thing will blow into pieces. Take things slow and easy, save the crazy antics for another time. If you can resist, that is. The free Cabby Lite is also available.

Not sure how I feel about Trundle. I guess "bears a striking resemblance to" is the new euphemism for "plagiarizes"?

Stylistically, Nifflas isn't the first person to use silhouettes, so I don't think plagiary is a fair term to use.

I don't think "silhouettes" really does justice to the resemblence, Jay. After watching the videos of Night Sky and playing through Trundle, I don't see a single element of the latter that wasn't directly ported from the former.

Fair enough. I'll reserve judgment until I have played both.

I hate to ask this late in the game but are these only available to iPhones/via iTunes? Are any of these going to be available on other devices like Blackberries?