One day our fossil fuel economy will come to an end, and it may take many of the trappings of modern life with it. That stuffy old (though world renowned) geezer Dr. Von Leakentube, head of Leakentube Elixir, Inc, is hard at work trying to prevent the coming energy crisis by searching for the holy grail of fuel sources, cold fusion. Unlocking the secrets of cold fusion is tricky and, naturally, he needs your help. The answer lies somewhere... within... these... molecules... NOW THE GREAT WORK BEGINS! 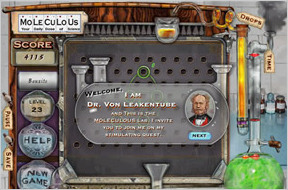 MoLeCuLoUs, which happens to be up for an IGF award this year, plays like a modular pachinko machine. The game takes place on a grid of slots with which you add or remove pegs using the mouse. Each peg you insert causes the beaker hovering at the top of the screen to release a drop, which falls and bounces off any pegs it its path. As lab assistant, your job is to ensure the drop lands in the test tube at the bottom of the screen. A successful capture moves the beaker to a new position.

Each level is based on a chemical compound and has a group of element slots, circled in white. To move on you must clear each element slot by capturing a drop that has bounced off a peg inserted into it. There's a limited number of drops to work with, as well as a timer; if you run out of either, it's game over. Other threats include poison barriers, slot-removing bombs and spinning "wayward fans" (huh?) that appear sporadically on the playing field. There are several additional game modes including "head 2 head challenge" (two players take turns to see who can clear the stage with the fewest pegs in the least time) and "speed round" (similar to normal mode, except the beaker and test tube are constantly moving, and without the element pegs.) 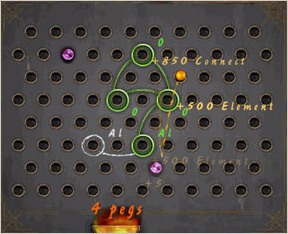 It is difficult to predict the path that a bouncing drop will take. As if to compensate for this, the scoring system rewards you for taking the least direct route to the test tube; 100 bonus points are given for each peg hit along the way. I had the most success, and the most fun, frantically placing and removing pegs all over the board in order to rearrange the path for a single drop in motion.

MoLeCuLoUs' science theme is almost completely irrelevant to the game play. However, if you're paying attention (and are already familiar with the periodic table of elements) you might recognize that Hydrogen and Oxygen are the element pegs in the water level, or Carbon and Nitrogen in the cyanide level. Educational? Not really, but as an aesthetic it works. The sound design is well done, with lots of atmospheric glass clinking and xylophone-like tones when the ball strikes a peg.

Gametrust has put together a solid and fairly unique title. Unfortunately the limitations of the Shockwave platform hurt the online free trial version of the game slightly, as everything feels a bit chunky and moves more slowly than one would like. The download version of the game is for the PC platform only. The free trial available at the gametrust site contains only 8 levels but it's a good diversion and, hey - the world is hurting. Cold fusion isn't about to discover itself. Click.

off topic but how can one submit reviews to da master jays' site?

Please correspond with me directly using the email address in the sidebar if you wish to contribute a review to the site. Cheers!

uh, its in shockwave, not flash. no fun for us linux people

Thanks, plerk, I've made the correction to the review.

Interesting game, but also a little weird. I got to the end of the demo, and chose "play again", and got to play the more frantic "speed round" version of the game. This version goes on forever(I stopped at level 46 and 739890...I believe that there are only 44 elements, since these levels still have the name of the elements, and it wrapped at lv 45).

The man looks suspiciously like a mix between Van Buren and Vanderbilt.