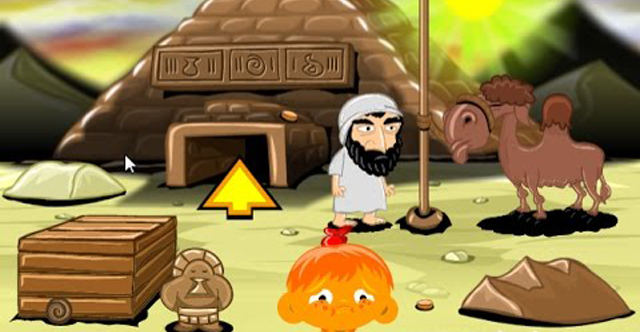 What kind of a predicament have the monkeys gotten themselves into this time? You find your monkey friend crying outside an ancient tomb, having lost its friends. A camel is tied up to a pole, but in order to free it, you will need to give the greedy man holding it hostage twenty coins. Finding all this wealth is going to require quite the effort and spelunking expedition! Enter the pyramid, if you dare, solving a series of increasingly intricate puzzles and uncovering mini monkeys in the oddest possible places.

As usual in this latest installment of Pencilkids' popular series, the game is controlled entirely by your mouse. As new areas unlock, click the big yellow arrows to navigate through the scenes. Later puzzles may require some backtracking for reference, but everything is cleanly presented if you know where to look. Give this latest game a try and help the monkey go happy!

can't wait for the walkthrough here. and KK, if you are reading this, I think I speak for all jayisgames members when I say you are doing a great job on doing this for us and you are an important member here. Just saying. Keep up the good work :)

I don't know enough about Egyptian mythology to tell my Sets from my Sobeks, so I'm probably going to misinterpret some symbols and misuse some terminology here. Hopefully it's still clear what's what.

It's time to get rich with ancient treasures, then give it all away to free a camel.

There are two braziers in front, and two empty pedestals next to them.

There's a hole in the door, and a shell glyph beneath it. To open the door,

place the idols on the pedestals and click them to adjust the heights until the left one has 2 lines and the right one has 1. (Left one twice, right one thrice.)

Then place the stone in the door and push it.

Go through the open door.

There's a covered well here. Above it, there's a hole with a pot glyph below.
Take the two coins from the left archway and the right side of the well.
Move right.

There's a statue here with a dog's head(?), which I'm going to call a wolf. There's a hole in his forehead.
Take:

Note the symbols on the wall, which I'm going to refer to as Man and Triangles. From top down: Triangles Man Man Triangles.

I'm going to call this statue a crocodile. There's also a hole in his forehead.
Take:

Note the symbols on wall. From top down: Man Triangles Triangles Man

Go back to the first screen.

Open the box outside the pyramid with the crowbar, and take the stone with the pot glyph.

Go back into the pyramid, and adjust the pedestal heights to 3 and 2 (click each pillar thrice).

Go through the door into the next room. Place the stone in the hole above the well, then push the stone, opening the well.

Use the rope on the stick above the well, then go down.

There's a sarcophagus-shaped door in front with an eye-shaped hole, and two vertical rows of buttons to its left and right.
Take:

On the left and right walls, engravings indicate that Triangles is X, and Man is +.

Go back up and then left.

Adjust the buttons along the bottom to display glyphs according to the clue on the right of the doorway.

Use the button from your inventory on the crocodile, who raises his head. Take the eye from underneath.

Go back right and down.

Place the eye in the door and push it. The door opens. Move forward.

There are doors to the left and right and a sarcophagus (not a door) in front, and a mound on the floor, each of these with a hole in it.
Take:

Use the bug on the mummy to draw him away. Take the button marked with pointy ears from the corner.

Go back, then up the well, then right.

Adjust the buttons along the bottom to display glyphs according to the clue on the left of the doorway.

Use the button from your inventory on the wolf, who raises his head. Take the key from underneath.

Make your way back (left, down, forward) to the previous room (Crypt Center), and use the key on the right wall.

Take the lever in lower left, and move the rock on the floor to get a mini monkey.

Use the crowbar on the loose brick in the right wall to remove it. Take the key and lever.

Move left and use the key on the left wall.

Take the lever on the floor and use the crowbar on the loose brick in the left wall to remove it.
Take the coin, lever, stone marked with a fire glyph and the mini monkey.

Go back (right, back, up, back) to the room with the pedestals (Pyramid Hall).

Set the pedestals to heights 1 and 3 (click the left one twice, right one thrice).

Go back (forward, down, forward) to Crypt Center, place the stone in the wall straight ahead and push it. Take the staff.

In Crypt Left, place two levers on the wall and set their horizontal positions according to the "binary" clue.

Do the same for Crypt Right.

Go back to Crypt Center, use the staff on the hole in the center of the floor and push it down. Creepy stuff happens, and then it's replaced by a pillar with 3 coins, like nothing happened.

You should now have 20 coins:

Give the man 20 coins, and he leaves. Take the last mini monkey.

If you're playing the MonkeyHappy (HTML5) version, your clue for this stage (62) is (Circle with two horizontal lines) = 1.

Thanks KK and you're welcome on the compliment :)

Such a cute game. Loved it!