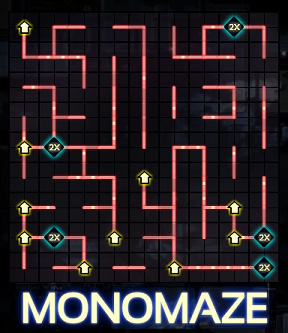 It goes by many names: Dots, Dots and Boxes, Paddocks, Square-It, Dot-Boxing... Whatever you call it, it's the grid-based game of strategy that's been played the world over since its rules were first published in 1889. However, unlike its pencil-and-paper cousins tic-tac-toe or hangman, Dots has never been all that satisfying to play against a computer. It suffers from the same difficulties as Go, in that the plethora of move options makes it difficult for a computer to sift through and find a winning strategy. Clearly, if the game is to effectively make the leap from restaurant place-mat to computer screen, some remix of the core rules is necessary. Monomaze, the new release from Diffusion Games, is just such a remix, and a successful one at that. It combines the core strategic elements of Dots with a healthy dose of arcade-puzzling, and coats it in a futuristic aesthetic. Never has clever line placement been so intense, or, for that matter, so entertaining.

Monomaze is played entirely with the mouse. On the Dots-styled grid, you must click the screen to place lines to form complete loops in exchange for points. Once a loop is formed, it and all the power-ups on it disappear and are replaced with a random selection of lines, spaces and new power-ups. Loops with larger perimeters grant more points and a greater probability at power-ups. You start with thirty line segments to place. Run out and the game is over. Likewise, bombs will appear on the grid. These are destroyed by looping them, but if not done so in ten turns, they will explode and end the game. Power-ups include arrows which, when captured, grant you an extra turn, Diamond Multipliers that increase your loop score, and lightning bolts which clear the grid of all bombs. In addition to the standard game, there is a Blitz Mode which adds a sixty second time limit to the challenge. I think (puts on sunglasses) dots all you should need to know. YEEEEEEEEAH!!! 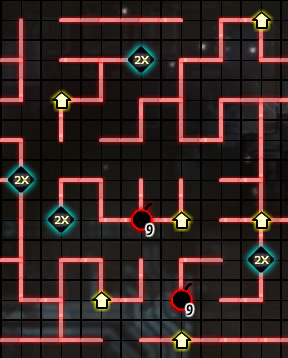 Analysis: Monomaze has both the surface simplicity and hidden depths that are the hallmark of classic arcade puzzle games. Indeed, if it wasn't for the high-rez backgrounds and occasionally-too-thumping soundtrack, the game wouldn't be out of place in a cabinet at the local pizza parlor, nestled between Tetris and Qix, right behind the claw machine. However, there tends to be very little middle-ground in opinion for games like this, based so strongly around a singular mechanic: for any individual player, it's either addiction or boredom with little room in between.

Me? In this case, it's addiction. I love Dots, I love grids games, I love pattern-recognition, and I love games that reward both careful planning and quick improvisation. I'm happy to see that the developers were confident enough in their gameplay to avoid tacking an unnecessary plot onto the action. Trying to set up an extra-long circuit, while formulating enough short ones to prevent the entire board from exploding, has appeal enough all its own.

My biggest concern with Monomaze is that it misses out on clear opportunities for additional play-modes. This is a game that cries for multi-player. Considering that Monomaze's mechanics are taken from a two-player game, it feels quite the glaring omission. (Though, I suppose that the addition would have forced a rename to "Polymaze"... not quite the same ring to it.) Also, some form of puzzle mode, based around the best placement of line segments would likewise seem a natural inclusion. Of course, if the main complaint about a game is that you want more ways to play it, clearly it's doing something right.

Monomaze's repetition, whiningly-futuristic music and no-frills presentation might initially turn some away, and indeed you'll probably know if you love or hate it by the end of your first play-through. However, I'm sure more than a few will start playing, and then, suddenly, it's three hours later. If you're looking for a high-quality game to pass the time with, to paraphrase Lyle Lanley, it's a gamer's perfect choice. Throw up your hands and raise your voice! Monomaze!... Monomaze!... MONOMAZE!

The author considers the cycle matroid on the grid graphs. DiffusionGames presents a new "interactive" proof of Unique Circuit Theorem in this special case (the theorem states that if adding a single element to an independent set creates a circuit, it creates a unique circuit).

However, the author fails to review past literature on generating random spanning trees (or forests). This problems is exhibited by circuits appearing in the initial configuration. Instead of the usual negative correlation on the probability distribution of the edges, DiffusionGames seems to be using a uniform distribution.

Furthermore, the author seems to be considering the grid graph embedded into the torus (rather than the plane). Notably, non-contractible circuits count towards the score. However, players are not allowed to add edges between the first and last vertex of a row or column.

Finally, the power-up in Figure 1 is mislabeled "2x". Indeed, this bonus is additive one rather than multiplicative. "+1x" would be more accurate. We do advise the author to preserve the current scoring scheme to avoid final scores increasing on an exponential scale.

Suggestion: This submission should be published after revisions are made to address issues stated above.

Thanks for the nice review! I have pondered a multiplayer mode, maybe more likely a "two persons at computer" mode, although it could be interesting to be playing in realtime on the same board. Will definitely ponder it.

Also, above (below?) comment = LOL. I did try a version where it would eliminate all edges in the middle of a "circuit", but it was considerably less fun, since it re-randomized huge parts of the board quite often. I also do realize that it will occasionally make new loops when it puts new random edges in, but I left that in because it gave a bit of Bejeweled-style "combo" feel.

The first comment is maybe the greatest thing ever published here. Or at least refereed.

Wow, that first comment is brilliant. Takes me back to the grad school days..