OK, show of hands, here: when was the last time you paid a visit to a fantasy kingdom that wasn't horribly overrun with vicious monsters? Is this something you have to take into consideration when filing for fantasy home insurance? "Protects against damage caused by fire, flooding, and persistent raids by terrifying demonspawn." Thank goodness Monster Play has called in the Monster Squad to help keep the population of horriffic abominations down. Join this fearless team of Redwall-esque beastmen as they journey across the kingdom, RPG-style, slaying enemies, rescuing allies, plundering dungeons, and loading up on lots of shiny loot. If you want to make the world a safe place once again, you'll need strength, strategy, and plenty of turn-based know-how. 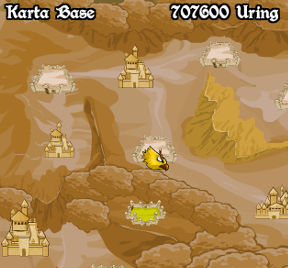 RPGs are a genre that often favors story over gameplay, but Monster Squad cuts to the quick. This is a game all about fighting off waves of monsters, from the minor-est minions to the most brutal bosses. The world map itself is little more than a series of icons on a map, which you click to move between. Dungeons are a simple manner of selecting "left" or "right" from a menu, and occasionally deciding whether or not you want to risk opening a treasure chest. The real meat here lies in the combat, and in building your fighters. You start the game with a mere two characters (whom you can even name yourself, in classic RPG fashion), but there are six in all to play with, each one with their own strengths, weaknesses, default abilities, and exclusive equipment. Although they each have their specialties, the game provides a wide variety of options so you can tweak them to your liking, letting you find a playstyle that works for you. Will you take advantage of the eagle knight's high Magic, and make him into a fearsome wizard with an elemental axe? Or will you utilize his special, stat-raising ability, and build him as a berserker? There are so many options, in fact, it's a little overwhelming. The game does provide a tutorial, but it only touches on the base mechanics of how to play the game, and barely even scratches the surface of the vast number of menus you'll need to navigate. Even veteran RPG fans might get a little lost in them at first! Once you do learn them, dozens of possibilities open up for you on how to craft your characters and fight your way through the world.

You'll need to experiment, too, because this game is one tough cookie. Once you step into a "combat" area (represented on the map by a field), there's no leaving to heal or restock on items until you've beaten every monster. If you lose a fight, you're forced to reload from your last save file, whenever that may have been. Some monsters come packing nasty surprises that ensure you'll die at least once against them. It's punishing in a way that may put some players off, though as with any high-difficulty game, others will embrace the challenge. A little under halfway through, you get the option to make the game even harder, and while it does warn you that "the world will be forever changed," know that you won't be able to undo it should your choose to activate it. Those who don't mind the difficulty will still notice there are a few dents in the game's presentation, such as the bright yellow backgrounds and ye olde font used for the menus. There's also a slight graphical glitch on the save menu that can make it seem as if you have the wrong amount of HP. (The actual file itself is unaffected.) But the amount of content offered up makes up for these minor issues. While those looking for a deep narrative or vast sense of exploration will be disappointed, not to say the world doesn't hide a few secrets here and there, anyone hunting for a turn-based fix will find a lot to like here. Monster Squad provides a surprising depth of content for a free RPG, and its length makes it a great game to play leisurely over the course of a day or two. So what are you waiting for? The kingdom needs saving, brave warriors!