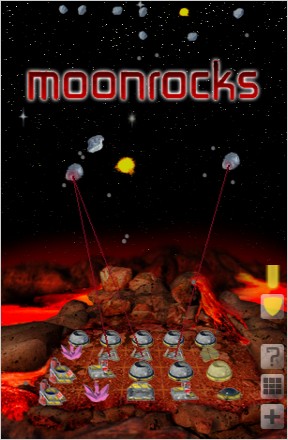 Released last week by indie developer allenp, Moon Rocks is an impressive little shooter-defense game that's pretty challenging and fun. Loosely inspired by the classic arcade game Missile Command, you're tasked with defending your little chunk of the planet's surface from an onslaught of asteroids, ice comets, enemy ships and plenty of other things that threaten to turn your base into Swiss cheese. Unlike the old 2-D style of Missile Command and many of its clones, Moon Rocks emulates a three-dimensional grid space for building your base. It doesn't really affect gameplay, since the falling asteroids are still two-dimensional (as far as I could tell), but it's a better way to optimize the UI real estate and manage your base. Plus, it just looks cooler.

If you don't expect too much in the way of back-story, you won't be disappointed—there really isn't one. In the campaign mode, you command a sort of mining colony or fleet, jumping from planet to planet to gather resources, while the enemy AI players try to do the same. The more resources you gather, the more towers and technology you'll be able to unlock. This is all managed through the map screen, which you'll see between each level (also giving you the choice of which planet to attack next, while your opponents do the same). Besides unlocking brand-new towers, you can spend points to unlock higher levels of certain towers, like your cannons and lasers. You can also spend points on technology to increase things like tower armor, tower cost and lots of other different upgrades. In order to buy most of your towers in-game though, you've got to purchase one or two Factories and place them next to the crystal-looking objects on your grid, which represent mines. Factories will steadily increase your resources, and you can upgrade them into Refineries to bring in the money even faster. 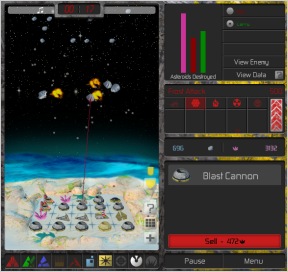 You get a fairly wide array of towers, most of which work in synergy with one another to provide the right firepower for the right situation, and the defense you'll need to fend off the asteroids and the special attacks your opponents will send your way. Your basic weapon is the Cannon, which can be upgraded three ways: speed, power and "frag," which makes the projectile explode on impact, bursting into more projectiles. The Laser can only be upgraded in power, but it's useful for focusing in on single targets like big asteroids. You've also got an Anti-Aircraft gun, a Solar Shield to protect your base, an Anti-Gravity tower to slow incoming asteroids, and a few other useful towers like the Air Base, which is used to send fighters over and attack one of your opponents. A similar tower, the Gravity Well, is also used to attack an opponent's base by hurling special asteroids at it, like the Ice attack to slow its towers, or a Radioactive attack to break apart asteroids into even more pieces.

The premise might sound a little confusing at first, which is why it's a good idea to read all the tutorial sections and click on the "?" icon in each screen, which labels the function of each part of the UI. Essentially, your main objective is to defend your base and destroy as many incoming asteroids as you can. That's how you ultimately win each level; by destroying more asteroids than your opponents. But you can also attack an opponent's base in the hopes of destroying a few of their own towers, slowing them down while they have to rebuild. They can do the same to you (and they will), which is why it's important to invest in an Anti-Air gun or two, and a Solar Shield. All of your opponents' data is in the upper-right corner of the UI. You can see a real-time graph of how many asteroids everyone is destroying, as well as selecting an individual opponent to view their actual base, or direct attacks toward them if they are gaining the advantage.

Analysis: There's no denying Moon Rocks has a steeper-than-usual learning curve. Without reading the Help section and playing the tutorials, you'll be flying blind when it comes to the more intricate aspects of the game—specifically, the mechanics between you and your opponents. But once you get the hang of it, the game doesn't feel detached or punishing at all (although it's still quite a challenge beyond the Easy setting). It's an interesting combination of arcade and casual Flash game elements, like a cross between Missile Command and a tower defense game.

There's a nice Quick Play option that throws out the enemy opponents and unlocks all your towers, allowing you to play as long as you can survive without any distractions. Unfortunately, there's no way to save your progress, even in Campaign mode. Apparently it's something the developer had to sacrifice to release the game on time. On the other hand, you can complete each map in an hour or two. Still, that's something not many casual players will appreciate. But overall, the gameplay is solid, the graphics and sound are stylized and respectable, and it's a pretty fun and unique game if you enjoy strategy-shooters.

Eh, I thought it was a neat idea at first, but quickly became bored. Once you realize that the AI will always get more asteroids than you to shoot down, you just need to focus on offense and just overwhelm them with attacks.

Hmm... this needs much better documentation, but it seems interesting. The tutorials are oddly lacking in, well, explanation, but the in-game tooltips cover things well enough.

The real problem is, while it's easy enough to figure out the basics of the tower defense-like gameplay, the real goal isn't survival, it's successfully defending against more more stuff than your opponents. And there's really no indication of how you can more effectively do that.

I've noticed that some minor defenses, major resource production, and a bunch of gravity wells lets you completely wipe out an opponent's base, but even when you can do it, they score so many points off their desperate attempt for survival that they win by a huge margin. Games just don't last long enough for the short term boost to be offset by the longterm stop.

Alternatively, you can opt to go with no offense at all, hoping the AI will try and smack you down, but as it's always a 3-way fight, and the AI seems to react to the biggest threat with their own attacks, without jumping off to a an early lead by blind luck, the 2 AIs will attack each other, which actually helps them, and you snowball to a distant 3rd.

I'm really wondering if I'm missing out on some game mechanic that calls down more rocks to farm for points, or if this is a case of not testing properly before release.

It won't let me get some of the upgrades, and says they are "only available on arcadebomb.com".

I had a standard load-out of four fully upgraded refineries so I had silly amounts of resources, five cannons double upgraded for speed, four lasers maxed, and two gravity wells and two airdomes. Once everything is all upgraded, spam attacks at all enemies until you win the level, which takes too long because flash seems to slow down on my machine.

I keep trying to play, but I always quit in disgust for the exact reasons mentioned above.

More rocks come down when you clear ones already there, so aim for speed.

On one level I did no offense just for fun and I finished last, but the margin was 591-590-579. Once my upgrades were fine I routinely was killing more asteroids than both CPU players combined.

There is an obvious tactic to easily cripple the enemy AI. Boring...
Here is a snapshot of my final map of the first campaign -- it explains the tactic. Needless to say I had full upgrades and the AI not so much :)
http://img35.imageshack.us/img35/2055/bild1t.png

It says you can play 2 extra maps if you go to arcadebomb.com but even there they arent unlocked

They never explained how to *hold* a planet you've captured...Is it random? Do you have to beat the enemy by a certain margin on whatever planet you're attacking? Destroy their base fully?

The tactic Chris is referring to is to keep the AI from gaining any planets. (I think)

Only the top two finishers get to take a planet. Finish first and alternately attack each AI so that the other places 2nd. They will trade the first planet back and forth until you win.

Actually quite liked this game, annoyed though that the maps and some of the towers were still locked even though it was hosted on arcadebomb

Anybody else have problems running this thing?

I get some logos, splash screens, etc., and then an error from Adobe Flash Player 10:

I'm playing the first map, and I can't seem to come out on top even on the first level. What exactly am I supposed to do?

I, like many others, was unable to determine how to destroy more asteroids than my opponents, it seems like they could handle everything I threw at them. Also, the review indicates that quick play mode allows you to play "as long as you can," but it cuts you off after a little bit, at least at easy difficulty.

The key appears to be economy. Grab the factory upgrades, and upgrade early. Cannons are good for most threats - a mix of speed and frag seems to work well, but you'll want a laser as well. Might as well pick up an anti-air tower while you're at it.

I've chosen to ignore the other defenses entirely, and they've proven superfluous. Offensively, multiple gravity wells are wonderful, with an airbase or two in there as well. After a combat or two, resource issues should cease entirely, as you can't burn through them as fast as they're produced - I found myself with an excess of >20000 at the end of combat.

Game is trivial once you've got a hang of the mechanics.