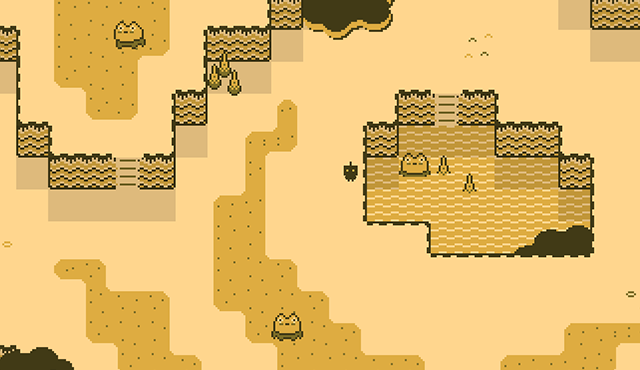 Wake up... Wake up! Happy Birthday Moop! A black little guy opens his eyes and sees a white little blob. It's Ink! One of your friends and it's your birthday. You better head on out to see what kind of surprise they have for you. And thus the story of Moop starts, on a sunny and careless day. But shortly after you get send on a quest to collect some Marshrooms to add to your birthday soup, things suddenly take a turn for the worse and big chunks are falling from the sky.

Moop is a short puzzle game that has been made in one month for the IGMC 2017 game dev contest, and is clearly a lot more than you would think beforehand. This game really surprised me as it is a lot longer than I first anticipated and the personalities the creator gave to the characters is much more than you would expect right from the start. The style of the game is, in my honest opinion, amazing. It uses a sepia style palette which brings out the pixelart perfectly, and the plot is air-tight.

You control Moop with the arrow keys, open the menu with A and use the Z key as the action button. Eventually you will find items that you need to pick up to progress further in the game, and there is no way you can really get stuck. The game area isn't that big to get lost in, but big enough to forget about certain area's. Once the story unfolds and you learn more about the plot, you'll fall in love with the game as I did. Now it's time for you to wake him up. Wake up Moop, wake up...

Windows:
Get the Full version

this is SO LOVELY. I want to live in this game. The characters are so well written. The puzzles are quite basic fetch puzzles, which is a shame, but the world is so lovely it doesn't really matter.

I laughed so hard at the