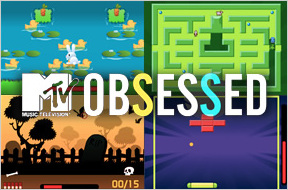 Take a trip through the history of games with a brand new Flash game offering from the MTV Obsessed website.

MTV Obsessed: The Game contains roughly 20 mini-games that are organized within levels called "eras" that must be unlocked by playing through the Time Travel mode of play.

Time Travel begins with the "Dark Ages," a time when games were played on a table top, with pencil and paper, or even with just your hands. Similarly, the game presents several mini-games from this era that you must beat to unlock new games from other eras. In the dark ages you will play games like Checkers, Rock-Paper-Scissors, and Hangman. The mini-games from this era should be self-explanatory, just follow the on-screen instructions for each.

"The Dawn" features mini-games similar to those from the dawn of the video game era; games like Space Invaders, Pitfall, Snake and Pong. Each mini-game in this era is a race against the clock, putting you to the task of beating each mini-game you face. For Space Invaders, you must clear the board of all enemies. For Pong, you simply need to tie or beat the computer's score. Each mini-game has its own objective, and you will need to beat 12 levels—each of increasing difficulty—to unlock this era's bonus game: a Pacman clone named Lawnmower Mayhem. Beat the bonus game to unlock "The Golden Age" era.

The Golden Age features games similar to Frogger, Breakout, Asteroids, and Duck Hunt. This era, like the one before it, requires you to beat 12 levels to unlock the bonus game, which you will also need to beat to unlock the final era of the game.

A practice mode is also available that you can use to brush up on each of the games independently. You may only play games that have already been unlocked.

Analysis: The game features familiar gameplay from many classic games. In fact, it is a virtual hall-of-fame of classic gameplay delivered WarioWare style via Flash in your favorite browser. Overall, it is quite an achievement for a Flash game, one that includes several eras of unlockable content that gives players an incentive to keep playing until everything is beaten.

On the downside, there are some control issues, bugs, and gameplay balancing issues that will undoubtedly cause some players frustration. For example, the control in Treasure Hunt is so unresponsive at times that it makes the levels nearly impossible to complete. Reloading a second time in the Duck Hunt game requires key mashing on the keyboard, though I am still not quite sure how I even got it to work.

Other issues I noticed: There is a large boulder in one of the Treasure Hunt levels that appears to be impossible to jump over. The crocodiles are also very difficult to get the jumping just right. The Breakout level does not provide enough time to get all of the bricks before the time runs out, while the Frogger game provides significantly more time than necessary.

The game was developed by Say Design and it was only just recently introduced to MTV's website. It's so new that I know the developers are still working out the bugs, and a new build of the game should be available on the site soon. Hopefully it will address some of the issues I noted above. Give it a try, and let me know what you think in the comments. Click.

For the treasure hunt with the huge boulder, I think you're supposed to go underground via the ladder in the previous screen, unless you're talking about a different large boulder. With my skills at jumping on animals, that's entirely possible.

Yea.. I agree that jumping over things in Treasure Hunt has me stuck. :( I'm not giving up though. Great game, Jay. Thanks!

For the most part I have been a huge fan of the flash games posted here on jayisgames, but the MTV game is an expectation. Yes, I do know that by me going against a game from MTV, I seem like a zealot defending some counter/uber flash culture/medium. However, in the past i have enjoyed large corporations dabbling into flash, but this MTV flash advert has almost no artist direction-and the controls are rather frustrating
-but that's the point DUDE, it's RETRO.

Hey since when has it been better to use IE??? Do not use Firefox for this game as none of the arrow controls work on that treasure hunt game all i could do is jump! :-(

PS. A belated Birthday wish for you Jay! =)

Jamie, it's perfectly acceptable to take exception with a game posted here, and even one from MTV. You are right, the controls are rubbish in this game, even though the developers did an exceptional job of blending so many classic games into one. I believe the game suffers mostly because each classic clone doesn't quite possess the same gameplay and control that made its original great fun.

As far as artist direction, I am sure that each of the games was made to look different than the original to avoid copyright issues.

And, thank you kindly, Kel-Laydee! =)

I love the retro feel of these games! (Although, would someone tell me when Pacman and Depeche Mode became retro? When I was a kid, "retro" meant poodle skirts, jukeboxes and slicked back hair.)

About the game, though... I have mixed feelings about the speed it runs at in IE. I can get through the treasure hunt (though not over the crocodiles if it gives me them) but I find the space-invaders-type game and the worm game near impossible as they speed up. The first few times around, it's fine. By the third play, however, it's too fast to deal with. I know it wasn't like that on my old Atari 800xl! :)

I worked on some of the graphics for this - the Galaga boss level and the Asteroids level, and really enjoyed working on it. Sadly they didn't use the DDR and Twisted Metal graphics, but what the hey - it was a nice gig.

Must be because im using opera i guess

Gah... Everything is geared for IE, hopefully soon that will change...

is this the product of when mtv was looking for game designers earlier?

I doubt it, Kendrick. I believe those job postings were for internal positions at MTV, and this game was created by an independent game developer.

I'm thinking that MTV wants to create their own games in-house, rather than outsourcing the work.

Sounds great, Steve. I'll bet it was a fun project to work on. Unfortunately, I have yet to see the Galaga boss stage due to the wonky control issues I mentioned.

treasurehunt controls completely nonresponsive with no relief in sight :/

This game is kind of a rip-off of a GBA game called "Wario warez" or something like that, which is a far better, faster and satisfying game.

But I have to admire the effort that went into this - many games, different control schemes, graphics - it's all pretty amazing. Too bad that it gets repetitive and has absolutely no replay value.

Anyway, check out the Wario game. You WILL be pleasantly surprised.

Pretty cool game. I like how it goes through the various "eras" and everything. The Treasure Hunt and the Space Invader-like game.

(Awesome color scheme too, Jay. Very in-step with the holidays. ^_^)

oh man that sux! not enough bats went across the screen in shoot the bats, i missed 2 and was 12 from the target when timer finished.