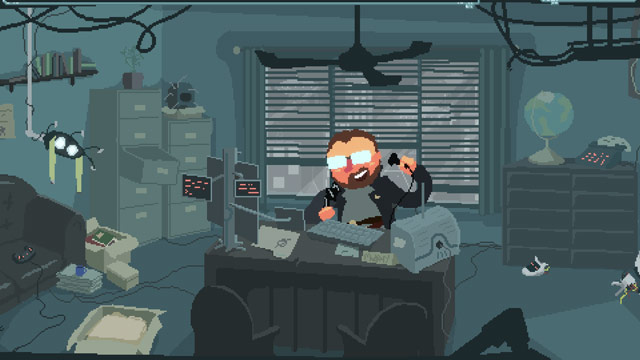 Welcome to the future of 2017, dudes and dudettes, and it's like, totally rad. Or so you might think if you're freelance detective/police officer Jonathan Murphy P.I. Jonathan spends most of his time casually surfing the 'net catching up on the latest "dank memes," probably more even more so than actually working. It all takes a serious turn (or does it? You paying attention, Jonathan?!) when there's a case of "murder gone deadly" (are there non-deadly murders?) and you're pressed into service alongside a couple of old buddies. Or, as Jon might put it, it's "time to go crime-solve a crime!"

Delve into a world where post-millennial clashes with dystopian cyberpunk in a bright colored and quirky point-and-click game. Apparently, our friend Jon has failed to pay the bills for the past 11 years (!) or so, and has thus been locked in his office until he remits payment underneath his office door. But Jon isn't going to be troubled by the simple likes of a slightly claustrophobic workspace. There are, in fact, other exits to one's office, such as the window. Even if the window is on a high story of the building and you might have to improvise a weapon to break it. 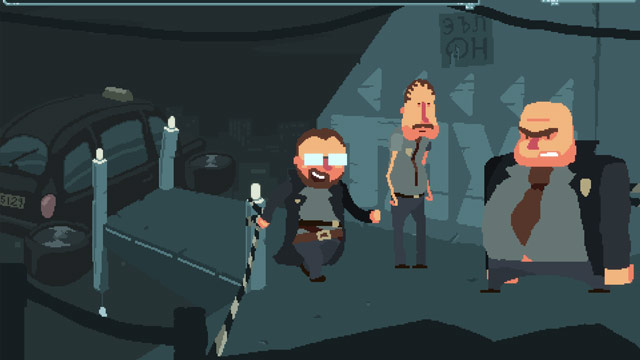 With the aide of your longtime friend and sidekick "Juice" (whose name, by the way, becomes a glutton for terrible pun-ishment), you'll have to explore this point-and-click narrative set in alternative cyberpunk universe. I'm really not kidding about the puns by the way, as they are present everywhere and perhaps the best part of the game. One thing I really appreciated and enjoyed was the meticulous attention to detail to many of the objects within the scenes, particularly the detective's office. Although many of them are not directly involved with the story, having them there and able to be interacted with creates a nice personification. It also adds vivid color to the detective's life and backstory, so you'll certainly want to click around and examine everything if you're interested in enriching the character development of the experience for yourself.

Despite everything that's changed from our ordinary world of today (like the apparent invention of hovertaxis and higher-powered neuron stimulation for the brain), Murdercide's world interestingly draws several parallels to our own. First of all, the detective is still stuck working in a tall high-rise. He has his own high-tech robotic puppy that follows him around and doesn't quite seem to function properly (Jon finds another use for it, but I don't have the heart to spoil it for you here). There's still the 'net, where one can argue with an endless barrage of strangers about trivial things, or do something far more constructive like seeking out fresh memes. Annoying company/police protocols still seem to be in place, and despite being no cadet on the force, Jon has not seemed to acquire any affection for these rules. Last but not least, reality television programming has failed to gain status as a classic but is somehow still alive and present, with conscription into it as a thinly veiled threat.

To top off the visual aspects of the adventure, Murdercide is also beautifully voice acted. Controls are similar to most point-and-clicks: use the left mouse button to walk or interact with objects and right-click to examine them. Mousing over the top-left part of the screen permits access to your inventory, and top-right brings up the options screen. Here you can use an item on another hotspot in the environment, or toggle subtitles, volume, or save and quit the game for now if you want to return to the real [current year].

Out of a number of games I've played this year, I'd have to say that Murdercide is probably one of the most entertaining and produced the most laughs. So grab your boogie board, because surf's up and it's time to catch some meme waves!