There have been a lot of My Little Pony games, but few are as ambitious as Equestrian Dreamers' Ace Attorney-style visual novel adventure game, over three years in the making. In the first finished installment, My Little Investigations: True Blue Scootaloo, you play pre-Alicorn Twilight Sparkle who decides to take matters into her own hooves when a certain pint-size Pegasus is accused of a crime. Explore Ponyville and the surrounding area, clicking on ponies and things to interact, and build a case file of clues and profiles that updates as you combine evidence and learn more information. When you talk to ponies, you'll occasionally have to interrogate them, which involves pressing them for information on statements you're suspicious about, and presenting evidence to back your statements up or catch them in a lie. Need some extra help? From time to time throughout the story, you'll team up with various ponies who have abilities that can help you in special situations, from greasing the wheels in conversation to some actual magic. 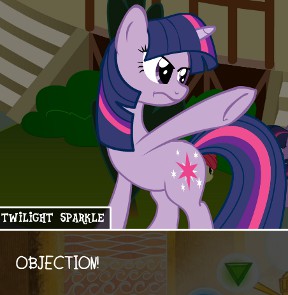 With full voice acting, custom music, art, and animations, My Little Investigations should raise some eyebrows for the sheer amount of work that's been poured into it alone, all from people who donated their time as a labor of love. While some of the voice actors sound much more like their chosen characters than others, and you could probably do without the annoying sound effects that pop up during conversation, the overall talent bar is still remarkably high, and the custom soundtrack is fantastic. Artwork is just as beautiful, especially in the cutscenes, and the pony sprites and animation you see as you explore the town look professionally done, even if the original character ponies tend to be so elaborate they stick out. The story itself feels like an episode of the series, and this has both its pros and cons. It relies a lot on you having watched the show to know what it's referencing for a lot of the gags, and if you are familiar with it, chances are you'll have everything figured out within the first ten minutes, but the writing is solid, silly or serious where it needs to be, and all the characters are, well... in character. Throw in some shoutouts to the fans in the form of everyone's favourite wall-eyed Pegasus, a certain pair of ponies hanging out together, and more, and you have a game that clearly shows the love the creators have for the source material. 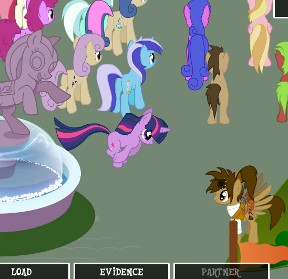 The biggest problem with the gameplay tends to come down to being unable to click to advance the slowly scrolling text unless you've seen it before, which can bog down the pace. Though the overall difficulty is on the low side, the game picks up once the interrogations start coming with limitations. Occasionally it seems like there should be more than one option for the piece of evidence any given scenario is asking for, or that Twilight makes some pretty spectacular leaps in logic in order to find clues, but, well, I guess that's why I'm only Celestia's number two student. Diehard bronies will, of course, find things to nitpick, but the bottom line is that My Little Investigations is an incredible feat. It's polished, engaging, and full of detail, and it should make you very, very excited for the planned future installments.

linux:
Get the free full version

Hm. So far, it's pretty good. A bit tedious, yeah, with the slow speaking and such. But I love how much work has been put into it! Hell, I was impressed by the opening group logo! I highly recommend it.

I've never been a MLP fan, but this is so far EXCELLENT. A great point and click, awesome detective story, and phenomenal voice acting.

I did get annoyed with the lengthy conversation bits at first, but once I got into the game, I came to enjoy even that. Most of the voice acting is really good, with the mane character voices ranging from decent to spot on. From the writing to the animation to the music, this game is phenomenal. I think it connects well to the original characters and the show. I give it two hooves up /) /)

Fortunately, you can go into the Options and turn on "Allow skipping of unread text" or whatever it's called.

Yeah, this is amazingly good. A couple bugs though:

During the "confrontations," the character icons in the upper right and left corners of the screen start glitching and displaying bits of other sprites. It doesn't affect gameplay at all, but it looks really weird.

Also, it crashed at one point when I tried to combine an evidence with a profile. But I tried it again and it worked the second time, so I guess it was a one-off thing?

Now... how do I prove Spike innocent? I'm stuck on the second confrontation.

Yeah, these final confrontations have been tough! To answer your question:

To prove Spike innocent, present the evidence of the small gems to the dog's dialogue where he claims that the theft is no different from Spike's previous greedy rampage that destroyed the town

Ah, so THAT'S the line you're supposed to present it on. I'd tried it the one where he says "He has an appetite for gems."

At first I thought the answer was something about how Spike couldn't have broken the window because Scootaloo did it, but apparently not.

I had both those problems as well. Knowing which evidence to present for which dialogue is difficult with this game.