Sometimes I feel like I haven't done enough with my life. I mean, look at Amber; thirty years ago, with the help of a pair of shamans, she managed to defeat the Chaos God. Way more Gods than I have ever defeated. I kind of feel like I'm slacking here. Especially since, upon receiving a letter from her friend Sister Martha, Amber is hurrying back to Westwind Village to finally deal with the Chaos God's disciples once and for all. Mystery Age: The Dark Priests is a hefty hidden-object adventure game that brings some serious eye-candy to the table. After all, just because you're defeating ancient unspeakable evils doesn't mean you can't look good doing it. 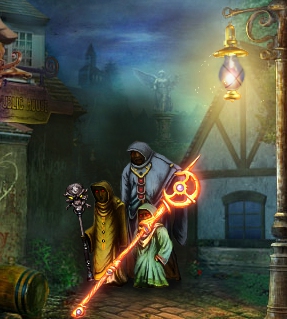 Part adventure game, part hidden-object, Mystery Age: The Dark Priests blends both genres and adds a shiny coat of polish. As Amber, you'll have to unlock the secrets and mysteries surrounding Westwind Village in order to save the villagers (and the world!) from the plan the Dark Priests are hatching. It's a little less pot-luck charity luncheon and a little more darkness overwhelming the land and turning you and all you love into cold, unfeeling stone. Which is a little unfair; the least they could do is give you a hot meal first.

Rather than rummaging through a list of unrelated items to find the single thing you really need, you'll be hunting down bits and pieces of contraptions you'll need to assemble to use within the scene. Hidden-object enthusiasts will be happy to hear that the game is actually fairly long, and with a plethora of scenes to hunt through and items to assemble. While some of the items you'll encounter during regular gameplay can be carried with you to use later, others are actually just interactive bits of scenery, so you'll have to experiment to make sure you leave no stone unturned, no snake un-poked, no bees nest un-prodded. Come on, it's for the villagers. 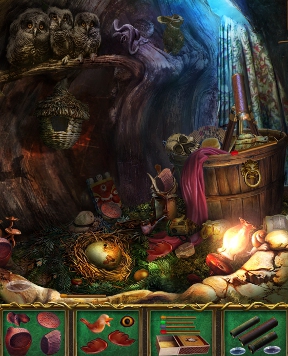 Analysis: If the whole casual download market were a prom, then Mystery Age would be the Prom Queen, or at least a strong contender. This game is pretty. No, wait, strike that... this game is gorgeous, and as much love has been put into everything from its art to its audio to its general gameplay design. The assembly aspect of the object hunting is actually a good excuse to be looking for all the items you are, and in most cases they're usually all things you'd expect to find within your location anyway. A pleasant change, then, from hunting down three pineapples, a tin soldier, and a bulldog in an apothecary. The gameplay is also, happily, quite varied; instead of collecting a slew of puzzles pieces to solve one problem and then repeating that ad nauseam, you'll find yourself performing a multitude of different tasks in every area, complete with tricky puzzles, that keeps the experience from getting stale.

The downside is that the items you're putting together rarely seem as if they'd actually be required; one scene has you scavenging bits of food you need to lure a mouse away from a magnet that's part of a group of items you need to lift a weight out of a jar. Not, you know, a Saw-style jaw with boobytraps and spinning blades. A jar you could easily tip over or reach inside. Because you wind up carrying so many items, you also have the potential to be more easily frustrated by adventure game logic; a window can be broken by a rock, for example, but not a hammer. You can't use a ladder to reach something on a high shelf, because you need it to reach something else that's high up. Apparently, in this world, ladders have a very strict one-time usage retirement plan.

But what it gets right is providing stunning, immersive environments that are a real joy to explore, and it's hard to stay mad at something that looks and plays this smoothly. While you might wind up wishing the story had been a bit more intertwined with the gameplay, Mystery Age: The Dark Priests is a beautiful adventure that will provide just the sort of meaty chunk of soothing gameplay we could all use once in a while. Fans of the genre should definitely check out the demo; whether the story and setting appeals to you or not, it's hard to deny that more developers of the genre should be putting at least half as much love into their creations as is present here.

After finding all pieces of an object, it will go into the empty slot on the right side of this bar. Most of them you will need in the same hidden-object scene to reveal other parts. One stays in your inventory for later use.

House of the Carpenter. Outside

House of the Carpenter. Inside

hello...? umm Dora. I think maybe there is an issue at bigfish. I have tried to download the trial version several times. And each time it says thay i need adobe Flash, and doesn't complete the install. (i have even upgraded flash) Looking at the votes cast and how empty this "room" is. I'd say lots of other people are having similar issues? Can you look into this please...

Hi little_geoff. :) I'm sorry to hear you're having issues, but yours is actually the first report of trouble we've had with this. In general, the comments on the weekend affiliate reviews tend to be a little quiet anyway, so this isn't necessarily an indication of lots of people having issues. Not knowing more about your computer (and unfortunately not being very good with technical troubleshooting myself) I recommend you contact Big Fish Games support:

Please make sure you fill out the form and provide all the details you can. Big Fish Games has fantastic customer service and will get back to you ASAP. Since they work with the game developers, they will be better equipped to figure out exactly what the problem is and help find a solution.

I hope it works out for you!

Thanks Dora! I have submitted my question, but i have also found all my Previously purchased games! Yeah!...i know, everyone is rolling eyes at me. But its nice to see that after several O/S re-installs, those games are still available to download.

After finding all pieces of an object, it will go into the empty slot on the right side of this bar. Most of them you will need in the same hidden-object scene to reveal other parts. One stays in your inventory for later use.

House of the Carpenter. Outside

House of the Carpenter. Inside