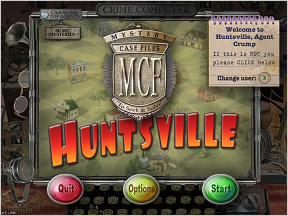 If you are anything like me, you are positively salivating with anticipation for the upcoming release of Mystery Case Files: Return to Ravenhearst, leading to all sorts of embarrassing situations wherein you are forced to apologize to perfect strangers for drooling all over them absent-mindedly. It's okay, not everyone shares our enthusiasm. We just need to find a more sanitary way to pass the time until the new release is announced, and what better way than to go all the way back to the beginning?

Back before you were referred to as "Master Detective," before your journey to a haunted English manor, before your exploits in a rundown carnival, you were nothing more than a lowly intern. When an epidemic of crime breaks out in the once quiet town of Huntsville, though, your chance to rise to detective greatness finally arrives. Now you must work against the clock to catch the wrong doers in the act by using your keen eye to pick up on the clues that no one else seems able to find. 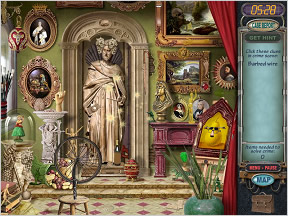 Though lacking in the kinds of mini-games that inhabit the later titles in the series, Mystery Case Files: Huntsville still has many of the qualities that put the series at the head of the pack in the Hidden Object genre. The settings are beautiful, the music is almost pitch perfect, and there is that tongue in cheek sense of humor that keeps a smile on your face.

But most importantly, I think, Mystery Case Files gets the hidden object aspect right where so many other clones seem to fail; instead of hiding the objects by shrinking them down, putting them far away in the scenery, and in general making them almost indiscernible from any other four random pixels, Huntsville relies on cleverness, using color, patterns, and shapes, to hide objects in plain view. It is this subtle difference that I believe puts Huntsville and its sequels head and shoulders above so many other hidden object titles.

Your write-up here has tickled my hidden-object bone. I should go back and see the game that started it all. Especially since I just recently finished Mystery Case Files: MillionHeir for the DS.

Back from the days when hidden object games were an interesting peculiarity. Ah, good old days...