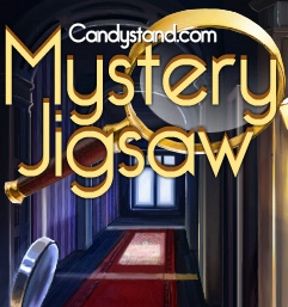 Adolescence is a problematic time for everyone. We are forced to cope with peer pressure, overbearing parents, hormones, and the worst of all, having to act as independent preteen detectives in our free time. Ask Peter and Jenny, the sibling stars of the flash based hidden object/mystery game, Mystery Jigsaw. They would know.

They have the rotten luck of growing up in a house so big that their parents rent out whole sections of it to their friends. Okay, this isn't so bad, or at least it wouldn't be if it weren't for the fact that now minor thefts and petty crimes are popping up around the house and no one else is doing anything about it. What are a young brother and sister duo to do? Investigate, of course!

In Mystery Jigsaw you will be faced with four bite sized mysteries. In each mystery you will have to follow in the footsteps of the dastardly villain from one room to the next. For each scene you first have to piece it together, literally, by solving a jigsaw puzzle. Then you'll get down to searching for clues with a little help from whichever one of the siblings you have chosen to help.

Once you have visited all of the scenes of the crime and collected all of the clues, you move on to the accusation portion of the mystery. Here you will be confronted with a handful of suspects and allowed to read a brief description of who they are and what habits and distinguishing characteristics they have. Using these descriptions, you match up the clues you found during your investigations to the suspects. From there, you just need to figure out which suspect the clues condemn the most and make your accusation. Good luck junior detectives. Do well, and there might be a paperback series in the future. Fail, and, well, you'll have to go through adolescence like the rest of us. 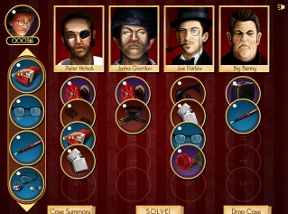 Analysis: Free, browser based hidden object games are an uncommon commodity. Good browser based hidden object games, naturally, are even more rare which is what makes Mystery Jigsaw so special. From its interesting yet family friendly concept, to the attractive scenes, to even the fairly original accusation sequence at the end of each mystery, it wouldn't be a stretch to see this title as a purchasable download. The graphics are impressive and do a good job of instilling that feeling of childhood exploration while the music, though a little repetitive, can also be surprisingly catchy. In fact, one wouldn't have to make too many major improvements to the gameplay, the developers would simply have to provide more of it.

What is provided is a treat for hidden object fans with little time or cash on their hands. There's a surprisingly decent amount of gameplay to be had packed tight into this little title with just under a dozen scenes and four full mysteries to solve. On top of this, there's a good nod to replayability provided by two difficulty settings and constantly changing object locations and potential suspects. There may not be the grand parade of mini-games that have come to populate your standard hidden object these days, but Mystery Jigsaw makes up for that by providing three solid and distinctive gameplay modes that do a good job of keeping the rhythm.

Mystery Jigsaw does make some missteps. For one, the hint system is poorly conceived. Instead of having time delayed hints, or a limited number of hints you can deploy when you need them most, the clues you need to find in each scene will periodically sparkle. This is most frustrating when the sparkle comes just when you were about to find the object on your own (which, of course, is what happened to me every time. I never actually needed those hints). Unfortunately, you'll probably have to rely upon the hints several times as you play. Many of the clues you need to find will be small items which can induce some serious squinting when you consider that the game screen is shrunken to fit inside your browser. Despite this, many will probably come away with the feeling that Mystery Jigsaw is maybe just a little too easy.

While these issues are trying, they shouldn't detract from the fact that this is one of the best browser based hidden object games out there. It manages to fuse together that sense of mystery and adventure of our youth with the addictive gameplay of jigsaw puzzles and hidden object games, and cram all of that into coffee break sized chunks.

This is a great game!
I haven't gone in far enough to ascertain the difficulty levels, but so far playing from the character of Jenny, it's quite easy.

I agree with you about the hint system. What also bothers me about it is that the sparkle is so small and so brief, as soon as I hear the sound effect and start looking for it, it's gone.

Also, the whodunnit at the end of each case is rather confusing. Is it a matter of whoever has the most clues assigned to them?

Hmmm, I wouldn't call this game a hidden object game. It's a nicely done jigsaw mystery game - with quick 30 seconds of "hidden object" sequences inbetween.
Also, I agree that the hint system is not well implemented.
Since this episode is called Case One, I assume that there will be a sequel, and I hope that the next case will be improved (maybe a bit more hidden object, and a hint system where you can ask for hints if you need them).

Fun enough, but I personally found the Clue-Distribution/Solving step in the process to be poorly designed and implemented. Enough so that I stopped playing after a couple "cases". More time spent designing sensible and solvable solutions to these crimes would have made me feel like it was more of a worthwhile diversion.

Still, slick and welldesigned, and it's nice as the review says to see a browser-based hidden object game, but they need a good writer to add a little EncyclopediaBrown to the proceedings.

Is it just me or do Peter and Jenny look like Ron and Hermione?

You don't know how hard it was to write this review without making that connection.

I thought it was more Harry and Hermione. but I didn't play as Peter.

Yeah, I played case one twice, and each time after sensibly assigning all the clues I could, one suspect was clearly ahead-but some one else was "guilty". The game explain why all their clues fit, but not why they were a better choice.

After doing all the puzzles twice, I didn't really feel like doing them a third time.

The clue / solve system is terrible. The matchups are both mindlessly straightforward and hopelessly vague. The jigsaw puzzles are meanwhile stupidly simple.

There's no game here, only annoyance and boredom.

Regarding the clue/deduction system:
As far as I can tell, it's not a matter of

the suspect who has the most clues that work for them

being the guilty one, it's

the suspect who has all of their distinguishing characteristics matched up with a clue.

In every game I've played, there is only one suspect who meets this criterion. The other three always have

at least one thing mentioned in their descriptions that doesn't have any corresponding clue.

Anyone else extremely annoyed by the video ads' audio chiming in? Makes me want to find an ad blocker.

Hidden objects require almost pixel hunting or waiting for the too quickly show glint. Assembling clues interface was more of an 'in-your-face'.

After Clue Sweeper from the 16th, this was a huge disappointment.

This feels more like a chore than a game. Ugh.