A rash of murders plaguing a small town brings an FBI agent back home for the first time in years. Haunted by memories of vague, unsettling nightmares that plagued her as a child, she doesn't suspect that she has a deeper connection to these disturbing incidents than she could ever imagine. Mystery Valley is a hidden-object adventure game with one of the moodiest, creepiest atmospheres you'll ever come across... and jump scares. A whole bushel of 'em. While it has its flaws, it's still a lot of fun. It also proves what I've always said; never trust a bathtub. 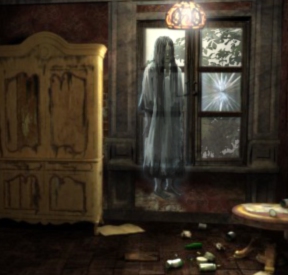 As Special Agent Yournamehere, you quickly discover the latest victim in these brutal slayings, a reclusive professor, had quite an interest in one place; Mystery Valley. As it happens, our Agent's hometown is none other than Mystery Valley, which is a bit less on charming tourist-trap bed-and-breakfasts, and a bit more on ancient, unspeakable evil. Much of the story plays out in cutscenes, so be sure not to skip them or you won't have any idea what's going on. Depending on your preferred level of difficulty, you'll have tutorials present throughout the game, and hint/skip buttons that recharge slower or faster. You'll still use your mouse to play, and the cursor changes to mark areas or items you can interact with. If you don't know where to go, click on the journal in the lower left corner; it keeps track of the things you find and usually points you in the right direction.

Analysis: I know I talk a lot about atmosphere. If I had to pay royalties every time I used the word, I'd probably be putting someone's kids through college. But friend, this is one creepy game. The areas are shabby and neglected, full of subtle ambient sound and environmental effects, and the soundtrack is lovely. It's actually because of this great moody pacing and quiet environments that the jump scares are all the more effective when they happen. Sure they're not the most elegant of methods, and not everyone enjoys them, but darned if they won't make you jump even when you see them coming. 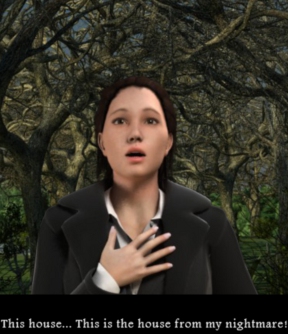 The hidden-object scenes fare worse. Not only are they dull, they're out of place. They feel like they've been tacked on just to make the game longer, or maybe to appeal to a broader audience. It doesn't really negatively impact the game, but it does sort of make you long for the days when an adventure game could just be a good ol' fashioned "use key on door" adventure game and not make you pick up a crab, a bowtie, and six canaries before you could get the key in the first place. Thankfully, most of the game relies on standard point-and-click play and is better for it. The pacing is quick, there is typically very little backtracking, and the solutions for item-based puzzles are always logical and clear.

For a game to put the word "mystery" right there in the title, it better darn well intrigue, and happily, the story is creepy and interesting from the get-go. Don't get me wrong, we're not talking Steinbeck here; it's definitely a little cheesy and the stiff, almost terse writing sort of feels like it might be due to translation issues. The game definitely would have been stronger overall if the writing had been beefed up a little. Still, the way the bits of story and weird happenings are revealed in such a way that you want to find out more, and the different locations keep you from feeling bored or stuck.

Think back to your childhood. Were you the sort of kid who, during a scary movie, had to sit with a blanket over your head (everyone knows monsters can't get you through blankets), but were still having the time of your life? Then Mystery Valley might be right up your proverbial alley. While it doesn't break any molds and won't cause any gameplay epiphanies, it's a thoroughly entertaining and enjoyable title that fans of BOOGEY-BOO scares and fanged doll heads will definitely find fun.

Get the skeleton key

Please tell me this isn't another one of those games that limits you on the "enter your name here" section.

WHY do so many of these games think eight characters is long enough? It's not like there's exactly a storage-space limitation.

I just tried the demo from Big Fish. It was okay, but the typos in the sub-text was very distracting. Does proofreading mean anything anymore?

HI,
I'm quite enjoying this, but I am stuck.
I'm in the basement, near the vampires.
I have a fiery torch and have no idea what to do with it. Can anyone help?
Thanks
Vic

Get the skeleton key

The code I was given to open the locker does not work. It is the same one that is in the book. Help I am stuck. I cant get the camera

What is the code when you are at the altar?

I also am stuck in that I can't open the locker with the code given me so I can't get the camera and I can't move on.

I did not find the vial of red liquid in the bookcase and therefore am stuck. Any ideas? It's simply not where it's supposed to be.

Is there any way to restart just one chapter of the game without having to restart the whole game. I am on "Night" and I put the red and green liquids into the distiller, but it is only recognizing that I put the green in, and I can't move on with the game...SO FRUSTRATING!! Help please!

I also agree about the typos as well as the miss direction, ie: left meaning right side and vice versa. But I also am a wee bit trying to understand why the walkthrough ended so soon. I am also by the vampire{?} at the table drinking whatever and I cannot get any further. I am fairly new at this genre of search-and-find games and walkthroughs are important to me to help me understand the game, so I am confused as to where to go from here.

Gnomie, I just asked Kayleigh, the author of the walkthrough, and she had this to say about your question:

No, the walkthrough is complete and ends correctly.

As you (the player) does not drink anything in this game, my best guess is, that Gnomie is at:

The walkthrough goes on there until line 18, even though there is not much left to do. Maybe the cut scene was not activated or you did not put the holy water in the right place, but then it should be still in your inventory.

Hi,i`m only in second level but i have already stucked! Don`t know how to grow up that flower,the tap just dropping and dont know what to with that three things. Help :}

This is available for Mac OS X now, in case you want to update that info :).

If you get stuck, please state which items you have in your inventory, it's easier to direct you to the next step.
i've just finished the game but was also stuck at the vampire's whiskey glass forever...

i dont know what to do next at paved with good intention,i only have the green liquid,then i cannot find any clue about the puzzle with pictures of a dragon,castle,and soldiers,i can't even click on the wine bottle and glass at the table of the vampire.pls help

Got to last level where you need to put the distilled water in the green flask but wont pick up the flask so i can cook it and get my magic potion?

I have reached the end of the game and am now playing the extra game, "Daniel's Escape".

I have dynamite, straw and eggs. How do I make glue?

I am also stuck where you have to change the letters to BLOOD.....the lady says she has to get to Daniel that he might know what the italian writing means, but I don't seem to be able to get back to Daniel.....help!! In my inventory I have the red vial left. Thank you.

I just started the demo and am at the mansion. I can't find the tape for the electrical wire or something heavy to throw at the wall with water. I counld'nt find the letter M item in the room. I am stuck. Can anyone help me?

Also, why can't I get to see the demo or hints referred to on this page?

Have you tried reading the walkthrough that's posted above? That may help you.

I don't know what you mean by "why can't I get to see the demo or hints referred to on this page?"

And the hints referred to on this page is a complete walkhrough that we have written and provided above the comments. You need to click on the "Show Spoiler" button to view it. (Spoilers require Javascript, so make sure your browser has Javascript enabled.)

I see now how the walkthrough works....great! I thought it would spoil the whole game at once if I hit that.

I clicked on "download the demo" and got a warning (this file could harm you computer) about saving this file. I did not save it, obviously. Do you know why that is happening?

Thank you alot for your prompt reply, I thougth I would have to wait for months. :)

You won't find another site out there like us. :)

As for the download, I can guarantee the file is ok and will not harm your computer, as it's coming directly from Big Fish Games, a highly reputable company with excellent customer support. I think the reason you are seeing that is that it's an executable file, and most browsers these days will provide a general warning that executable files may harm your computer (if they contain malware, but this one does not). I hope that helps!

hey i am unable to unlock the cupboard dial code as i was not given and the code given in the book isnt being accepted ... what to do ?
i am talkng about the chapter 4 ... please help me.