Myths of the World: Stolen Spring

Winter is coming, my sweet summer child... This, minus the bloodshed and the direwolves, neatly sums up the plot of Myths of the World: Stolen Spring, an icy cold hidden-object adventure by Eipix Entertainment. Set in the enchanting, yet fierce world of Slavic mythology, Stolen Spring tells the tale of Vesna, the goddess of spring and Morana, the goddess of winter, as they wage the everlasting war of snowy slumber and flowery rebirth. 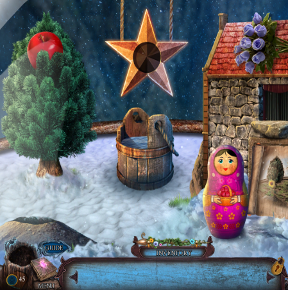 One day, you find your village encrusted in ice and vow to stop Morana from spreading icicles everywhere. With Vesna's help, you will set out on a quest to bring back the birds and the bees... you hippie. Luck is on your side, though, because the Slavic winter looks pretty awesome. From cozy little cottages, to furry critters you'll get to save, to meeting the Slavic version of Santa, you could almost start thinking Morana has a point. Almost. On your way, you'll encounter a good number of standard item-hunting, hidden-object scenes and puzzles, all in pretty, lovingly made environments. It must be said that the puzzles might be too easy for most players, but they are still enjoyable. The hidden-object scenes come in two varieties and are a joy for those of us who prefer clarity and neatness to pixel-hunting, though you can still skip them and play match-3 instead. Stolen Spring has a few nice tricks up its sleeve: for example, you are given a magical brush which you will use to thaw frozen objects and scenes; you'll also have one of those adorable pet helpers, who can (adorably) gnaw on items to make something useful out of them. There is very little backtracking, as many items you find can be used in the same scene or shortly after, and the interactions are fairly logical and intuitive.

Myths of the World: Stolen Spring probably won't offer experienced players much of a challenge, but it certainly has enough charm to make it worthwhile. It steps bravely into a relatively little known mythology and spins a cohesive, pleasant story and, though it doesn't win any awards for ingenuity when it comes to gameplay, it is quite entertaining and almost Christmassy in its mostly serene depiction of winter. With about four hours of play time, Stolen Spring is the perfect game for a cold, late-autumn day and goes wonderfully with a cup of hot tea, preferably made in a Russian samovar.

Myths of the World: Stolen Spring is currently only available in a Collector's Edition, which includes a bonus level, concept art, wallpapers and more. Remember that Big Fish Game Club Members pay only $13.99 for Collector's Editions (or 2 club credits), and collector's editions count 3 card punches of 6 total needed for a free game.