In Mad Head Games' hidden-object adventure Nevertales: Shattered Image, you and your husband, Pierre, have your hands full with your daughter Alice. Only instead of normal pre-teen annoyances like pirating music or putting the milk back in the fridge empty, she's been opening portals to other worlds even though you expressly told her not to. See, although you and Pierre share the same ability, Alice can open these portals using mirrors alone, and though you've warned her these places she opens doors to aren't always safe, your worst fears come to pass when you find her in a coma on the floor next to a broken mirror. The night she finally awakes, however, a strange creature hauls her off through yet another mirror, and to bring her safely home, you'll need to discover the root behind the mysterious power your family can wield, and put a stop to an ancient evil, because it isn't a hidden-object adventure if there's no ancient evil threatening something. I think that's the number one sign you might one day become a protagonist in a casual game is if your day-to-day life involves a lot of stories and warnings about ancient evils. Search for clues, solve puzzles and hidden-object scenes, and travel to worlds beyond your own in a way that the nerdiest of us always knew was possible. Butterfly in the skyyyyyyy.... 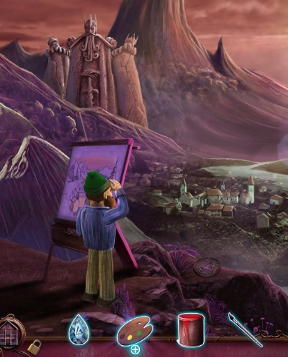 Nevertales: Shattered Image is an absolutely beautiful, beautiful game. Everything from the soft pastel colour palette to the crisp, clean detail that breathes life into environmental artwork sets the game head and shoulders above most others. The story makes a lot of references to the events of Nevertales: The Beauty Within, but stands well enough on its own that you don't need to have played its predecessor. It does a decent job of filling you in anyway, explaining about the concept of using books to literally travel to different worlds through the power of imagination (... was LeVar Burton involved in this?), and you use this ability several times to jump to wonderfully varied locations. The story revolving around finding out the origins behind the creature who's absconded with Alice is an appealing mix between light horror and storybook fantasy, and the high quality production values will make sure you're sucked right in. Magic carpet rides? My very own Bubo? Creepy shadow creatures that have been stalking a little girl for months through her bedroom mirror? Awwwww yeah, sign me up!

Unfortunately, as intriguing as the plot is, it's hampered by the fact that the game's pacing is something akin to molasses. You'll spend a lot of time going back and forth for every step forward you take, and the difficultly level on the whole seems rather sedate. There's an odd abundance of memory or matching puzzles, and the biggest challenge you might encounter with the core point-and-click gameplay is that the interface feels a little clunky and unintuitive when it comes to manipulating certain items. Nevertales: Shattered Image feels like it was made to be a family adventure, however, which isn't a bad thing, and is harder than it sounds to pull off. It's filled with cutscenes and references to classic literature that are fun to spot, and the Collector's Edition comes with more than just the single bonus adventure you've come to expect. It's a solid length at around four hours for the main game, and the sort of thing you'll want to play straight through in a single sitting. Though veterans of the genre will likely with there was more depth to its difficulty, Nevertales: Shattered Image is nevertheless a stunning and engrossing game from start to finish with a surprising amount of meat on the bones of the tale it's trying to tell.