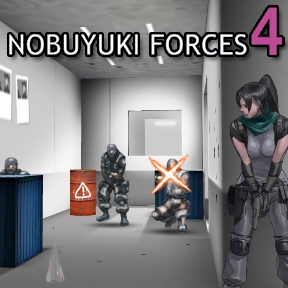 Just because time passes doesn't mean a sequel can't happen. The recent Tron movie? It was made over 28 years after the original. How about the Wizard of Oz? 46 years passed between it and its dark sequel in 1985. And back in December of 2006, Jay Is Games reviewed a 2003 title by Takahiro Miyazawa and SKT Products called Nobuyuki Forces 3 (NF3). Nobuyuki means "faithful happiness" in Japanese, and indeed, the faithful can now be happy since a sequel to the 2003 hit has finally emerged that's been nearly eight years in the making: Nobuyuki Forces 4.

Nobuyuki Forces 4 (NF4) is essentially a remake of the popular 2003 3rd-person rail shooter, which itself was an ode to games like Time Crisis and House of the Dead. Once again you play a wily female soldier that has infiltrated an office complex, trying to get to the top of the building to face off against a powerful enemy. Each scene begins with your character behind some sort of cover. As enemy soldiers appear, you must first hold [space] to uncover yourself, then use the mouse to aim and shoot at the enemy, and finally release [space] to return to cover. You have limited bullets in your gun, but unlimited ammo that can be reloaded by clicking the mouse while behind cover. The regular "mission" mode has unlimited time, but the unlocked time-based portion requires you to leave your cover more often to avoid running out of time.

While much is the same, this latest follow-up also includes several updates over the original. Fans of the 2003 game will notice that every location from that title is here, but whereas NF3 was presented in a stark, line-art vector style, NF4 has a more modern, comic book look with 2D and 3D elements. There's more animation, sharper environments, voiceovers, and a nifty virtual reality-like screen movement as you aim at the enemy. Collectable upgrades during gameplay are here like before, but now you can also customize your starting statistics (HP, damage, reload speed, bullet capacity, and item capacity) to suit your playing style.

There's a lot to like about Nobuyuki Forces 4. It's a fun 3D shooter with a substantial number of stages, and lots of replay value due to multiple difficulty levels, different game modes, and loads of achievement emblems to collect. It can be a tough game requiring precise mouse control, but gameplay feels rewarding. All told, NF4 is a solid break game you may find yourself coming back to, at least until the next sequel comes.

Thanks to Anon for sending this one in!

Hmm, the camera movement makes it a little goofy to aim sometimes but you learn to work with it. How do you dodge the tank? I can't figure out how to move out from behind the pillar before it blows up,

one of the best exemplary flash games out there for on-the-rail shooters.
I would give it 6/5 if i could. I would say this would make a good match with Sierra 7, another game of the same genre from Armorgames.

I don't know.. it tells me to press the mouse button, but when I do that it just reloads and I get killed.

I couldn't exactly find a good strategy beyond plain luck in this game. That and the HUGE loading times that don't have any indication that they are loading times (the first time I thought it was frozen) I conclude that the game isn't quite polished yet. It's a damn good idea, though!

Didn't have any of the massive loading times that people were noting on the Kongregate site, or that Diego above experienced.

I loved the third one, and was loving this one, until it ended, all too quickly. >:

As for dodging the tank, to be explicit:

The circle that appears over on the right, of segments around a mouse? Just click one of them and it will take you away, even though it looks like you've been hit anyway. If you want it easy, just memorise where that pops up and start mashing around there while in cover, as you can only damage the tank a certain amount every column, and after that, there's obviously no incentive to leave cover.