Realore Studios knows a thing or two about the road building resource management genre. The team has produced several great hits, including All My Gods and the unusually unique Adelantado Trilogy: Book One. Now, with the release of Northern Tale, we return to the world of myth and magic to save a viking kingdom from the wrath of an evil witch. And what better way to cleanse the land than by working your way through stage after stage, busting up piles of rocks and collecting hunks of meat sitting on the ground?! 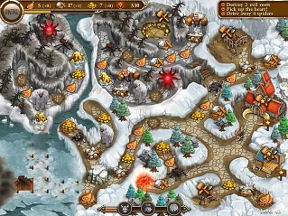 Regnar has just returned victorious from a great raid. As he steps on the shores of his homeland, he learns that an evil witch named Gesta has been destroying homes left and right, spreading her malice in the form of dark roots, evil stones, and malefic beings who terrorize the countryside. She even went and kidnapped Gesta's daughters (because apparently threatening his people wasn't irritating enough!). In order to rescue his family and save the kingdom, Regnar embarks upon a lengthy quest of decidedly anti-Gesta activities, including plucking every bit of evil from the soil with his own two hands!

You'll just need a mouse to play Northern Tale, and controlling is as easy as pointing and clicking. Each stage has a few simple goals that need to be met, and in order to get the work done, you'll have to direct the vikings stationed in the hut. Clear obstacles out of the way by clicking on them and waiting for the worker to do his thing. Most activities require resources to accomplish, so keep them well-stocked by gathering items sitting in the path, collecting them from spawning stumps, or by repairing and upgrading shops that provide regular tributes. Later, you'll also need to deal with things like evil enchanted wolves by repairing the druid's hut and allowing him to do his quasi-magical thing! 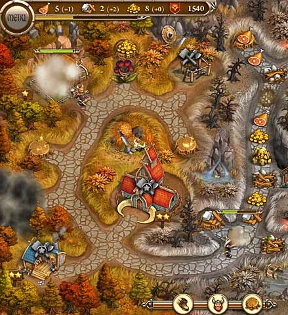 Analysis: Northern Tale shines by taking its genre very seriously. No corners were cut in bringing a solid resource management experience to your screen, so you can expect just about every minor annoyance present in other representatives of the genre to be all but absent in this release. Sick of timers putting pressure on you? Turn them off! Want to queue tasks? Go right ahead! Need to spend your time perfecting your resource gathering abilities? Getting a high score in each of the game's 50+ levels is all a part of the experience!

The scenery in Northern Tale changes as you complete groups of levels, moving through the seasons and presenting a stunning visual package each time. The game starts out a little slow, unfortunately, and if you've played Roads of Rome or another similar game, you might crave some sort of fast forward button so you can make it to the challenging levels filled with choices and dangers. Hang in there for at least half a dozen stages and you'll hit gold!

Realore Studios manages to create compelling resource management games as if it's second nature, and we love them for it! The core formula is the same but the fun never wanes. Northern Tale is precisely the kind of game that makes you stay up late so you can play "just one more level"!