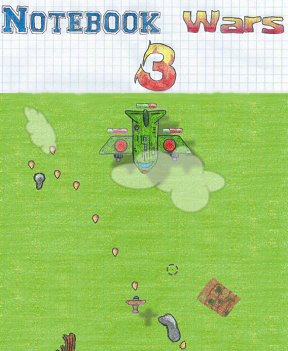 Attention all doodlers! Drop your pen and strap yourself to the keyboard, because Francisco Ferreres is here with another in his series of hand drawn, top-down, vertical scrolling shoot-em-ups, Notebook Wars 3. The game lets you take your preference of flying and firing with the mouse, or, if you prefer, the [WASD] keyboard controls with [K] for shooting. Be prepared for the margins to run red, green, and blue with pencil shavings once more!

Like Notebook Wars 2 before it, Notebook Wars 3 focuses on refining and extending the series' classic formula of shooting baddies, blasting bosses, collecting cash and buying upgrades. There are a number of new enemies and weapons to play around with, certainly, but the draw of the series has always been its unique aesthetic, which remains just as awesome as before. The developers have added two major features, though, and both of them are well-appreciated. Keyboard controls are new and will be appreciated by certain players, and there's also Frenetic Mode, which speeds up the sometimes-sluggish pace of the game considerably, fixing the most common complaint about the original. The combination of consistency and subtle improvements make Notebook Wars 3 a game that shooter-lovers, and fans of the previous installment especially, will find noteworthy.

What did this game do to get a 'yellow' rating?

The bullion bars max out at 30, and 30 are going to drop. Don't spend any bullion, and MAKE SURE TO GRAB IT!

This game is, like its fore bearers: Awesome. Very little grinding if you intelligently upgrade and equip weapons and planes. The later levels allow for earning 30K at a time so advanced weapons are easily obtained for the appropriate flow of difficulty versus a sense of wiping out you enemy.

Ignore the guy above, you can get more than 30 gold bullion bars in the version I'm playing.

I loaded up with triple homing missiles for the battleship level, and it's possible to find a spot where you take out turrets and the planes at the same time without needing to dodge bullets. Just get some snacks and watch 'em burn, almost meditative.