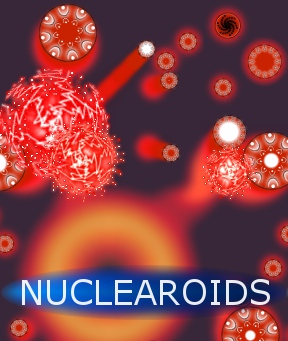 Nuclearoids is a chain reaction arcade game that will remind you a little of Boomshine. A collaboration between GameBalance (Warp Forest, Orbox) and Alexander Samarin, expect a whole lot of smooth color changes and great visual effects to go along with your physics-based orb collisions. It's a game of not-quite-controlled chaos that takes a big step in the webtoy direction.

Move the cursor around the field and hover over a viable explosion spot. Notice the trails that get pushed off the nuclearoids? Those indicate where the orbs will go and at what velocity after you cause that grand explosion. Orbs ricochet wildly and collide faster than you can keep track of, all with a glowing color change oscillating before your eyes. Try to knock around as many nuclearoids as you can with that click, as that's all you get to clear the target number to complete the level.

You'll notice a lot of little physics things go on while the nuclearoids are bouncing around the screen. Larger orbs attract smaller ones, often enticing them into orbit before they stick/collide. Black holes do pretty much what you think they would do, only in this universe, you can destroy them, which is kind of a power rush.

Nuclearoids creates a beautiful little mess of chaos that's like eating an entire bag of Halloween candy... with your eyes! In the gaming department, however, it suffers a bit, as you have very little control over what goes on after you make that fateful click. There's some strategy to be had with pushing certain orbs towards groups of orbs or other objects, but in the end, it's pretty random, so it's as much luck as it is planning. Because the presentation is so engrossing, though, it's a lot of fun to sit back and watch things interact.

Put some bright colors in front of your eyes and make some 'splosions with your mouse. You know you want to!

Thanks. I like review overal.
The game has little planin factor tho.

But yeah it's mostly out of controls like distance games for example.

Hey what if we make Nuclearoids 2 with Distance games features like upgrades and stuff :D

Any suggestions are welcome :)

I was enjoying this, and then I quitted to check out the achievements I seemed to be getting.

Only to not be able to find them, and then finding my progress was lost and I was starting from level 1 again.

Also I thought this was a good review, not overly wordy and to the point.

This game consists all the ingredients that create awesomness- Graphics, colors, explosions and trance music. This game is orgasm to the eyes :-P

The game having levels should have a level save feature as in the case of rc who posted earlier.
The game is good but a little hate to the repeating "you can restart any time you want from the menu" thing, the slow moving "level failed" and the "more games" button next to the "go" button.

It's very enjoyable. Even though there is an "end", it's still fun to just click something and watch the fireworks.

It'd be awesome if there was a random feature that didn't have a goal, just a bunch of different kinds of spheres every time.

Great physics. I would love to see the concept expanded in a second version. Some upgrades, levels with multiple clicks, etc...

Boomshine was perfect with its level of simplicity because of the music and sound effects. You're sitting there clicking yourself into oblivion and look up and realize you've been in a trance for the last hour.

This game is fun, but it doesn't cast the same trance like spell that boomshine did. I want to love it, but I need a little more.

The game has great style, but no gameplay. There's absolutely no skill involved; it's all just luck. Boring.

I like the fact that they act like stars and such with gravity and density. When one of the objects was about to explode, more objects were attracted to it from a farther distance. That made it really cool to watch. My only issue is that is based more on luck then anything else.

My issue was that if you closed out of the game, you had to start ALL the way over. A level select would have been nice.

Fun game. My issue is with the name. Sounds like a REALLY bad case of hemroids. ;P

I know its a matter of taste, and altough some years ago I liked to go on trance festivals, I not really enjoy techno/trance music in games. A beatless music is often much better game atmosphere. Id not misisng a strong beat since Im not going to dance to the game anyway.

I think it's a pretty decent game. Having virtually no control after the click has been made is the built-in feature of the genre, so it's only natural here...

I like how the player can decieive him/herself in these chain-reaction type games - after you've played many levelks you begin to think you can actually plan a little - well, no :) It's just the same blind luck you're playing over and over again... But, as I said, it's how the games of this genre usually work, so it would be unfair to beat it down on this one game in particular.

One more thing: having no contrl also means it's a true casual game: you just click and hope. Perfect: no need to think or concentrate hard, meticulously plan, wait a lot - just a couple of brainless minutes - you don't get much more "casual", do you? :)

Duno if this is down to some ingenial programming or just dumb bad kluck, but i seem to be failing an awful lot of the levels by just one thingy short... Just as if the game was mocking me, making me think im gonna make it - then leave one damn blob unblown :D :D :D

What's your strategy for level 15? lol

It'd help to be more explicit about what's actually happening here. As two objects sit in close proximity they build up a white core. When the core hits the perimeter of the circle, a regular nuclearoid will explode, pushing its partners away; a black hole will implode, pulling other objects together; and clusters will throw off tiny nuclearoids. The game is all about pushing (and pulling) things together (not so much colliding).

great effects, excellent...but is there any strategy?

I think there is less randomness than you suggest. There are some definite strategies for clearing the levels, and you can see how far and in what direction you will nudge the nuclearoids before clicking.

The main random element is the initial distribution -- after that, it's like trying to clear a pool table with one shot.

For the early levels, either I was fantastically lucky, or they are easy enough to beat by clicking anywhere. Now I'm at the level where I have to clear ALL medium nuclearoids, and I'm afraid I'm going to suddenly have to plan where to click. If planning is involved, I'd rather have a more gradual learning curve.

Apparently planning isn't involved. After about 20 tries, I managed to pass that level, and scoot on past several more levels on the first random try.

Now I'm on another "clear ALL" level, this time to clear all small nuclearoids. 10 tries so far - at least they're quick.

Time to stop - I'm not getting any sense of achievement from this.

For those who haven't tried Boomshine, I agree that this is similar, but I think Boomshine is much better (not to mention prettier).

I'm very curious about the top scores. There's a huge jump between ~270,000 (what one would expect) and 1.5 billion. Does anyone know of a secret way to replay levels to increase one's score? I don't think it's mathematically possible to get such a high score just playing each level once, even if one always succeeds on the first attempt, and clears each level. Is it?

It was a great game I wish it were longer. I also would like to see a few more types of balls in the game or different configurations. A mode for users to create levels could be interesting.

Oh and upgrades could be interesting. Sticky oids or stickier ones, longer stamina (they move farther before stopping), bigger explosions, etc.