Oknytt from Nemoria Entertainment is a old school-styled adventure game steeped in Swedish folklore. You play as a small unnamed creature who wakes to find itself inhabiting an unfamiliar world. By helping it solve a few puzzles and explore its surroundings, you and the small creature will slowly gain an understanding of its place in life. It's a beautiful, touching tale that's told at a gentle pace by a narrator who will make you feel like you're listening to a story sitting around the campfire with nowhere to go and nothing to do but become entranced. 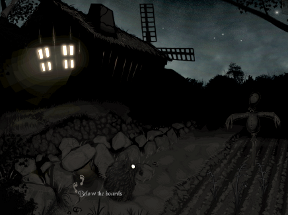 Click anywhere on the screen to move the small creature around. If something of interest catches your eye, click and hold to bring up a menu with three options: talk, interact, and lore. The former two do precisely what you would expect, while the latter serves as Oknytt's version of "look", adding a small piece of lore to the in-game journal. If you're in a hurry you can double click exit points to move there without waiting on the small creature's gentle lumbering gait to carry it to the other side of the screen. To work with inventory items, simply click on the crate in the corner of the screen (or right click anywhere else).

At the bottom of the screen are four runes, each representing a different element. Click on a rune to activate its power. If there's something on the screen that can be affected by these elements, you'll notice things change right away. The runes are incorporated into a few of the game's puzzles in some slightly unexpected (but still logical) ways. So, for example, if you see hot coals that just won't light, it's a fairly safe bet that activating the fire rune will get the job done. If you're ever stuck, think about the runes and how they might help! 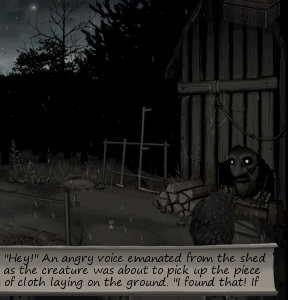 Analysis: It's easy to understand what kind of game Oknytt is — a retro-style adventure. Understanding what makes it special is a different story. The game is heavily focused on its characters and environments, not so much puzzles or creative gameplay. It's like a playable piece of folklore, complete with mischievous miscreants, quietly observant beings, and benevolent magical spirits. Centering the story on a strange creature who knows nothing of the world it inhabits makes you immediately feel for its simple plight. Each puzzle you solve pushes you both in the direction of discovery.

Artwork, story and setting aside, Oknytt sticks pretty close to the basic adventure gaming formula. Puzzles are largely inventory based and require you to do a lot of walking and a bit of trial and error. The elemental runes add a nice sort of twist, but they aren't as extensively used as they could have been, making them secondary puzzle pieces at best. It's just as well, though, as the interface does have some speed issues, and using the runes takes a few moments for the game to stop and think.

Oknytt is an enchanting and very lovable game. It tells a good story and incorporates unique pieces of folklore that bring simple characters and situations to life. If you don't mind a slow paced adventure and are ready to settle in and absorb a game's environment, Oknytt will keep you happy all evening long.