You are the sole operator assigned to a spaceship carrying out a mission as part of the New Earth Federation Connected Worlds Project. You are assigned to search for viable dead planets and revitalize them for future Federation colonization operations. Unfortunately, you've forgotten a lot from your instruction manuals. But you have a whole spaceship filled with science stuff to play with, so hey, you might as well give it a shot! On the Edge of Earth: 5000 is a sci-fi adventure game by Roope Tamminen of Lakeview Cabin fame. It was originally developed for the Ludum Dare 48 game jam under the theme of "Connected Worlds". Use the [arrow] keys to move around the ship, with the down [arrow] used to interact with its machinery. You can also hold down while moving to run, speeding up the process. Figure out how all these machines work together, and you just may make NEF proud after all! 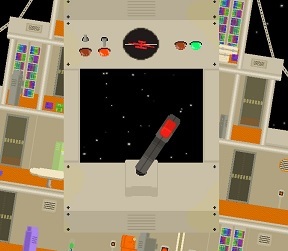 We've seen something of a spate of browser games like Generation Ship and Terra Coda, based around the premise of being dropped into an outer-space setting with a bunch of gadgets, tasking the player with discovering what they can and what they are supposed to do with all of them to make progress. Well, On the Edge of Earth: 5000 is one of the best. It has a sensible and detailed central puzzle to unravel, while at the same time throwing in all sorts of little red herrings and minigames to mess with that, while not impeding the implied narrative, does much to build the character of the setting. It feels a little unhelpful to boil a recommendation down to "if you like this sort of thing, you'll like this sort of thing", but On the Edge of Earth: 5000 is really meant for that group of gamers who don't mind a little tinkering and a little lack of direction in exchange for the chance to explore and play with an unfamiliar locale. (And, let's face it, if that group didn't exist, Myst wouldn't have sold approximately 30 kajillion copies.) This post-comp release has cleared up some of the glitchiness and narrative looseness of the original, so if you played the original and were unimpressed, it might be worth your while to check it out again. Now, if you excuse me, I'm going to go try to beat my ship's Rock-Paper-Scissors machine again. I just know that the 487th time is the charm!

On the Edge of Earth: 5000 Walkthrough now available!

On the Edge of Earth: 5000 Walkthrough

Beginning: What am I Supposed to Do?

PROJECT: CONNECTED WORLDS
Station-10B3
HANDBOOK
Congratulations! You have been chosen as the sole operator for Station-10B3. Your mission is to generate new life on dead planets for the expansion of THE NEW EARTH FEDERATION.
A guide for using the GENESIS missiles can be found on the next page.
1. Calculate distance using TERMINAL C.
2. Enter distance to the TERMINAL D.
3. Load a new GENESIS missile to the cannon, located outside. SPACE SUIT REQUIRED!
4. Adjust cannon to the correct pitch using TERMINAL A.
5. Use TERMINAL B to launch the missile.

You can enter the 'Home' coordinates (4, 7) to presumably call home.

Gained access to "locked" compartment (it's actually blocked by something) by going to the top deck and rotating the ship until those objects slide all the way to the left.

Currently trying to find out where I can eat so I can leave the ship.
Oh, remember to move the laser. Or you'll be horribly killed when you open that door to space.

Green box, one level up from bottom shows a banana. Up arrow to use it.

I think I missed something? I

blew up the moon

which apparently activated end game after I

There were lots of things that didn't make sense to me.

Who was the blue guy to the right of the space ship? What did the radio-like thing do? And what about the console that was broken (I think it was C- farthest right top deck)?

Maybe with a little more explanation I would really like this game, but as it is I was just lost.

The "broken" console with all the yellow lights is definitely C.

I'm not sure what the console in the "locked" room does, despite using it a few times.

I got outside and made the "laser?" go green.
If you need to empty your bowels, toilet is bottom right, lowest floor you can go.

I'm guessing the game is mostly trial and error.
Thanks for the advice on how to eat, I'd have NEVER worked that out on my own.

The machine with the lights is useless, ignore it.
Not sure EXACTLY what that machine in the "locked" room does.

The instructions lie, by the way.
The machine you want to put your co-ords into is

on the same floor as your bed.

The machine in the "locked" room has

5 settings.
I'm wondering if there are 5 different endings according to what it's set on when you fire.

The machine with lights isn't useless

You want to hit left and right on it. This gives you two numbers, which you can conveniently recall by pressing enter. As to where you put it in.

It seems to be the place with the 'locked' room.

The ending gotten this way says

I'm not sure what you mean by

the machine on the same floor as the bed. That seems to be the phone.

Yes, the terminal on your bedroom floor

is communication. You can call home on 4.7 and listen to your rugrat babble a little bit.

I was unduly amused by the trail of poo that drifted off to the starboard side.

Fun game, and I love the Solaris aesthetic.

Got an ending. Is there only one or more than one?

move the laser? I'm assuming that's why I can't open the door to space, since my levels are good and I'm wearing my suit.

Oh wait, never mind. In case anyone else is stuck on that:

Look for the terminal with the dial and the red line. Move the red line to move the laser.

Merchantfan, here's what I got:

I hit the planet with the green laser and it glowed yellow-white as if very hot. Then when I moved around, I sometimes staggered as if tired or ill, and did so more and more frequently. I went to bed. I woke up to alarms and the ship listing heavily to one side. I put on my spacesuit and went to the top floor to try to fix the tilt, and the terminal there said we were going to crash. We did. On the ground, I came out of the wreckage to find that my spacesuit was in tatters, I had no helmet, and I was in a light sandstorm. I found the little tree-toy from the ship, or a little tree in the same colours as I'd set it to, and it had bugs on it. Then I found a giant statue of my own toon's head half-buried in the sand and I Charlton Hestoned at it. TO BE CONTINUED!

I can't figure out how to fire the laser? I think I have done most things right.

I have entered the coordinates, been outside, turned the laser green. Went inside again and adjusted it to point to the planet.

I can move the joystick left to right using the arrow keys. But I don't know how to hit the fire button.

Fire button is the centre of the three consoles in the same room.

How do you make the "broken" console with all the lights work and how do you get numbers from it?

Because I've hit it all kinds of ways.
As far as I can see, it does nothing. Ever.

In re: the "broken" console:

Hit the left and right arrow keys really fast. That will shake the console screen and you should see something.

Also, if any admin are reading, I accidentally hit the "report" link on that comment and I didn't mean to. My bad, _mea culpa,_ whoops, etc.

I can't seem to get outside

My bowel and hunger levels are good, I have the spacesuit on, and I've moved the laser from the door. But when I press what I think is the right button, nothing happens.

On the Edge of Earth: 5000 Walkthrough

Beginning: What am I Supposed to Do?

PROJECT: CONNECTED WORLDS
Station-10B3
HANDBOOK
Congratulations! You have been chosen as the sole operator for Station-10B3. Your mission is to generate new life on dead planets for the expansion of THE NEW EARTH FEDERATION.
A guide for using the GENESIS missiles can be found on the next page.
1. Calculate distance using TERMINAL C.
2. Enter distance to the TERMINAL D.
3. Load a new GENESIS missile to the cannon, located outside. SPACE SUIT REQUIRED!
4. Adjust cannon to the correct pitch using TERMINAL A.
5. Use TERMINAL B to launch the missile.

You can enter the 'Home' coordinates (4, 7) to presumably call home.

Having satisfied those aspects, you just need to:

close the door to the left.
Don't want to space the whole station :)

If you look at your hand by pressing "enter" at the planet, your clock spins in fast-forward.

Yes, I noticed that too. I love little details like that in a game!

I was wondering what that space debris was floating outside. Just realized it's my own poop.

> Dora— It may LOOK like an "idyllic cottage weekend simulator", but this clever twist on a puzzle game is anything but. You'll have to figure out some way to survive the weekend using the limited tools around you, but beware... gruesomeness and red herrings abound.  ...

> Dora— If something is in your way, just change it! Nitrome puts a clever twist on the puzzle platform genre as you play a hero who can swap the properties of any two items. Turn dangerous spikes into soft clouds, or impassable bricks into collectible coins to boost your score!  ...

> Dora— A bread delivery goes wrong when you accidentally upset a cosmic beast that curses you and the world into bizarre upheaval! Rotate, blast, split, and puzzle your way through this creative and challenging platformer!  ...

> Dora— Holy sheep! Our favourite fleecy friends hatch a plan to get dinner that goes awry when they find themselves zapped aboard an alien spaceship. You'll need all your physics puzzle skills to have out three sheep work together to find their way home... and you'll even have to think with Portals in the process!  ...