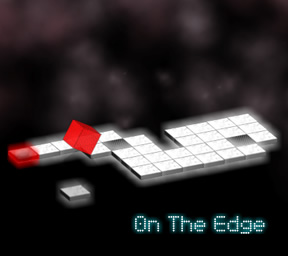 On The Edge is a new puzzle game from developer YZI Games. The concept is extremely simple: using the [arrow] keys, move your little red block from the starting point to the red ending point, all the while removing the white tiles behind you. Of course, since the white tiles are disappearing behind you, you can't go back on your path to catch other tiles. Doing so will result in a quick trip into outer space and a resetting of the level. The majority of the levels also contain black tiles. These tiles when rolled across once turn white, requiring a second pass to remove.

The levels themselves start out fairly easy, making the path to success pretty obvious and able to achieve within the first try or so. But soon the puzzles become quite complex, with large areas of white tiles and a few black tiles scattered about in order to make things interesting, or twisting paths of white tiles with holes and black tiles strategically placed on the way. A counter at the top of the screen counts down the number of tiles left to remove. That little red tile never looked so far away.

Similar in concept to Kyle Gray's Flip Out, as well as to Aqui Griffin's enQbate, an entry to our "GROW" themed competition in 2007. A couple months later, Damien Clarke's Bloxorz brought the puzzle game into the 3rd dimension and added the rolling box. The presentation here is very similar. With 30 levels to roll through, On The Edge will keep you scratching your noggin for a while. Roll on!

Play On The Edge

(Big thanks to Kero and Stacy G for the prior art research on this!)

Finding Hamiltonian paths on square lattices is reeeeeally trivial, at least when you're given the start and end points. Games like Block Drop (and the Gameboy game it's based on) realized this and added the double jump, which slightly complicated things. Without that here, there's no challenge.

Maybe not for you, Buttons, but there's plenty here to enjoy for a casual gamer like me. :)

This game is for squares!

Buttons, did you play all the way through? the triviality fades a bit once more specialty squares start showing up.

It's very nicely done, but so slow!

Are there any special squares other than the black ones and the teleports? I played just over half the levels but none showed up and I got bored. Buttons is right about how easy it is. Large sections of white may look daunting but you really have to try quite hard to go wrong.

Maybe if you couldn't return to black squares you'd turned white for a while? Then at least you'd have to plan ahead.

besides some great creepy music this is just a really minimal Hamiltonian path puzzler. There are PLENTY of games like this on the web, and I know I've played at least 2 or 3 of them here besides the 3 listed in the review. Tedium be gone!

This reminds me of the iPhone game, Edge. Awesome game that is unfortunately out of the app store at the moment due to a pretty frivolous lawsuit from some washed-up hack.

I didn't play far enough to see the teleporters, so if there are enough interesting tiles later, my earlier criticism might have been premature.

I dunno, maybe this is the experienced DRoD player in me talking. In that game, you're lucky to have as simple a task as dropping all the red tiles. More likely, you're simultaneously fighting off a hoard of goblins, hitting a orbs in sequence, obeying one-way tiles, and finding a Hamiltonian path.

I don't necessarily find it easy, but I do find it somewhat boring.

For example, one level started me off having to clear 6 blocks in font of me, before getting to content. Why? It's not like there was an alternative!

And then the whole field of pieces to remove just feels formulaic. I also dislike clearing out half a level, and the remaining half has a single, obvious path to roll through.

It does look nice and the play is smooth (if a little slow), though.

I have no actually played "Edge", the iPhone game that is currently down due to a lawsuit with "Edge Games" and Tim Langdell. However, I can only think of that game when playing this game "On the Edge". In fact, this game just feels like a total rip-off of every other game that does the same thing. As mentioned in the review itself, there are several other games that already did this. The main difference is here you are just 1 block (instead of a 2-block rectangle in bloxorz). Probably the worst part about this game is the name. Unless they are specifically trying to joke about the whole "Edge" incident (which they may be), calling their game "On the Edge" is so similar to "Edge" it's a bit sad.

Now, other than my issues with the title and the lack of originality, the game plays well and is fine for those looking to burn some minutes. So, I suppose it is successful. And besides, there are about a billion phyzzules (physics puzzles) and people still seem to find them enjoyable.

I'm a fan of puzzle games, however I feel that these type of games always lose me with a lack of originality. So much more can be done once the engine is done with a bit of creativity, I really wish people would take games to the next level after going through so much work of making the engine. Regardless of that, this game is well done for what it is, backgrounds look cool, and music fitting. It definitely works for what it is, but I just wish I could see more added on to the genre.

I liked bloxorz and though I'm not a puzzle guy I'm looking forward to this.

Hm. I got bored of this fairly quickly. I quit after level 16 (or so), where there was this huge swath of white tiles to the right, which I got rid of very easily. It was therefore a pain to have to get rid of all those tiles every time I restarted the level. Which was often, since in these types of games I often end up hitting the wrong key and falling right off the edge.

a little bit boring...but still can keep on...

Having previously enjoyed Bloxorz, I'd seen this billed as "Bloxorz 2" on some websites so I was looking forward to it. However, I was surprised to find it was fairly dull for the first 20 levels..

To anyone else who found it dull, I do recommend persisting though as some of the levels from level 21 onward are more interesting and challenging.

I agree that it's a shame to create a smart looking game engine and not do a little more with the puzzles themselves. Perhaps a collaboration between programmer and regular puzzlers would help in creating more interesting levels?