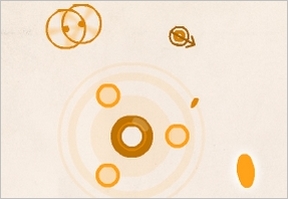 Orange, a follow up to the color-themed game Red, is another physics-based Flash project by designer Case. In the center of the screen sits a heavy orb. You control a mobile orange dot with the mouse and can fire shots at the nearest object. Move around the screen shooting at the orb in an attempt to push it off the playing field. Get too close, though, and its gravity starts to pull you in.

As you progress in stages your task gets much more difficult. Small orbs will start to appear around the large one and you have to avoid/shoot them as well. More devious foes eventually appear that home in on your location with frightening speed. Fortunately there is help in the form of a missile power-up that floats by at random. Shoot it to upgrade your weapon temporarily and knock the enemies off the screen.

Analysis: Just like Red, Orange is an extremely simple and beautiful game. The Japanese theme adds an extra layer of elegance and is quite fitting with the sumo wrestling-inspired mechanics. Orange seems to be free of some of the glitches that plagued its predecessor, but unfortunately some of the novelty wears off after a few levels. The difficulty ramps up fairly quickly and makes the game feel more like an action-based shooter than the atmospheric game it starts off as. Without more objects to contend with, however, the game would feel a bit too empty. It's a well-chosen and necessary trade-off. Nevertheless, Orange is a stunning game to experience and a treat to play.

Cheers to Phil for sending this one in!

The sound at the start of each level sounds like it's from Incubus's "Aqueous Transmission."

Oh yeah, the game! Pretty fun -- if you liked Red, you'll probably like this one. I especially liked

doesn't seem to load for me :(

@bart
@harukio
You need to click the armor logo for it to start.

I love this game... but not quite as much as red. It's a lot of moving and clicking, just as red was, but this time it seems slightly more repetitive. Nevertheless, a fabulous game.

this is a nice game, and it keeps itself in line with the frantic-styled shooter that red was... but the thing that really didn't make sense to me was the music. i'm over here clicking my mouse to death, and the game conveys a zen-motifed piece back at me. it just didn't really match the game, in my mind.

I enjoyed Red more. Like others have said, it gets a bit repetitive.

I liked this, looks simple, but includes lots of good ideas.

I've tried this game on a lot of different websites, and people never quite liked it. True, it may not satisfy the ravenous appetites of those who hunger for fast paced shooters such as Red, but this one is still beautiful. I suppose that the developer of Red was out of ideas by the time he got to Orange, so i don't blame him. I have to admit, Orange can't take the place of Red. Beautiful game, needs a few more "rewards". I wonder if Case will continue and make something better for a "Yellow". He seems to to be going with the idea of a non-violent shooters blasting at circular objects.