Orbital Defender is a great looking planetary defense game from Addictive Zone that has been acutely tuned for ease of use on mobile devices. As a lone satellite orbiting a single planet, it's your job to keep the rock safe from asteroids, comets, UFOs, and more nefarious dangers as you circle the planet over and over again. You can't move, only shoot, and since firing at your home world is a very bad idea, you have to play a little game of strategy as you blast foes each time you swing by. 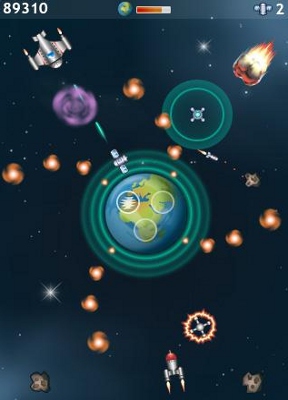 Our first stop on the orbital defense tour: Mercury. The tiny planet isn't under that much danger, so the first few levels serve as a good introduction to the game. Simply tap the screen where you want to fire and the satellite sends shots in that direction. You have to predict where targets will be when your weapons make contact, and you can't fire through the planet without damaging it, giving the game a smart slant as opposed to a "tap all the spaces and win!!!" sort of mentality.

Floating amongst the enemies, you'll find power-ups that repair the planet, allow you to move faster, or boost your weapons with sets of missiles. Planets also have some defenses you can utilize, such as the dust cloud which you can drag into space to slow down oncoming foes. Unlocking and using these powers really ups the coolness factor of the game, and they're provided at a decent pace so you're never in want for a pick-me-up when you need one.

There are currently around 20 levels to play, five for each planet from Mercury to Mars. The larger gas giant levels are teased in the game's menu but promised for a future update, which at the time of writing has yet to arrive. It's a bit shorter than you'd like, as the action really gets going towards the end and the game gets even more enjoyable, but it's a great start, and one you'll blaze through without thinking twice. And before you start wondering, no, it doesn't seem Pluto was counted as a planet. Sorry.

A great fit for a mobile game, Orbital Defender makes touch screen satellite-based planetary defense an attractive and awesome experience. Set your device down, place both hands at the ready, and defend our solar system!