OTTTD (Over the Top Tower Defense)

Tower defense games on mobile devices are about as common as ice in an igloo. That's why SMG Studio decided to go all-out with OTTTD. And by "all-out" we mean they crammed in everything they could think of to create a defense game that really is over the top. You'll like it, though, because all of those elements work together to add excitement and depth to a genre that desperately needs a rousing punch in the gut. 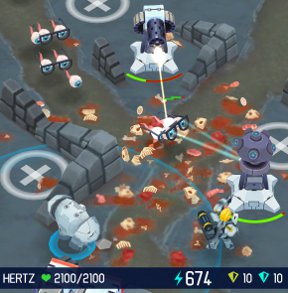 The core of OTTTD is a bit like Kingdom Rush, only with a sci-fi slant and more than a few slices of humor thrown in. You control squads of hero characters who move around the map attacking or unleashing special abilities. Each character has their own stats, weapons, skill trees and tower loadouts, all of which you can upgrade or swap out between levels. Creatures crawl across the pre-determined paths and meet with your barrage of tower flak set up by tapping open areas on the map. Upgrade towers to keep the damage rolling in, and be sure to repair buildings before they go offline.

There are per-level strategies you'll learn to master in OTTTD, as well as the more long-term squad tactics you'll gradually get the hang of as the game progresses. It's the perfect set-up for getting you hooked in the short term, and even more perfect for keeping you interested in coming back for more. OTTTD is what mobile tower defense games should strive for, right down to the floating eyeballs wearing spectacles and the gory mess of creep parts on the floor.

How long is it, and how much variation in levels/tactics... Okay, I watched the trailer and saw a giant flying shark and I am a giant sucker. Buying it!