Out of Your Mind

Are you anxious? Nervous? Fidgety? Are you tired, listless, unpopular, and poop out at parties? Do you have any strange quirks or behaviors that you just can't explain? Forget Vitameatavegemin, the best way to cure these problems is by getting rid of Nega-Tics in your brain with a simple process known as Mental Flossing.* The Blissful Brain Holistic Luxury Spa is now open for business, and can help you drive these annoying Nega-Tics Out of Your Mind... 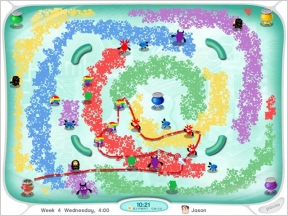 So goes the premise behind GameLab and Curious Pictures' game, appropriately titled Out of Your Mind. You play the role of the spa's newest employee, helping patients rid their brain of festering Nega-Tics and nasty brain gunk. While your clients may end up walking away with a new lease on life, something suspicious is going on between your employers, Belinda Blissful and Dr. Stroganoff...

In each level, you'll find some brain gunk and some Nega-Tics to be cleaned up. Nega-Tics are pesky little critters that come in a variety of forms, each with their own personalities and abilities. To clean the brain gunk, click on one of the colored spools of mental floss provided for you, and drag the line to thread a Nega-Tic of the same color. Then, form a loop around the gunk on the ground to clean it up. Remember that the loop must not have any other Nega-Tics inside it, or else the cleaning can't take place.

You'll quickly get the hang of mental flossing and the quirks of the Nega-Tics, but as you dig deeper into each patient's mind, more obstacles will hamper your efforts. Colored gunk can only be cleaned up by the matching colored thread. Mental blocks in the brain act as barriers to work around, sometimes creating a maze to trace or dividing the brain into separate compartments. Nega-Tics that are left to grow too large will explode in a blast of brain gunk. And to top it all off, Mega Nega-Tics can plague your clients by the dozen, and require extra efforts to floss out.

Don't worry though, there's help on your side! If you can floss up at least five Nega-Tics on one thread and form a loop, a Posi-Tic will appear in the brain. Each Posi-Tic has its own abilities, from the game-freezing power of the StaTic to the deep-cleansing scrubbers of the TherapeuTic. Use each Posi-Tic wisely to help clean the brain and eliminate the Nega-Tics. 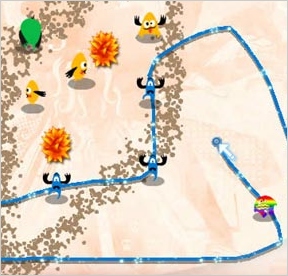 Analysis: It's interesting to think that about a decade ago, GameLab first introduced us to a game called Loop, which made one of the first displays of the use of drawn lines as a gameplay tool (in a browser game). Over the years, many other games have used a similar mechanic, such as Line Rider and Nitrome's Scribble, and it's nice to see it finally come around full-circle once again in another GameLab game.

However, this "string theory" is nowhere near perfect. You need to learn how the floss works rather quickly, because there are some slight flaws in the system. Threading a Nega-Tic right next to your spool sometimes registers as a loop right away, even if you haven't made one. Stopping and starting while pulling a thread can also have a similar effect. Nega-Tics and Mega Nega-Tics can be pushed around using the tip of the floss, but sometimes, they may jump over the floss line, ruining your empty loop.

Despite these problems, the game still overflows with fun. It's clear that the designers of the game had a fun time designing all of the Nega-Tics and their quirky behaviors. While some levels might get frustrating after a few tries, I assure you, every level is beatable. And after you've cleared all of the levels once, the addition of the "Expert Times" gives you a second gunk-clearing challenge. If you want more of an endurance challenge, Try "Neverending Nega-Tics" and see how long you can last against constantly appearing brain gunk. With over 70 levels of gameplay, you'll probably be flossing for a long time.

So put on your rubber gloves, grab some floss, and get that gunk Out of Your Mind!

*Disclaimer: JayisGames.com does not recommend putting anything larger than your elbow in your ear.

Looping as a game mechanic has, of course, been around since 1982. Atari's arcade title "Quantum" was the first game to implement this mechanic through the use of a trackball.

I just want to be sure that Gamelab is not credited for inventing this system.

Thanks for setting the record straight, Brent!

I'll edit the review to make sure there's no confusion.

This entry is missing a "Download" tag right now. I think you'll want to fix that.

Oooh, never let me play this game again. I don't know why, but it's addicting, yet kills me inside. After beating a level (tues week 2), with ZERO seconds to spare, I had the weirdest and most uncomfortable ever feeling in my abdominal area. And then a day or so later, when everything seemed to get big and explode instantly, I almost went into a rage, and turned it off. Good thing I had only 3 minutes left of the demo anyway. Late night frustration ftl.

And also, do not play this with a touchpad on a laptop. That did not help me get any less frustrated ;)

this game really rocks. it's funny, intense, and challenging.

Ooh I loved this game.. Was so disappointed when my trial finished.. very frustrating at times.. but not that frustrating that you want to stop..

So addictive!!!. one of the best games I've seen in a while

Nice gameplay. Very interesting theme however. I know some people will heavily repel any opinion that will say game content is interesting with arguments, "but I don't shoot people because I play counterstrike", or "I don't throw bananas after I played mariocart". In my opinion however game content is still very intesting of the values/ideas transported in the background. Its like a movie, of course I don't kill anybody because I've seen Schwarzenegger doing that, but what kind of movies a society likes to view, does say something about the society. Not?