Paper Galaxy from Liquid Entertainment is an arcade game that's just about as charming as a game can be. Once upon a time there was a happy little blue-eyed moon named Luna. While momma Earth was snoozing, Luna caught sight of a beautiful space butterfly. As she followed it,

she encountered some space dust that gave her a terrible case of the sneezies, propelling her off into the wild yonder. Now, lost in the cold blackness of space and far from her home, Luna needs to find her way back, navigating an array of planets, black holes, comets and other obstacles using little more than the power of her own sneezes.

Running a bit like Jetpack Joyride in basic nature, each round of Paper Galaxy has the overall goal of traveling as far as you can, as fast as you can. Luna starts with a bit of momentum, and whenever she brushes by a planet she automatically enters orbit. Wait for the right moment and tap the screen to sneeze and break away, jetting into space and hopefully getting caught in another planet's gravitational pull sooner rather than later. 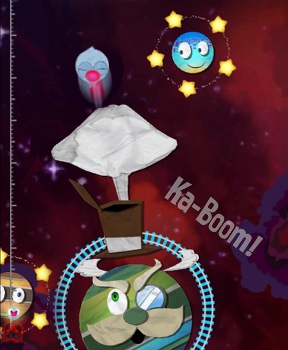 You see, the gigantic and not-so-cheery Crab Nebula is after Luna, and in order to stay safely ahead of those snappy claws, she's got to keep her speed up. Floating freely through space is the slowest way to travel, so you'll want to hop from planet to planet, following the space butterfly to gain a speed boost whenever you can.

To shake things up a bit, Luna can store up super sneezes that give her a big boost of speed. You can gather more sneezes by following the butterfly ten times in a row, hitting special smoke nebulas, or by, you know, losing a round and starting over from scratch. The upside is each time your game comes to an end you get a chance to shop at the in-game store. Most planets you orbit have a few stars in their pull. Stars work as currency, allowing you to purchase upgrades like more sneezes, controllable sneezes, new planets, more frequent beneficial planets, or even tinker with a few of the game's basic rules, like losing speed while free-floating. 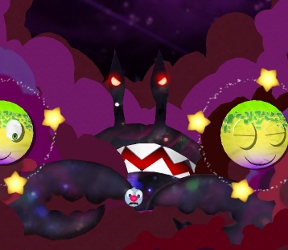 Analysis: So. Adorably. Cute. Paper Galaxy looks like a box of construction paper clippings spontaneously arranged itself into a little galaxy of happiness, complete with big-eyed planets, malevolent black holes, grumpy suns, and one sneezing little moon. You won't be able to take your eyes off of this game, which is good seeing as how it's all about proper timing. But, you know, it doesn't hurt that it looks so gorgeous.

If you're worried Paper Galaxy is a bit too straightforward in its objectives, you'll be pleased to know each time you make a run, you'll have three optional goal to complete. Things as simple as orbiting certain planets or gathering a number of stars start you out, but with 130 goals to complete in all, they get quite a bit more creative later on. Just another excuse to experiment a little instead of powering through to get home.

Paper Galaxy is incredibly charming and creative, and despite being a good old fashioned arcade game at heart, it ends up being quite a relaxing experience. Sailing from planet to planet, gathering stars, watching planets snooze, and freaking out when the space crab comes near, it's all part of the fun.