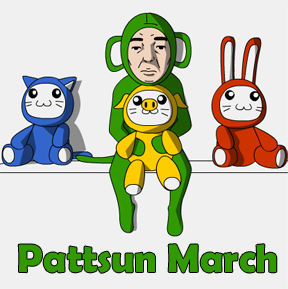 It's safe to say by now that Detarou has lovably weird down to an art. Nowhere else but in those strategically crafted, surreal worlds could you catch yourself thinking "Well of course that swarthy ballerina has my cable, but what color was the monkey again?" Even more strange, yet endearing, characters (and the return of an evil panda lurking behind their amusing facade) await you in Detarou's escape game, Pattsun March.

In tradition with the Detarou canon, puzzles follow a bizarre sense of logic for the most part, and you'll have to rely heavily on your problem solving skills. Being able to observe your environment, translate those often absurd elements into necessary clues, and apply them to practical use are the keys to open the many locked doors in this maniacal morsel of a room escape. Keep your eyes peeled for helpful hints and a wary cursor over that save button ready for potential hazards. Once again, you are assisted by the handy-dandy changing cursor, but the clean design makes it hardly necessary while there is nary a pixel hunt in sight. So put on your smarty pants and equip those thinking caps, folks. If you want that oh-so-rewarding feeling of finding all three endings, you're gonna need 'em!

Yay! Got 2 out of 3 endings with no walkthrough!

only used the walkthrough for the red stamp ending

the game does not load. anyone else getting this? i tried in IE 9,Googloe Chrome, and Firefox.

Nope, game is loading for me. What server are you hitting when clicking on this link: http://debug.netdna-cdn.com/

it's only detarou games. i tried tomatea and a few others and it works fine. the link you sent jay didn't work either.

[Then I don't know, Paul. That link is to a content delivery network, which has multiple servers around the world. I don't know how that link wouldn't work for you. And if there were a problem with the CDN, I'd have receive other reports of games not working, images not loading, but I have received none. -Jay]

hmmm that's just weird. i hope it correc6ts itself by tomorrow.

Maybe there's something in the SWF that prevents hosting on a different site? I always go directly to Detarou's site to play every time because of a similar issue.

[I've switched the links to point to Detarou's site instead, and will do so from now on in case that is true. -Jay]

I have the opposite trouble: I cannot play Detarou games on Detarou's site.

It's not just the game not starting... it's the whole webpage not opening (this is the case for both Firefox and Chrome; I haven't tried IE because I don't want IE on my computer).

[I'll keep the games hosted for anyone who can't play them on Detarou's site. https://jayisgames.com/games/pattsun-march/ -Jay]

it's working fine now. last night not only was detarou games doing trhis but mskutnik and a couple of other point and click brands were doing it as well. not only that but when you entered the site, most of the pictures were gone, like the casual gameplay picture etc. they are back today though.

2nd pattern. according to the solution in the picture it's supposed to make a red stamp appear but nothing happens. Did i do something wrong? i copied the pattern like it showed.

Thanks for pointing that out, Paul.

It turns out one circle was missing in the original screenshot, which has now been replaced.