In the five years following the conclusion of The Beast, Alternate Reality Games (ARGs) have arguably broken into the mainstream. While not exactly a part of the everyday vernacular yet, they have been steadily gaining greater visibility. For the better part of these past five years, ARGs have fallen into two categories: large, corporate-sponsored advertising campaigns (I Love Bees, The Art of the Heist) or smaller, player-run games (Metacortechs, Orbital Colony). 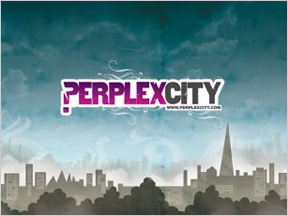 Starting last year, however, Mind Candy Design made the first concerted effort to break the mold: an entirely self-sufficient yet wide-ranging ARG named Perplex City. But if all of this history doesn't catch your eye, perhaps the $200,000 cash prize will?

The premise is simple. An item of great importance to the citizens of Perplex City, the Receda Cube, has been stolen and somehow smuggled to Earth. The leading members of The Perplex City Academy tasked with retrieving the Cube have made contact with a company named Mind Candy and are using them to enlist the help of anyone and everyone on Earth in the hunt. The reward for finding the Cube? $200,000. To publicize their plight, the Perplexians have been working with Mind Candy to release puzzle cards, available both online and at comics/gaming stores. Though these cards will familiarize you with Perplexians and their city (not to mention they're ridiculously fun), the real substance of the game is spread across a series of in-game websites.

Over the course of their investigation so far, Cube Hunters have found a variety of websites, such as sites for Perplexian record companies, newspapers, and personal blogs, each unlocking new mysteries to be investigated and puzzles to be solved. Live events, as well, including a scavenger hunt in London and a puzzle competition in New York City, have already occurred. To give you an idea of the size of the game, the London event ended with a mole escaping by helicopter and Morse code being flashed across the Thames. On a similar scale, one of the tougher puzzle card is being solved via a distributed cracking network (like [email protected]) hosted at www.13thlabour.tk, with over 1500 computers working towards a solution right now.

Even though the game has been underway for a little less than a year, catching up has been made relatively easy. At the official website, you'll find a series of slides introducing you to everything, followed by a series of links to summaries of the events so far in Perplex City. Just recently a podcast was added for those on the go. New events surface via the various websites every three to four days, leaving plenty of downtime in between puzzles to push this into "casual" game territory.

All of this, however, cannot do justice to the elegant complexity of the game itself. Think of this as the best parts of "Alice in Wonderland," "The Da Vinci Code," William Gibson's "Pattern Recognition," Michael Douglas' "The Game," and Kit Williams' "Masquerade" all mixed into a globe-spanning and highly interactive mystery/conspiracy/adventure story. Click.

I like the idea of (non regular) card games since i played the Auto Assault card game in beta a short wile back. http://www.autoassaulttcg.com/.

Now you have to pay for the cards. But I'm not willing to buy them for such a prize ;) So I dont think this game is for me, but I still think the idea is great. Especially with the $200.000 prize. But that just tells me that the cards are way too expensive (over-priced), if they are able to set such a prize for finding the cube :)

I might like to make a cardgame myself sometimes, in Flash. It sounds simple and can be very fun to play... and apparently a good source of income selling those cards ;)

I've actually had the cards for this sitting on my desk for a couple of weeks now, and your post reminded me that I ought to get some of the ones I'd solved filled in.

I'm now registered with the site, and have about 7 cards solved. My handle is 'MineForFish' if anyone wants to toss me on their tracked players list.

Also, if you're looking for the cards themselves, especially in the States they can be difficult to find. I bought mine through InSound and was pleased with the delivery time and service, so give them a look if this review piqued your interest.

Tsuken - The 'prize' that Ian spoke of is not the only thing the sales of the cards are used for. This is the largest self-sustaining game in the genre. It is not being backed by corporate monster money, so the sale of the cards have a lot more functionality to the project itself than it might seem. Aside from that, the idea in the genre itself is that the journey is the reward. Not everyone is turned on by the concept, but there are places you can be involved without buying the cards. Just do a search and I'm sure a few websites will pop up in that respect. Best of luck in your Flash venture card game, but I have to say you have the wrong impression of how this is being operated. For the record, I'm not involved in the making or playing of this game, but I am involved within the genre and well aware of how it operates.

Ah. Love this game. They had a live event in London(I tink it was london...)I love these kinda games the mesh fiction with reality. It's like that "somthing from a book/game coming to life" feeling. read the wiki article. Pretty interesting. I don't have the link right now..search yoself.

I've been playing this for quite some time and I just wanted to point out something to everyone reading this. You do not need to purchase the cards to follow along with the game. The cards are not neccessary for your participation. You can play and follow along with the game without having to touch a single one of the puzzles cards. One of the best things about ARGs is that they only cost you time

Well, now that the Cube has been found and someone's gotten the prize, this page might have to be updated. ;-)

I hear for season two they're doing something completely different. The first and second seasons have nothing to do with each other.

I bring sad news. Perplex City season 2 seems to have been put on ice indefinitely, due to some problems at Mind Candy Games.

Apparently they might not even be starting again, we might have seen the end of the game (although I hope not, and I have a nagging suspicion that they do have some plan to revive it).