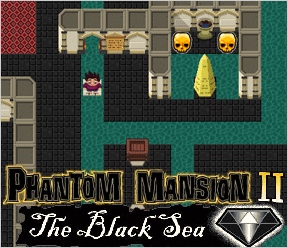 Spiky-haired Hector, hero of the previously reviewed Phantom Mansion: Spectrum of Souls, has returned in a new Phantom Mansion series beginning with Phantom Mansion 2: The Black Sea. Having found a map, complete with a glowing red X, Hector is sailing the first sea, the Black Sea, in search of treasure. Before he can get to the treasure, he must first find his way through a maze of locked doors, moats, and puzzles. The Black Sea offers 20 new and challenging levels and fun for all ages.

As before, control Hector using the [arrow] keys. The goal of each level is to collect all of the glowing skulls and find the exit. This isn't as easy as it sounds, though. Many skulls are hidden behind secret passages or in the middle of dangerous waters. By pushing boxes around, Hector can create bridges or trigger switches. Be careful! There are many ways to push a box in the wrong spot or to open doors in the wrong order. If you get stuck, you can restart the level or return to the main menu by hitting the [space] bar.

On some of the more difficult levels, Hector is presented with a new way to navigate: a raft. This handy device allows him to push boxes across water and access otherwise unreachable places. Combining several rafts even allows him to carry boxes across large bodies of water.

Since the Black Sea is only the first installment in a series, it does not yet present the same spectrum of variety as its predecessor. Still, it offers some replay value on its own, allowing you to repeat levels to beat your best time. Thankfully, most puzzles do not depend on speed or timing, but rather planning and logic. Also, the tutorials are unobtrusive, with tips and suggestions posted on scrolls, hung on the walls in each level. The brave can easily skip these and move on with the puzzles. By the time the puzzles become exceptionally difficult, there won't be any friendly advice-giving scrolls around.

Stretch out the Halloween season a little, and play the first installment!

Cheers to Oliver, Hollyrr33 and Aurorab for sending this one in! =)

Anyone figured 'Bottleneck' yet?

Anyway, anyone figured 'Bottleneck' yet?

I can't wait for the second installment.

Phantom Mansion: Treasure of The Seven Seas #1The Black Sea
#2?

Just got to level select, and I see Hector has gotten better Graphics. even an idle move!

R.J.: Go here for a list of planned chapters.

Personally, I like the idea of porting Spectrum of Souls to the DS/iPhone. :D

@bloohoo - Good idea. I would love to have this game on my iPhone!

I got bored with the last installment (Black Sanctum). This is good for a short break, but not for extended play... I tend to play games on my phone as a way to kill time.

I did enjoy this sequel, though. Enough of a change from the original, I guess.

I'm stuck on the level in the picture.

I finished the final stage. It was very confusing and difficult but I got it done. Can't remember how it was specifically done but I might run through it again to do make a walkthrough of final level... And i think entering either door at the end leads to same ending.

already stuck at level 2 and 3!(water and rafts & tying it together)...maybe is there something i don't know about rafts?help me!

Great little game, figured it all out except for snake road, but I am glad you can get stuck on one level and still be able to continue on. All I can say for those needing help, in the later levels placement of the raft is everything.

1. Use the raft to go right and hit the permanent button, making sure the raft will be on right of the wall when it closes.
2. Push 2 of the 3 blocks that were around the button to the left and make a bridge down to the plus key
3. Using the raft, go to the bottom right, and with the help of the key, use the blocks to make 2 bridges out to both the skull and other key.
4. Go back to where the cross key was, and use the circle key to get the skulls
5. Go back over by the button and use the last block there to make a bridge to the exit door, and finished.

This game was fun but too easy, even the later levels were quick to figure out and move on. The only real enemies were arrows, nothing like the previous installments with ghosts and skeletons and such. Here's hoping this series continues and gets a little more difficult. I managed to finish the whole game in one sitting at my desk at work.

I'm now stuck on snake road. it's like that one level in magneboy from Nitrome but alot harder!

For those stuck on snake road:

Make an reversed S snake shape between the two buttons using the blocks on the islands. You will end up with one gap.

Put the raft level with the middle of the snake to the far right. Use the first of the three blocks from the right to make a link to the snake.

Push the third block around the snake to the button on the bottom right. Get the skulls.

Push the third block around the snake to the button on the top left. Escape.

...Yay! I haven't been around JiG lately I was not expecting to see this, but I'm happy that I did. Ever since I finished the Black Sanctum I've been waiting for more.

Can anyone help me? I'm stuck on the Water and Rafts level. It only has the one box that I can see, and it seems that once it's been pushed into the water, that's it.

I am stuck on castle moat any help with this one

I'm still stuck on snake road. Could you add a little more detailed info please? -Like what should the reversed s snake shape look like- large or small curves, starting from what point and ending where.
Pleeeeeeeeeeease help? I'm getting frustrated here.
THANKS!!!

Push the first box in the sea "on" the skull...and then you'll also get the key, later: do the same with the skull to the left...
Use the box near the sign to avoid being shot by the arrow.

please, i need help with the level "Advanced Planning", please email me if you have suceed it.

What is this piece of stupid glitch? I can only play from beginning, saving works only until I quit first time. If I return later and try to finish further levels, game freezes at the end of any level. Isn't someone supposed to test games before releasing them?!