Bolt Creative, the studio behind the strangely captivating Pocket God series, is up to something a bit different. Pocket God: Ooga Jump takes a turn from the previous sandbox games in the series, dropping the poking and prodding in exchange for a little tilt-based endless jumping. The same characters and moderately twisted sense of humor, only now you're helping the pygmies out instead of, you know, zapping them with lightning. 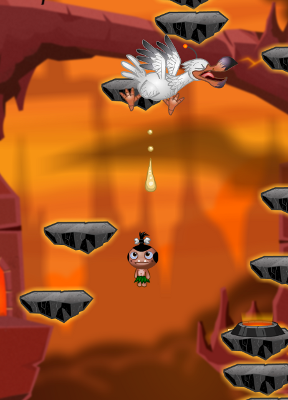 Tilt your iOS device to move the jumping pygmy left and right, aiming each descent to land on a platform so you can continue upwards. Tap the screen to slam down on a platform, a move that lets you smash certain objects as well as get a slight boost in your leap. Gather as many gems as you can along the way, as you'll need them to purchase items in the shop as well as to complete certain missions.

Pocket God: Ooga Jump does a great job introducing twists and turns in the gameplay. Dangers await you every few screens, such as monkeys giving chase, meteors falling out of nowhere, a robot trying to kill all humans, and even reverse gravity situations. Progress constantly moves forward despite these obstacles, increasing the difficulty with each jump.

Pocket God: Ooga Jump does a really nice job transitioning the franchise to a new genre. It features a handful of in-app purchases, which feels a little superfluous, but it doesn't get in the way of bouncing and having a good time. It's not a groundbreaking game, but Ooga Jump does endless jumping right.