When your name is Van Helsing, you know you can't have a normal life. You might be an ordinary girl, going about your business, staying out of trouble, and then one night you'll have a vision of a gate to hell opening and things will take a messy turn. In the new hidden-object adventure by 8 Floor Games, Portal of Evil: Stolen Runes, Vanessa Van Helsing takes on a difficult task of restoring peace while dealing with monsters, vampires, mysteries and intrigues. After her unsettling vision, Vanessa travels to Italy where she is invited by an arcane religious order. Her grandfather, who went missing some weeks before, belongs to the order and she hopes to find him. Once there, she finds out that matters might be a tad more complicated. 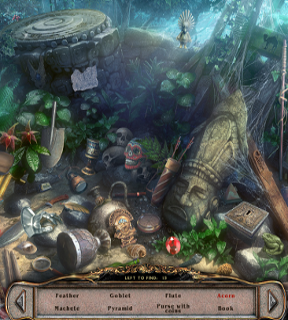 The quiet and unassuming town cathedral hides a gate to another world, kept shut by seven seals. If those seals were to disappear, all manner of evil would come flooding out and everyone would, quite literally, go to hell in a handbasket. And what do you know, four of the seals are indeed missing. Vanessa's grandfather has already gone to try to retrieve them but hasn't returned, so Vanessa is asked to go after him, as she is a Van Helsing and, therefore, naturally gifted for all things supernatural. Each of the seals has a different power, and they have been sent to separate dimensions where they are used to summon forces of darkness. Vanessa must go through portals and into every dimension to find the seals and look for clues as to which member of the order is the traitor. 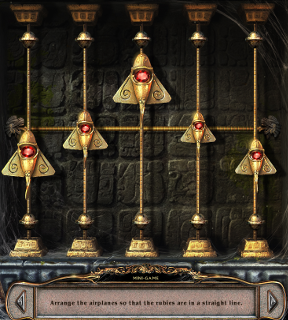 On the surface, Portal of Evil: Missing Runes is a standard hidden-object game. You are supposed to collect some items strewn around the rooms and landscapes, find others in hidden-object scenes and solve various puzzles. However, after a while it starts feeling more like a full-fledged adventure. Action cutscenes abound, giving a welcome shot of dynamic energy, and they are skillfully made and a pleasure to watch. Travelling to different dimensions means a wealth of diverse scenes and a meandering storyline that takes you through unknown lands and ancient history. The environments are gorgeous, from imposing, grandiose architecture to the forbidding realms of the Purgatory. The game puts some effort into keeping the gameplay interesting and engaging: the mini-games are varied and beautiful (though sometimes a little too simple), and there is that puzzly kind of hidden-object scenes in which, rather than taking objects away, you have to figure out where to insert them in the scene. There would be a lot of backtracking if it weren't for the map which allows you to travel to any room you've visited and tells you where there is something to be done. Probably the only shortcomings are the voice acting, which isn't on the same level as everything else, and the characters, who are pretty archetypal, but these are both minor flaws and are easily forgiven, given the overall quality of the game.

If you're looking for a game that isn't horror, but is also quite far from being light and fluffy, try Portal of Evil: Stolen Runes. It will intrigue you, excite you, entertain you and, best of all, you'll get to save the entire world from demons without ever getting up from your chair.

Portal of Evil: Stolen Runes is currently only available in a Collector's Edition, which includes a bonus level, concept art, wallpapers, strategy guide and more. Remember that Big Fish Game Club Members pay only $13.99 for Collector's Editions (or 2 club credits), and collector's editions count 3 card punches of 6 total needed for a free game.