Princess Isabella:
Return of the Curse

A long time ago, in a land far, far away, lived a lovely princess by the name of Isabella. Isabella was not your typical princess. Rather than spending her days languidly awaiting rescue by a handsome prince, Isabella took matters into her own hands and strode forward to unlock the curse, fight the evil witch, and rescue her intended prince herself. Now, a year later, the same witch is back and wreaking havoc again. The castle is again cursed, Isabella's true love the prince is missing, and worst of all, the evil hag has kidnapped Isabella's new baby for some nefarious purpose. In Princess Isabella: Return of the Curse the titular heroine is back and badder than ever in this fantastical adventure/hidden object hybrid by Gogii games. Oh, it is on, witch! 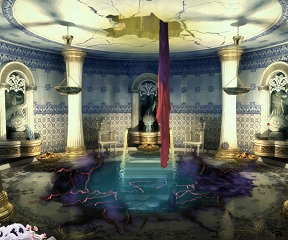 A bewitching animation at the beginning of Princess Isabella: Return of the Curse lays out the story in broad strokes — accompanied by a haunting version of "Twinkle, Twinkle Little Star" — and is guaranteed to pull you right in. The horrendously cute (and fantastically annoying) fairy guide from the first game immediately shows up and the player is off and rolling. With the help of your fairy companion (and another surprising addition along the way) it is up to the gamer to find their way out of the castle and through the kingdom, searching for the witch's lair and removing the curse upon the land along the way. You must find the missing prince, defeat the witch, and rescue baby Bella, all of the usual tropes of a classic (yet twisted) fairy tale.

Exploration is as simple as the click of a mouse as Princess Isabella: Return of the Curse plays out like a classic point-and-click adventure game. There are objects in each scene that may become useful later; some found immediately, some found within classic hidden object scenes, and some objects which can only be retrieved with the help of your companion(s), who have special powers that allow them to reach items that you are not able to. These objects will go into a handy scrolling inventory to be used at a later point in the game, whether it be to break a curse, rescue a villager, or unlock a helpful character whom the witch has frozen with another curse. 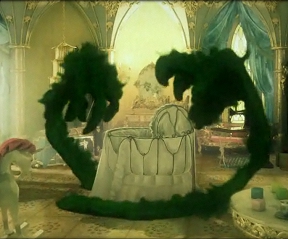 You will also pick up useful bits of magic left over when you break a curse, mini-spells that can transform the world around you in helpful ways. The useful and logically designed control system also includes a changing cursor to indicate areas of interest, a scrolling "task" screen which helps you remember what needs to be done, a useful diary that keeps track of information learned, and your companions themselves who among their abilities count the talent of a recharging hint feature. Rounding out the experience are a plethora of puzzles and mini-games that must be solved as well, although they can be skipped after a certain amount of time.

Be prepared, also, for other fairy tale icons to pop up unexpectedly, their stories intersecting with your own as Isabella fights her way to her ultimate goal. Can she rescue her family and save the kingdom in time? Will there be a happily ever after? Only time will tell.

Analysis: The first game in the series, Princess Isabella: A Witch's Curse hit the scene back in 2009 with a stunning array of fun puzzles and exceptional graphics, setting a standard that has not often been topped. Well, Gogii has definitely topped it with this amazing sequel. Attention has been poured into every detail of Princess Isabella: Return of the Curse, be it the backgrounds, voice acting, characters, storyline, animations, and gameplay. 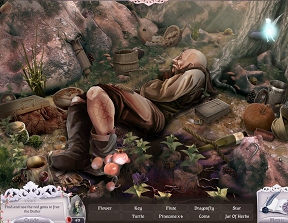 Some might miss the over-the-top baroqueness of the original castle, but the scenery this time around is still magnificent with each view having two different versions: the cursed and the cleared. Enough cannot be said about the ravishing graphics, from the control designs to the adorable animations and everything in-between. Princess Isabella: Return of the Curse is at once lighter (with much more sarcastic humor than the original) and darker (with the intense storyline of a kidnapped child) than the original. The darkness is especially ramped up with the musical accompaniment which weaves classic childhood songs into its themes. Once you've finished the game you may never listen to "Mary Had a Little Lamb" the same way again.

If there is one complaint that can be leveled against Princess Isabella: Return of the Curse it is that, like so many other adventure/hidden object hybrids on the market today, it is rather short. Playing time will depend upon the experience of the player, the choice of mode (easy or difficult), and whether or not you decide to spring for the Collector's Edition with its extra gameplay. On average the gamer can probably look forward to about three hours of solid gameplay, although the hefty "extra" gameplay in the CE will probably add another hour or so. For those debating whether or not the extras in the CE are worth it, in this case they most definitely are. The "extra" gameplay is extensive and includes some fantastic challenges and puzzles, along with a chance to revisit parts of the original lovely Baroque castle from Princess Isabella: A Witch's Curse.

A Collector's Edition is also available. It includes wallpapers, concept art, the music soundtrack, an amazingly hefty extra adventure that blends into the regular gameplay seamlessly, a wonderful animated teaser for the planned sequel, and a built-in strategy guide. Remember that Big Fish Game Club Members pay only $13.99 for Collector's Editions (or 2 club credits), and collector's editions count 3 card punches of 6 total needed for a free game.

Birth of the Dragon

Down the Chimney Hidden Object Scene

Outside the Dwarf House

Top of the Tower

Part 5: Entry to the Witch's Lair

I love hidden object games...and this seemed to be okay...but I finally had to stop.
That fairy is indeed annoying...so annoying to me that I quit the game.
Too bad.

Oh, come on Lsamsa...it is a wonderful game as was the first one that I played many times.

First rule as to not let the Fairy bug you is to turn off the sound. Second thing, which I hope will get you to continue the game is the Fairy's acquired abilities help Isabella and you with your quest to find Bella. Hope you will give it another shot after you read my spoiler comment. :)

You will get an adorable little dragon helper once his egg is broken. He has other abilities that will help you, and he will sometimes be around alone or working with the Fairy to help you complete your journey.

Birth of the Dragon

Down the Chimney Hidden Object Scene

Outside the Dwarf House

why does my fairy go away and leave me with this dragon?
how do I get the ability?

Jovie -
She will be back.

She went to help her people rebuild their village. Nessie has abilities that she does have, so you need his help while she is gone. When she returns, they will work together.

Top of the Tower

Part 5: Entry to the Witch's Lair

If you've placed all the parts for the mini game, it can be difficult to see depending on how Nessie is flapping his wings. It is at the top left by him.

Hi! I fed all the venus flytrap at once with the flies so by the tym i got around to freezing them, they were already finished eating so i only had 4 flies left...is there any way i can back out and start anew with the flytraps??? or am i doomed to start the entire game all over again???!?!??!! please help!!!

Scarlet -
Go back and get another batch of flies. I wondered why the fly scene was available to play twice. Thanks for the heads up. :)

The part where 3 gears are needed to open the door, I can only get 2. Also, when I leave the castle, more flies are always outside.

Cathy -
Read the previous 2 comments to find out about the flies. Check the Bonus Chapter walkthrough above, and it will tell you about the gears and how to use them.

I can't find the candle for the kings observatory.. Help!

I totally don't get the ending - did my dragon and the fairies betray me by sneaking off with my baby, or are they "saving" her and leaving me for dead (stone)??

JIGuest -
Would you not think that it means there will be another chapter in the tale to see what happens next. I'm looking forward to the next one, so hope you are too. ;-)

Please, how do I lift up the door? I mean, how do I get rid of the giant fly?

Have a look at Chapter 1, Floodgates in the walkthrough above the comments.

Great game but the dragon hatched but kind find him to feed?
I can't adjust the weights on the Castle door .?

I'm not sure why you can't find Nessie, but you might want to take a look at the last 3 scenes in Chapter 2 of the walkthrough above the comments. There is a description of what happens as he hatches, along with screenshots.

A screenshot of the solution to the gate weights can be found in Chapter 3 under "Open the Town Gate".

I can't seem to find one of the mirror pieces. The one circled in red in the walkthrough. I have been back and forth through all the scenes I have and no luck

You need to use the Diamond Ability on the areas in the Forest Path as shown in the previous screenshot in order to reveal it.

Does anyone know where I can find the heart key to get into the toy shop? Would really appreciate any help as I can't find where it's located after reading 3 walkthroughs. Thanks in advance.