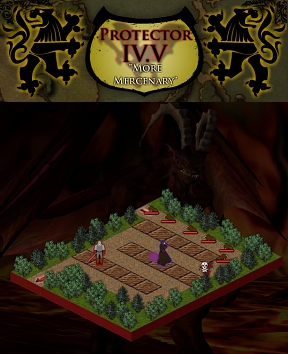 The Roman Numeral part of my brain tells me that the title doesn't quite scan, but the tower-defending part feels nothing but glee: Protector IV.V, an expansion pack for Undefined's popular fantasy tower defense strategy series has just hit the internet! It's nowhere near a sequel, but it has a host of new quests and all the exploration and variety the series has displayed so far. Those who were put off by the cuteness of Little Protectors should enjoy the return to form, but really, it's a treat for all strategy-lovers looking for an complicated addictive challenge.

As before, the factions of the kingdom of Arkandia are caught in a twistily-plotted struggle for power, and spoils are there for the smart and strong to grab. After a quick character-generation personality quiz, you are thrown right into the action. Using the mouse to select a quest from the map screen and three heroes to fight for you, you enter the battle map. You start by selecting a mercenary, then place their units on the grid-map by clicking, holding [shift] for multiple units and hitting the [spacebar] to cancel. Different mercenaries have different units with different strengths, weaknesses, attacks, defenses, and specials, the better to use against the myriad enemies you meet. Click the "Start Wave" button to begin the enemy charge. Succeed in defeating all enemies, and you will find yourself with loot (to buy new units and level them up, along with store goods), experience (to upgrade individual units), reputation and equippable items, along with the possibility of new maps to play. Really, this is just a basic overview: to truly understand all the aspects of the game, a quick run-through of its predecessor or a trip to the in-game Protectorpedia might be in order, though the gameplay is easy enough to pick up... after a half-hour or so. Sadly, you can't load a save game from Protector IV, the result of some minor engine tweaks. But hey, if you don't like building armies from scratch, why on earth would you be a strategy fan in the first place?

Like the previous installments, Protector IV.V will not be for everyone: Its complexity makes for a steep learning curve, especially if it is your first look at the series. Even those familiar with the concept may wish for easier item sorting, a streamlined update system, a better sense of balance, a faster speed-up option or other nitpicks. Still, it has all the advantages of the game it is expanding: depth, customization, polish, clever writing (especially in the item names), and some cool art. I can't deny that Protector IV.V feels like "more of the same", but when it comes to quality, whether it's casual gaming or Grandma Tricky's Pumpkin Pie, I never turn down a second helping.

Heh, the default name for your save file is "Urist McHero". I get that!
Good thing I picked Fire as my damage type of choice! Or, uh, maybe not...

I cannot get the game to load. Is there a problem with firefox or Vista?

[Please try reloading the page. Our hosting provider had some issues this morning with their DNS, which I believe are resolved now. If you continue to experience difficulty with getting any game to load, we have a support FAQ that addresses this issue with a variety of troubleshooting measures to try to fix the problem. -Jay]

think the green "Play Protector IV.V"'s url is mistyped. Gives me a protocol error. The image link works so I can still get access to the game.

My main issue with the game is that it starts out fairly difficult and ends up being trivially easy.

You are stuck with a lousy fire-based melee champ that you MUST use because fire is a common weakness in early fights.

The goal is to replace him with an archer champ ASAP.

The energy mage is awesome and you should keep her the entire game.
The mages hit extremely hard at 2 range and are great against armor.
Their debuff ability is incredibly strong and you almost always want 1 or 2 of them as the first dudes to attack the incoming monsters.
It literally increases the damage everyone deals vs the debuffed monster by about the debuff percentage...almost DOUBLE damage with a maxed debuff tree!

Archmages are a fantastic advanced troop with a range of FOUR. Crazy good. They hit pretty hard and the range makes them perfect for many maps.

What you really want are archer champs that have a Scirmisher or Archer as their basic troop. These are the range 3 archers. One has anti-air and armor pierce, and the other has um..something else.
As soon as you can get a fire-element one of these, you are in business.
Avoid the champs with mixed types.. i.e. an archer and a swordsman.

Gold is almost useless in the game. It takes FOREVER to unlock all the shops...you are stuck with 2 of em for 80% of the game!

As such, don't bother with Merchant skill. I'd recommend taking something different.

For your champs, you want to max their RANGED or MAGIC skill.
Really, the other skills are garbage. Well not garbage but just not nearly as effective as the damage ones.

A) is the winner! Upgrades are diminishing returns and the first 3 occur extremely fast anyways, and you NEVER get the XP to get the final upgrade.
Cheaper units seems tempting but limited squares and pave costs kill this one for most maps.

With the existence of armor, more damage is just the obvious winner. Get items that boost your damage (and -paving costs) and spend your XP on them.